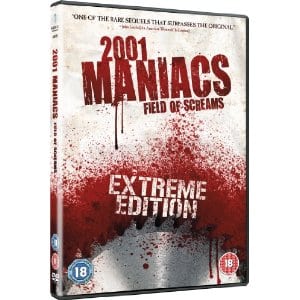 This is not going to be a long review.  Not that I can’t be bothered, its just I feel drained from watching too much disturbing imagery over the last few days.  I have tried to forget a certain film by moving onto lighter stuff.  Remember Me was what I thought a gentle love story but turned out to have quite a dark finale, Toy Story 3 had my emotions going all over the place with the storyline of goodbyes and fresh starts, and now this, the sequel to a remake of an original that were both not very good but stupid fun,  which I thought would be ideal to ease me back into the horror world.  How wrong was I.  This has to be the most sickening horror film I have ever seen.  I don’t think I have ever seen a horror that made me feel so depressed and a need for a stiff drink, oh wait…before you all go “not again!”, I do not mean in the gruesome manner, I mean in the idiotic sense of every scene sucks the life out of you for being so damn awful.  You think you have seen bad horrors then think again, this ladies and gentlemen is the film to end all films, its so bad I was debating on chucking on Serbian Film, just to lighten the mood and have some fun!

2001 Maniacs Field Of Screams according to John (An American Werewolf In London) Landis, is a rare sequel that surpasses the original.  Well that is what it says on the cover, but I love to know what he was smoking when he viewed this, maybe he had the wrong copy sent to him or something, because in all my lifetime, with all the straight to horror DVD shit I own and have seen, this is the worst my poor eyes have ever put their focus too.  I can not for the life of me explain to you in written words at how I sat there, too scared to move, thinking of actually ending it all than glimpse another scene.  The only reason I got to the end is because I knew I had to write this review, the sacrifice I make for this thread, my marriage is nearly in tatters because I do not go to bed with her at the same time anymore, her friends think I am some kind of deranged freak who watches too many horrors, “He is like Randy from Scream!” says her friends, “he was Randy until he discovered Empire” she replies, well someone has to warn others not to waste their life watching such dire film making!

Ok, I need to write this quick now, I can hear the wife and her long hard “sighs!” echoing down the stairs.  The film or plot if it has any, follows the same structure of the others.  A town folk who were brutality murdered, return as vengeful souls every anniversary of their death and throw a party in which some poor tourists stumble upon and get killed and eaten.  The re-make was daft but had Robert (Freddy) Englund in the lead role and some inventful death scenes that rose the level towards a decent watch. who lets be fair does not turn down much these days, must have himself read the script, saw how bad it was and run has far away as he could, which left the door open for Bill Moseley to jump in his place has Mayor Buckman, along with the returning Lin Shaye, who brace yourself, are you sitting tight!  In one scene, re does the moment, singing and everything, but instead of a bucket of water splashing down on her, its blood!  Yes, you did read that right, she also subjects us to a sex scene, her legs in the air, begging to be pleasured, and it was at this point I began to realise why Woody Harrelson was sick after he spent the night with her in Kingpin!

The film is centred around two girls who are being filmed for a TV show called Road Rascals, and from the off you know who they are modelled on!  Dumb and pretty, rich and famous, these two are no doubt supposed to be Paris Hilton and her once best friend Ritchie, but without the talent! Shit, did I just write that, I am rereading it and I did!  Believe me, them two especially Paris are in the acting worlds of the De Niro’s compared to how these two imposters act.  Its like they are standing there reading from an autocue, and I say reading lightly as the way they stumbled their lines made me realise my dog could do better.  Talking about dogs, the one who is supposed to be Paris also has a tiny dog underneath her arm.  Now firstly I admit I thought that so much money of the budget went on…er!…….hmmm!……..the crack cocaine for Landis to sniff to put his name to this film, that they simply could not afford a real trained dog, you see, from the very first scene you can the tell the dog is not real.  There she is parading it around like its alive, when we told that it is supposed to be dead, its just the girl loved the dog so much she had it stuffed, and now carries it everywhere!

Please, I know you may think I am making this up but I am not, and it gets worse.  The Friday 13th famous ca.ca.ca.ca.ca when Jason is around gets a remix here but comes across like a demented fart, ca.ca.ca.far…t…ca.ca.ca..ca…, we see do an oral hand job on a piece of sweetcorn which has left me with a severe case of impotence, (those sighs by the wife will sound more frustrated by the time this night ends).   Glorious Oscar winning lines like “Pearl, where are you, I will give a Pearl Necklace”, or a closet gay whose first kiss with a man has the immortal line “I am not queer, but I did not tell you too stop!” followed by knife in back and of the rather not so witty “I gave you Brokeback“.

Another thing, the film should have been called is Fields of Breasts, as every scene has woman flashing or getting touched, which of course may have not been a bad thing if it weren’t for my now sudden developed sexual problem….(oh the nightmare of that sweet corn)…..

I could go on and on, but I really don’t want to.  Its a friggin awful movie and you can tell that director Tim Sullivan tried his upmost to make it a B movie cult, but with acting that is atrocious from beginning to end and a script that manages to be racist and offensive to the disabled, there is simply no fun to be had, a sequel that will go down in my opinion has one of the worst ever made, and one that no one should waste their time with.

OVERALL: Simply put, the worst horror movie of the year, no, not the year, of the decade, its abysmal from start to end, a real trip into the terror of bad acting and Lin Shaye during flashdance in a not so sexy way……..

BEHIND THE MASK: THE RISE OF LESLIE VERNON: A HCF Slasherthon special feature looking back at the greatest slasher film no one as ever heard of!

BEHIND THE MASK: THE RISE OF LESLIE VERNON “That boy is about to seek revenge over the town that murdered him. He knows this, he says, because he himself is the heir apparent to […]

Two horror legends that need no introduction, Robert Englund (A Nightmare on Elm Street) and Sid Haig (The Devil’s Rejects), are lending their voices to a depraved new horror. However, this new horror film titled […]

Face your fears with the first trailer for ‘Fear Clinic’

The first trailer for Robert Hall’s Fear Clinic has just arrived, and it is glorious! The film is an adaptation of the popular Fear.Net web series, and stars legendary horror actor Robert Englund. The […]