HCF may be one of the newest voices on the web for all things Horror and Cult, and while our aim is to bring you our best opinion of all the new and strange that hits the market, we still can not forget about our old loves, the films that made us want to create the website to spread the word.  So, now and again our official critics at the HCF headquarters have an urge to throw aside their new required copies of the week and dust down their old collection and bring them to the fore….our aim, to make sure that you may have not missed the films that should be stood proud in your collection.  Here Dr Lenera reviews a film that could be described as one of the earliest slasher movies! 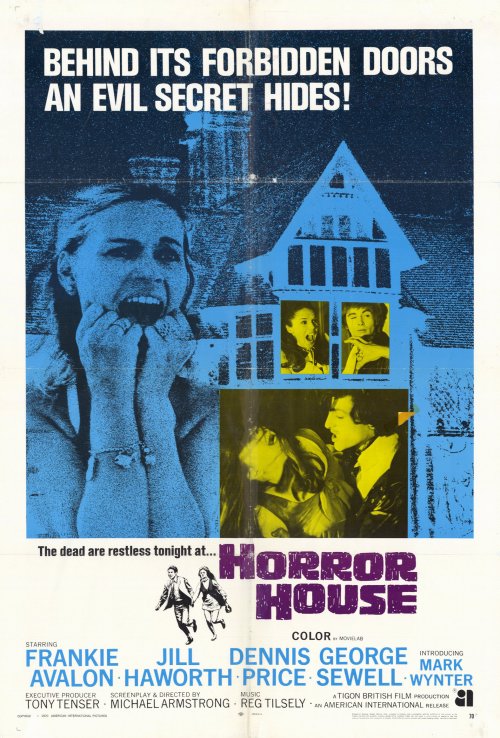 Gary is one of a group of friends who live around London’s Carnaby Street.  Gary is starting to date Dorothy but gets really drunk at a party and almost succumbs to his ex-girlfriend Sylvia, who is being constantly pestered by Bob, an older married guy who she had a fling with and dumped.  The party is boring so everyone decides to go to an old mansion that has been abandoned since a man killed his wife and kids twenty years ago.  Despite some finding the place frightening, they have a séance.  Foot steps are heard, and they all go in search of the person making them………

The Haunted House of Horror is one of those films that I’ve always intended to watch when it turns up on one of its quite frequent TV showings.  Unfortunately, up to now I’ve always ended up either forgetting about it or doing something else.  Well, I’m sorry to report that it was hardly worth the wait.  A historically important ‘proto slasher’ movie it may be, and it does have a cult following, but it’s also a mostly dreary mess.  One must say that much of this may be due to its’ very troubled production though.  Michael Armstrong initially wrote a script called The Dark, which was a combination of murder mystery and psychological drama set amidst the trendy Swinging London set, and it was backed by producer Tony Tenser and Tigon Films.  Unfortunately because of a battle with  AIP, who were distributing the film in the US, over the proposed insertion of Boris Karloff into the  film [something which Armstrong didn’t want], another producer called Louis M.Heyward took the film off Armstrong and Tenser’s hands and seemingly screwed it up.  Huge chunks were cut out, creating some continuity errors, and partially replaced by scenes of cops and Bob the spurned suitor of Sylvia.  Most of the cast were also recalled to film bits and pieces.  The resulting mess still managed to be a commercial success, especially in the US where it was called Horror House.  As it stands, it’s not very good, and I personally can’t find many traces of the supposedly really good film that it originally was [apparently it’s about two thirds original footage, a third reshoots].

The opening is rather effective, with a camera tracking towards a closed door behind which a man is making odd sounds which initially seemed to me noises of love making [or self pleasure], but I realised were just sounds of a nutcase being, well, a nutcase.  Then we switch to our protagonists, and to be honest, despite all the trendy clothes and groovy music, the film is a little tedious for quite a while, though the depiction of its young people is rather more convincing than in Dracula AD 1972, which the first half of this film reminded me off though that film of course was made three years later.  The scenes of Bob though do add a little bit of tension-from what I can see they did a good thing introducing this character.  After much soapy stuff they finally arrive at the house, and Armstrong fails to create much tension from his creepy set as the characters bicker and wander about.  Finally the séance is held and things start looking up, though it’s hilarious that the characters hear foot steps and are frightened and still ALL LOOK FOR THE SOURCE OF THE FOOT STEPS ON THEIR OWN.  Eventually we have a murder, positioned in the movie at around the same place as Psycho’s, but the film slides back into mediocrity afterwards, with lots of boring scenes featuring the dumb police, who always seem one step behind everyone else including us, and countless false suspense bits when you think the killer is walking into a room but it’s somebody else.

Two more killings do occur and things do pick up right at the end with a superbly directed scene where two characters are in one room and are talking to each other.  Certain shots and bits of dialogue alert us to the fact that either one of them could be the killer, and this is kept up for a few minutes in a really clever and tense sequence that for me is the only major indication that the original cut was something special, though the unusual and oddly touching final shots are interesting.  Two of the three stabbings in this are very brutal for the film, there is literally tons of blood and even a crotch stabbing, but really there isn’t much else of interest going on at all, except perhaps as a depiction of its time.  The film is undone by poor handling throughout, such as the score by Reg Tilsley.  It alternates between vaguely psychedelic rock and typical barnstorming horror stuff, but there’s far too much of it.  I do like lots of music in films, and one can forgive its overuse in very old films, but sometimes movies can have too much.  Here the scoring hardly every stops, even during dialogue scenes, and sometimes goes so over the top it’s laughable.  Some of these bits are accompanied by the kind of fast cutting that plagues films at the moment, though it’s fascinating to see it here and I wonder if the film originally featured more of it.  The script, as rewritten, does do a reasonable job of hiding the killer but there’s much that is vague and it seemed to me whilst watching that one guy was supposed to be gay but it wasn’t obvious.   Guess what, he was originally was intended to be gay and was to be played by David Bowie!

The top billed star of the film is Frankie Avalon, star of many teen movies many years earlier. Now I haven’t seen any of those films, which have names like Beach Blanket Bingo, but on the evidence of The Haunted House Of Horror he’s a pretty weak and bland actor.  Fortunately the person who plays the killer [of course I have to be vague here in case any reader does want to check out the movie, which is best bought in a box set with several other Tigon films, all of which are better than this one!] is very good and I reckon if you went back through the film [which I can’t be bothered to do] you’d see certain clues in his performance.  He reminds me a great deal of another killer in a film made the previous year.  Dennis Price, during the time he started appearing for some reason in loads of horror movies, barely registers as a cop though George Sewell is effectively cold and gives off a  certain sleaziness as Bob. Overall, though certainly not terrible, this is a pretty lame effort, whichever way you look at it, with just a few things of interest, and can it have been that good originally?

After years of rumours and speculation by his fans, cult horror movie legend Michael Armstrong has finally been lured out of retirement by Paper Dragon Productions to direct his first major feature film for over […]

Your Chance to Ask Horror Legend Michael Armstrong a Question!

Cult horror movie legend Michael Armstrong  (Mark of the Devil, The Haunted House of Horror) has been lured out of retirement by Paper Dragon Productions to direct his first major feature film in over forty […]

As part of his The Correct Perspective campaign for screen writers to be entitled to the same rights and appraisal accorded to stage writers, genre movie legend Michael Armstrong will make history by being the […]