HCF may be one of the newest voices on the web for all things Horror and Cult, and while our aim is to bring you our best opinion of all the new and strange that hits the market, we still can not forget about our old loves, the films that made us want to create the website to spread the word.  So, now and again our official critics at the HCF headquarters have an urge to throw aside their new required copies of the week and dust down their old collection and bring them to the fore….our aim, to make sure that you may have not missed the films that should be stood proud in your collection.  This week Dr Lenera looks at a somewhat forgotten horror mystery from 2006 to see if it perhaps ought to be better known. 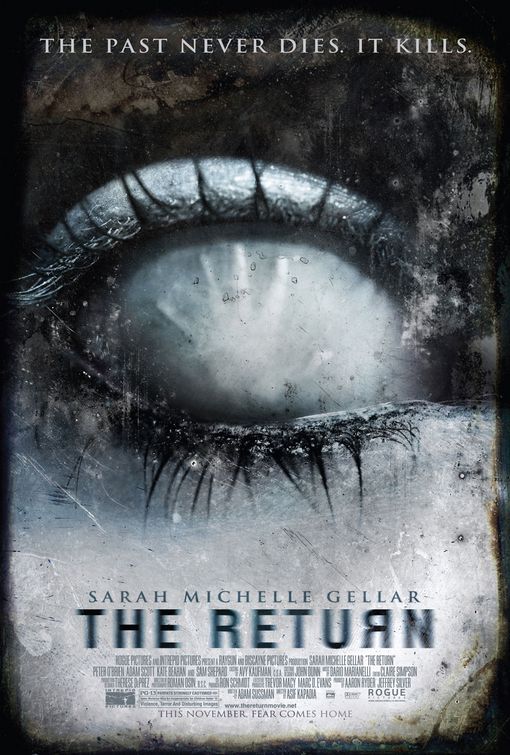 When she was very young, Joanna Mills encountered a killer and hid from him until her father appeared and the killer disappeared.  As an adult, she works as a sales representative for a trucking company but is sometimes compelled to harm herself and starts to have visions of the killer reappearing in her life as well as images of a town called La Salle.  One afternoon she travels to meet a client, then, after a disagreement with her father, visits La Salle.  She lodges in a hotel and meets Terry Stahl, who seems to be distrusted by the locals even though he saves Joanna from a violent ex- boyfriend.  She thinks she’s seen Terry before, but that is not possible, they’ve never met until now…………

Though as a film fan and now a critic, I shouldn’t be swayed by bad reviews, but I didn’t bother seeing The Return at the cinema, and only saw it for the first time last night.  I really wanted to like the movie, it seemed at first to be genuinely chilling and extremely intriguing without wallowing in gore and violence, but the plain fact is that it goes downhill for much of its length and just doesn’t work.  It’s essentially a psychological chiller with increasing supernatural elements, and as I write it I can’t really put my finger on why it doesn’t come off.  Screenwriter Adam Sussman got the idea from the death of a friend and wondered what it would be like if someone’s soul returned [though saying it, this idea has been done many times before!].  He then based his script loosely on several cases where what is shown to happen in the film supposedly happened in real life [just in case you do wish to see the thing, I don’t want to give everything away!].   It was originally going to be set in New York, but director Asif Capadia decided it would be more effective if set in Texas.  Filmed in several towns near Austin, the movie got a poor reception from both critics and audiences, though misleadingly advertising it as another Japanese – horror influenced film like The Messengers or star Sarah Michelle Geller’s previous hit The Grudge probably didn’t help.

It really starts off very well though and I wondered if this was going to be very good indeed.  The scene of young Joanna hiding from the killer is very tense and his whispering to her very menacing.  Then we cut to the present day, and, without much build up, Joanna starts to experience strange things which are at first very uncanny.  Patsy Cline’s song ‘Sweet Dreams’ comes on the car stereo and for some reason she can’t get rid of it,  a figure is stalking her at night, and one really unnerving ‘boo’ moment has her look in the mirror and another woman look back at her.  I was nicely on edge for about the first twenty minutes of this film, but sadly after this the film gets duller and duller.   More than two thirds of the film’s footage consists of Joanna driving and walking about – clearly Capadia and cinematographer Roman Osin adore Sarah Michelle Geller, but it gets a bit tedious.  The tension and atmosphere almost disappears, and while the story will just about keep you watching, the film doesn’t appear to be going anywhere.  Still, the climactic chasing around is quite exciting, and cleverly show us events happening from two different time periods simultaneously.   As for the ending, it does manage to be nicely open as to whether what you think has happened really has happened – apparently the R1 DVD has an alternative ending which is more obvious – and it does show  up some interesting and perverse possibilities!

Capadia stages the odd good sequence, such as a very tense set piece in a deserted factory, and makes the most of the Texan settings.  These musty old towns and the countryside , full of decayed industry, are always a great setting for horror films, as Tobe Hooper knew , and in fact visually The Return reminded me a great deal of The Texas Chainsaw Massacre remake.  The picture was ‘bleached’ after the shooting was finished, removing much of the colour and giving a sepia look to much of the movie, while there is also lots of black around the edges where you can’t see things clearly and even some scenes looking like they are in black and white.  Much effort was spent to make the film look interesting, it’s a shame little effort appears to have been spent on the script, which much of the time just meanders uninterestingly.  Perhaps this was supposed to evoke the slow pace of life in the town, but a horror film should have some suspense even when little is happening, and the film isn’t helped by having most of the male cast, who mostly speak in a Texan drool, quietly mumble their lines.  Sam Shepherd, who play’s Joanna’s father, might be a fine actor, but what’s the point if you cannot understand what he is saying half the time?  Of course the few ‘shock’ moments are extremely loud, but you tend to know when they are coming.  There are few surprises in this film, and in fact you’ll probably know what’s happening about a third of the way through.  I didn’t, but I was very tired, but as I think about the movie now, even I am aware that some things were not explained.  I know that is often a good thing, but here it just seems lazy.

Sarah Michelle Geller has never struck me as much of an actress, and it really shows here as she’s in most of the film, but isn’t helped by her potentially interesting character being undone by weak writing.  She might have all sorts of issues, some of which, such as self harming, some of us may have experienced, but you never really feel you know her.  Of course a strong actress will have attempted to fill in some of the blanks.  Peter O’Brien is good as the mysterious Terry though, really giving the impression of a guy who has suffered a lot by the way he moves and reacts to things, just watch his acting and compare it with Sarah’s!  Dario Marinelli contributes a fine score with has a haunting piano – led theme and some good exciting musical set pieces, though perhaps it’s too good for the movie!  I repeat – I really wanted to like The Return [what a dull title!], and it was obviously made with the best intentions, but it just doesn’t succeed.  Regardless of how little horror or menace there is, I just didn’t care two hoots about the characters and their troubles, and that’s probably the film’s biggest flaw of all. You could just watch the opening twenty minutes and the last ten though, that might be quite good!

When Buffy Slayed in Sunnydale! Ranking Every Season of Buffy The Vampire Slayer

It starts with a weird look!  Sometimes a smirk!  To even a comment that usually comes with “But you’re a man?  Are you serious?”.  To which I reply “Yes I am”.  You see when I […]

Oh No! Buffy The Vampire Slayer is Officially Getting a TV Re-boot!

In one of the most shocking TV news of 2018,  its been confirmed that one of the greatest shows of all time, Buffy The Vampire Slayer, is getting a re-boot. One of the biggest […]