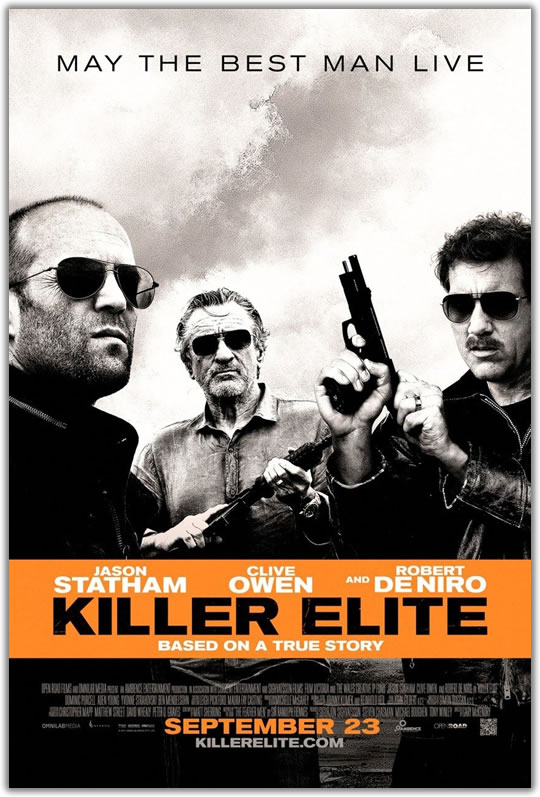 Danny Bryce is a contract killer who, after one particular mission where he finds a child in a car which he has attacked, realises he can kill no more and chucks it all in.  A year later though his mentor Hunter is kidnapped by an exiled oil sheik in Dubai and Danny is asked to carry out the tyrant’s request – to kill three SAS members who murdered three of his four sons.  Danny feels forced to comply and sets out to do the task, helped by old partners Davies and Meier, but has to contend with a secret society called the Feather Men and their own enforcer, Spike………….

When I first heard about this movie, I assumed it was yet another remake, this time of the 1975 Sam Peckinpah movie The Killer Elite, but it’s actually an adaptation of a 1991 novel by Sir Ranulph Fiennes [who is mentioned in the film] called The Feather Men, which he not only claimed was mostly true, but said that he at one stage a target for the killings carried out in the book.  One might think that turning such an incendiary, even political story, which alleged SAS involvement in things they denied and described the secret Feather Men organisation, into a Jason Statham beat-em-up vehicle would be a stupid endeavour that wouldn’t work.  Actually the result works very well indeed.  Killer Elite, unlike Statham’s last cinema outing Blitz, manages to balance what is expected in a Statham flick with a rather good plot that takes a few twists and turns and at times may even surprise.  I am not saying Killer Elite is Tinker Tailor Soldier Spy though – it is still primarily an action movie but it is one of the best seen so far this year.

We are immediately thrown into some action, with a rather intense gun battle and a hit that turns ugly.  This, as is sadly most of the action to follow, is shot with the usual endless close ups and quick editing that is de rigeur for such scenes these days, and rather than have yet another moan about this I’m just going to move on after mentioning that thankfully shaky cam is actually rarely present, so that’s one good thing [I do think it has its place, but not in normal action movies].  We are introduced to the very cliched situation of the hitman who wants a peaceful life and has to carry off one [well, five here, but you get the idea] more hit before he can settle down.  However, just when you think the film is going to be extremely predictable, it begins to get rather interesting.  The cat and mouse game that ensures between Bryce and Hunter may be none too original, but little happens the way you expect and the plot starts to go down interesting passageways.  There is one bit during the first ‘hit’ where the victim is tied to a chair and Bryce is about to bash his face in with a hammer, and you are left in no doubt of the ugly nature of Bryce’s job.  I would have liked the script to have taken this element further but it chickens out, probably correctly guessing that Statham’s fans don’t want to see him actually murder people like that.  Having none of Bryce’s targets actually die by his hand is either a nicely subversive touch or playing it overly safe.

Still, the film does succeed in making the job of the assassin look like the unpleasant business it is, with things constantly going wrong and tons of blood spattered about, and this is reinforced by the predominately dull blue and grey colour schemes.  People are neither proper heroes nor necessarily villains, motivations and indeed thoughts are murky, there is little brightness, because there are no heroes, and each violent act, no matter how well intentioned, causes successively worse violence to happen soon after.  This theme runs throughout the film, which also offers rather a sad view of even ‘licensed’ assassins such as the SAS, men who cannot escape their past and are closer to being trapped in it.  Throw in an Unforgiven style element with a too-eager young pup shocked after committing his first kill, and you have a movie which I probably make sound make heavy handed and depressing but it certainly isn’t.  The globetrotting, the pacing of many sections and staging of set pieces seems heavily influenced by the Bourne films, and though I don’t especially like the way first time writer and director Gary McKendry has gone for the close up/quick cuts style, he does it fairly well.  There’s a terrific fight between Bryce and Hunter about half way through, where Statham and co-star Clive Owen bash, pummel and bite the crap out of each other in a really vicious and realistic brawl that is possibly the best fight scene I’ve seen this year.  Otherwise it’s mainly shootouts with a bit of parkour thrown in, though Statham seems to quickly beat up a guy every five minutes!  Sadly the movie does seem to be building to one great big climactic action set piece which doesn’t happen, but I admire it for finishing more as a proper story, rather than as an excuse to blow stuff up.

McKendry’s script is a sometimes odd but never dull mixture of the familiar and the surprising – for example there’s the obligatory girlfriend who serves as the ‘hero’s’ redemption, but there’s also a Paris Metro stalking which ends in a really surprising way.  Something that certainly won’t surprise you is the Stath, who looks, talks and acts exactly the way he does in virtually every previous film he’s made, and would his fans have it any other way?  Owen, who I don’t really understand because he turned down the role of 007 yet seems to be in a fair number of action thrillers, does out-act Statham in their scenes together, though his role is simply a variation of previous ones too.  I loved seeing Robert De Niro have fun shooting and fighting – he spent the 70s, the 80s and some of the  90s giving us wonderfully detailed and intense performances, and has nothing to prove, so what’s wrong with him enjoying himself, and here, particularly in one scene with the surviving son of the Sheikh, he still gives his role gravitas.  Dominic Purcell and Aiden Young are also fine as Bryce’s partners.  I was really surprised by Killer Elite; I expected 100 minutes of the Stath acting tough and kicking ass and got, as well as some of that, a surprisingly intelligent and thoughtful effort that is so far possibly the best film that Britain’s Greatest Living Action Star has made.

As promised, Universal have released the official trailer for fast & Furious 7 tonight, knowns as Furious 7 in the U.S., and somehow this franchise just keeps on getting better. I am equally excited by […]

A good shark movie is just what the box-office needs and while we 100% certain that JAWS will always be the king of the underwater monster killer, the first trailer of The Meg looks like […]