HCF may be one of the newest voices on the web for all things Horror and Cult, and while our aim is to bring you our best opinion of all the new and strange that hits the market, we still can not forget about our old loves, the films that made us want to create the website to spread the word.  So, now and again our official critics at the HCF headquarters have an urge to throw aside their new required copies of the week and dust down their old collection and bring them to the fore….our aim, to make sure that you may have not missed the films that should be stood proud in your collection.  Here, Dr Lenera looks at a little known giallo from Lamberto Bava.

Three young boys walk into a dark, abandoned house and toss a tennis ball down a dark stairway leading to the basement.  One of the boys is told to retrieve the ball or he will be considered a sissy. The boys scream at the little blond boy “you’re a female!”, and the boy cries and walks down, and after a scream, a bloody tennis ball is thrown back up.  This turns out to be a scene from a film that is being made by Sandra.  She organises the film’s composer, Bruno, to stay in a large, isolated villa to get him into the proper mood to compose the music for the film.   Someone mysteriously slashes a magazine photo, then a woman called Katia jumps out of the closet, claiming to be a friend of Linda’s, the previous occupant.  After Katia leaves, she is brutally murdered, while Bruno discovers Linda’s diary…………….. 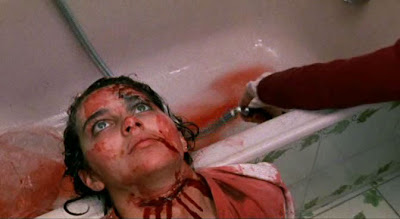 A Blade In The Dark is a seriously flawed but fun giallo which benefits from mostly taking place in one location and works up a considerable amount of suspense.  It’s certainly one of director Lamberto Bava’s better movies.   The son of the great Mario Bava, I’ve always felt that he was nowhere near as talented as his dad, but did make some enjoyable movies, especially the two Demons films, throughout the 80s before mainly making mediocre TV movies, though the last few years saw have seen a slight resurgence in his career.  Shot really cheaply using the producer’s house and a tiny cast of unknowns, A Blade In The Dark was actually originally intended to be a TV movie to be aired over four nights, but was considered too violent, so it was blown up from 16mm to 35mm and released theatrically in Italy.  Like many of Dario Argento’s films, its export release lost just some gore, but some other footage which the distributor’s wrongly considered slowed the film down, in this case lots of wandering around the house.  Overall thirteen minutes were cut, almost two of them violence.

The bizarre opening involving the three boys is very strange but in no way scary, which makes Bruno’s comment that the scene has scared him three times already hard to believe.  In fact, some might find the film hard to get into at first, chiefly because of the atrocious voice acting and dialogue.  Typically, A Blade In The Dark was shot silent, than dubbed into various languages, but the folk doing the voices here are especially inept.  It’s doubtful though that anyone could have done much with dialogue like “you’re cute”, “so are you”, and “I love musicians, they’re great in bed”, both bits spoken just after Bruno has met Katia.  Still, as the murders start the tension really grows and grows, making superb use of its principal setting, which seems to have every room in a different colour, many with missing doors and other oddities, which probably would not be a surprise to fans of Italian horror!   Though the film is leisurely paced, the sequences of Bruno and others searching round the house  are quite creepy and should not have been cut, and the plot moves forward well giving out clues in the accustomed giallo manner.  I must admit, I had it totally wrong who the killer was, but in retrospect I think many will probably work it out pretty quickly!

There are only four killings, but, at least in their uncut form, they are quite startling in their sheer brutality, with a wrench, a razor and reels of films [honestly] put to nasty use, and one killing in a bathroom, featuring a really hard-to-watch hand impalement, a plastic bag over the head and the head being repeatedly bashed on a sink, really rather shocking.  To me, these scenes show the influence of Lucio Fulci, though elsewhere Argento is obviously the prime influence, with many shots borrowed from his movies and some typically Argento-esque elements such as “did I see what I thought I saw”?.  The prelude to the first murder has a terrific use of music where Bruno plays the piece he is composing on the keyboard, then as we cut to outside and see Katia walking along, the same music ‘becomes’ the actual score for the film, gains a beat and becomes more intense as we build up to her murder.  This is Italian horror at its best, joyously over the top and wonderfully stylised, in no way realistic, just film making at its most exciting. Generally there aren’t really many stylistic flourishes that aren’t second hand, but the whole movie has a surprisingly lush feel considered it was originally 16mm.

Lamberto Bava paces his movie superbly – I imagine the cut version would not have worked nearly as well – and the cast mostly do well despite the dubbing.  Michele Soavi, who went to become one of the most promising of Italian horror filmmakers before also making mostly TV movies, has a major role as Tony the cop who befriends Bruno, and Fulci fans will notice young Giovanni Frezza from two of his movies.  The score by Guido and Maurizio De Angelis is sometimes just mediocre brooding synth chords but does have a fantastic and very catchy, if perhaps overplayed, main theme, which sounds like Goblin played by just a synthesiser.   If you’re not too familiar with the giallo but are a big fan of American slasher movies, A Blade In The Dark might be a useful way in to begin exploring this fascinating Italian subgenre.  If you are a fan of these movies, you should still have a good time as long as you don’t expect much originality or a lost classic!

AKA DEMONI Italy AVAILABLE ON BLU-RAY AND DVD RUNNING TIME: 88 mins REVIEWED BY: Dr Lenera, Official HCF Critic   Various people are invited to a special screening at an isolated and recently renovated cinema. […]

3D REMAKE OF ‘DEMONS’ COULD BE HAPPENING

Lamberto Bava’s 1985 flick Demons is to me, and I reckon to many others too, a wonderful guilty pleasure of a film. Yes, it’s ridiculous, but has a great premise, fun characters, terrific gore, and […]