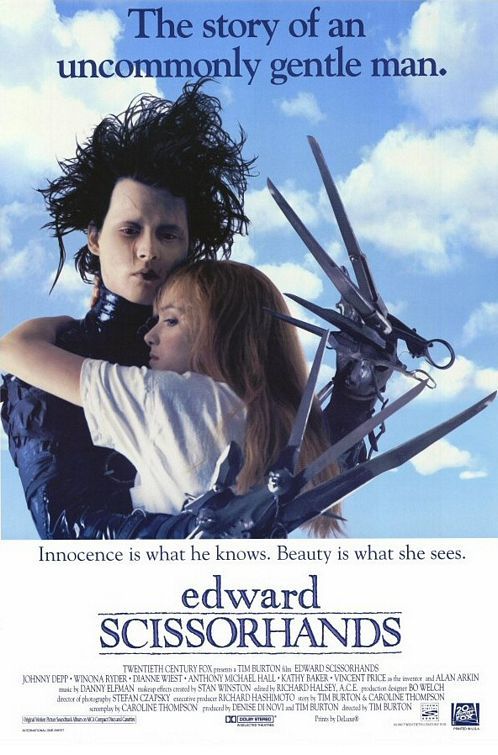 It is bed time, and a young girl asks her grandmother where snow came from.  She replies it originated with the story of a man called Edward who had sissors for hands and who was the creation on an inventor who died before he could finish him.  In flashback, local Avon seller Peg Boggs fails to make any profits in her neighborhood, she, on the strength of a whim, visits an old mansion located on a hill above the town. Touched by Edward’s loneliness, Peg brings him home to her family.  Except for a religious fanatic Esmerelda, everyone welcomes Edward into suburbia, where he is the talk of the area, but he starts to fall in love with Peg’s teenage daughter Kim……….

Tim Burton has made many wonderful movies over the years, but for me he will never top the masterpiece that is Edward Scissorhands.  Deriving from a variety of sources, from Being There to Pinnochio to Beauty And The Beast, but entirely its own story, it has the strength and power of a true fairy tale, a story told down generations which will always entertain but contains lessons to teach us all.  It starts with a fantastic opening, immediately setting a tone of wonder and fantasy as the grandmother tells her story and the camera swoops over Suburbia to the castle, alighting on Edward, staring forlornly out of the window.  The tone is mostly lighthearted at first though, with a superbly skewed vision of American suburbia, and it has some terrific laughs mostly derived from Edward’s getting used to his new world, but it takes a turn for the downbeat in the second half and becomes incredibly moving, with a finale that is as touching as they come.  The best moment though is a little earlier, when Edwards ‘creates’ snow from a sculptor of Kim and she dances in it; this is one of the most beautiful moments in cinema, totally simple but saying so much.  Undoubtably set in its own fantasy world, with characters who are archetypes rather than fully rounded people, but containing often unpalatable truths about human nature, it is deeply sad, and still makes this critic cry [I have no shame in admitting!], but also contains hope, showing us that, no matter how much cruelty and nastiness there may be, some goodness and love will always flourish and make some difference, no matter how small.  Edward Scissorhands has a performance from Johnny Depp which is still one of his best, exuding so much emotion even when buried under tons of makeup, and often acting chiefly with his eyes, while Danny Elfman’s much copied score is one of the greatest film soundtracks ever written.  When writing about films which are all-time favourites, it’s often hard to be subjective or even write a good review, and such is the case with Edward Scissorhands, a film which affects me personally in a way I can’t really put into words.

Director Timur Bekmambetov’s Abraham Lincoln: Vampire Hunter is going to be all kinds of awesomeness, no question. Each and every piece of news I have covered just gets me more and more excited to see […]