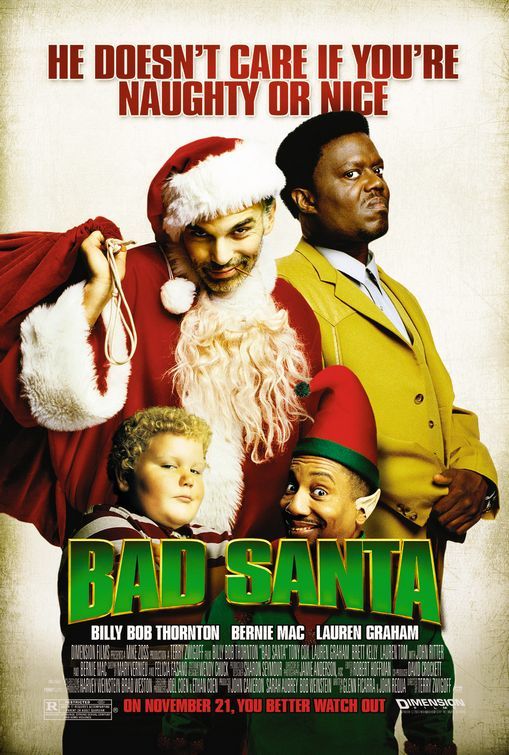 Willie T.Stokes is a heavy drinking, promiscuous, child hating crook who works every Christmas as a shopping mall Santa with his dwarf friend Marcus.  Every Christmas Eve they disable the security alarm after hours and rob the mall; Marcus returns to living with his wife Lois, while Willie blows his money on hedonistic pursuits.  One Christmas, Willie’s drunken rants arouse the suspicions of the mall manager who gets the security chief to keep an eye on him, while Willie, reluctantly on both grounds, starts to from friendships with Sue, a woman with a Santa fetish, and the Kid, a lonely unpopular boy living with this senile grandmother because his mother is dead and father is in prison.  Could Willie be starting to become an actual Nice Person, or will old habits refuse to die?……………

Based on an idea from the Coen Brothers, Terry Zwigoff’s very black comedy is essentially a one-joke movie, but what a joke! Bad Santa presents a Santa who is a thief, drinks heavily, screws everything with a skirt in sight and doesn’t even try to conceal his contempt for kids.  Filled with wonderfully non-PC laughs [it even mocks midgets] and containing some of the most hilariously crude lines in ages  ]“yeah baby, you’re not gonna shit right for a week” Willie says halfway through anal intercourse], it is certainly not for children, with the foul language liberally sprinkled with the ‘F’ word, and yet it does have a heart, being in many ways a tale of redemption in the age old manner.  Billy Bob Thornton is fantastic as the often horrid [he even wrecks a kid’s advent calendar!] anti-hero, making you rather like him even when he’s at his most hateful, but some of my favourite scenes are between John Ritter as the mall manager and Bernie Mac as the security chief, the two actors bouncing off each other wonderfully and making the most innocuous of lines seem funny.   Matters do become very predictable, with a bit of sentimentality taking the edge of things too much for some,  but I like Bad Santa the way it is [though there is a shorter Director’s Cut that emphasises the darkness more ], a Christmas movie that is the best of both worlds, gleefully ‘sticking it’ to many Christmas institutions while still, at its centre, being quite a heart warming tale in the traditional way.  Just don’t show it to your grandmother.

Actor Billy Bob Thornton took to his official blog to describe just what we can expect from his new survival horror, Red Machine. The film is about a group of men being relentlessly […]

The irreverent, funny, violent and action-packed The Baytown Outlaws has a full UK trailer and we are very pleased to share it with our readers! The film follows the Oodies, a trio of redneck hillbilly […]

PARKLAND is the heart-stopping and powerful true story, never before told, of the people behind the scenes of one of the most scrutinised moments in history. Written and directed by Peter Landesman, PARKLAND recounts the […]