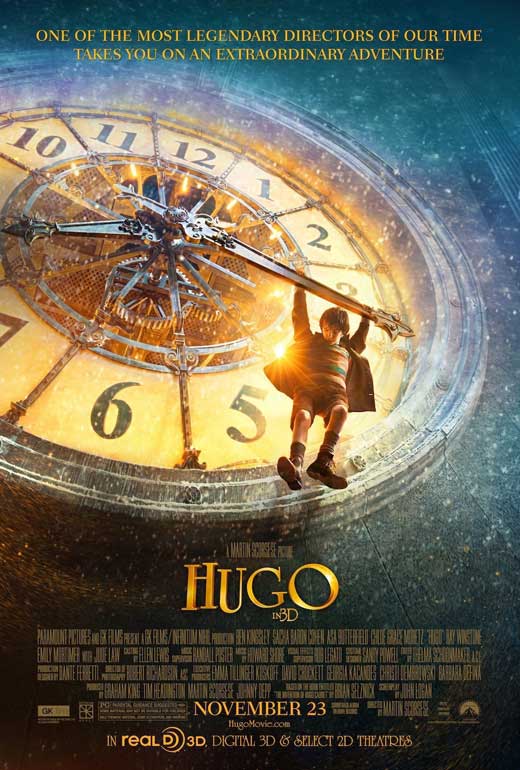 Hugo Cabret is a young boy living with his father, a master clockmaker who took him to see all sorts of films, in a Paris railway station in the early 1930s.  When Hugo’s father dies in a museum fire, Hugo is taken away by his uncle, an alcoholic watchmaker who is responsible for maintaining the clocks in the railway station. His uncle teaches him to take care of the clocks and disappears. Hugo lives between the walls of the train station, maintaining the clocks, stealing food and working on his father’s most ambitious project: a broken automatum.  The grumpy old owner of the toy store catches him stealing and takes away Hugo’s blueprints for the automaton.  Hugo enlists the man’s goddaughter Isabelle to help him retrieve the manual and find the robot’s missing key, while introducing her to the world of the movies………..

Hugo is a gift from Martin Scorsese to true film lovers.  I don’t mean folks who just like to go to the pictures once a week and see the latest release, or folks who have amassed a huge DVD collection, etc.  No, I mean people who are totally in love with the cinema and care deeply about it, as an art form, as a source of wonderful entertainment and as the greatest escape from the trials and tribulations of the real world there can be.  Much has been made about Hugo being a kid’s movie that will bore most kids.  I suppose that’s partially true, considering how children today are force fed a diet of lightning paced entertainment filled with fart gags.  That’s not to say there’s anything wrong with that sort of movie, but that’s almost all there is these days, with little room for the slower, more thoughtful kind of children’s movie that used to fill cinemas decades ago.  I do think that intelligent kids will at least find Hugo interesting, and perhaps it’s the type of movie that kids should maybe see with their parents rather than their mates.  Sadly, in part due to a dreadful trailer, Hugo looks like it is flopping big time at the box office.  Thats a real shame, because I think it’s the finest film of the year.

Right from the very beginning, Hugo is pure magic, with the camera taking us, in stunning 3D and without a cut [or at least it seems like there are no cuts] from an aerial view of Paris to the inside of the station clock tower.  You notice I said the words “stunning” and “3D”, in the same sentence, me, who is constantly moaning about the pointlessness of the process in his reviews on this very website.  Well, the sequence is stunning, swooping around the station in an exhilarating manner, with the people not looking like cardboard cut outs for once.  I don’t think that they employed a different kind of 3D to anyone else though, the scene just somehow works.  There is less showing off after this bit, but Marty constantly finds ways to shoot things from different angles and emphasise depth and perspective, really using 3D better than any other filmmaker.  I would say at least half the shots in this movie are interesting in some way, and virtually every cinematic technique seems to be used to help give Hugo the feel of a dream, yet it’s never ‘in your face’ and often it’s the simplest things that stand out.  In one scene, Hugo is on the railway track, oblivious to the train hurtling towards him.  Finally Hugo turns, and to register his fear, we have quick three static shots of the front of the train, each one closer to the screen.  You may say that Scorsese has made better films, but in my opinion none that better shows his mastery of movie making.

The story is utterly beguiling; I suppose you could call the pace at which it is told slow, but I didn’t find it that way.  It’s just the right pace for the tale, and actually to me it moved reasonably fast, but that’s maybe because I was so caught up in it!  A sense that this is going to be a typical story about a boy who has to fend for himself in a tough world goes away almost immediately, with, instead of Dickensian grit and darkness, the station being shot in bright, vibrant colours and it all looking quite clean and pleasant, even the grimy parts!  Totally unrealistic, but very pleasing and even appropriate, because, after all, this is a kind of fairy tale.  For a while, the movie progresses as a kind of mystery, with Hugo and Isabelle making a terrific team.  She is thrilled to be going on an adventure for the first time in her previously boring life, while Hugo doesn’t see much of a big deal about the things they are getting up to, and then Hugo takes her to the see a movie for the first time.  One shot of her face, in total awe, shows the wonder of cinema better than in almost every other film, and helps link Hugo, in a way, to Cinema Paradiso, that other wonderful movie that is in love with the act of seeing movies, though of course without the tragic love story! 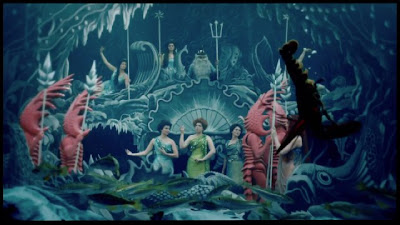 There is romance in Hugo though, with two subplots of the ‘will they, won’t they’ kind taking place in the station, and they are very touching without being cloying. One scene, of the Station Inspector completely at a loss with what to say or do when visiting the object of his affections, flower seller Lisette, manages to be very sweet, very funny, and a little painful in the way that most of us can relate to!  The  Inspector is played by Sacha Baron Cohen, so he’s a mostly comic character, but like many of the great comic characters, has a certain sadness to him.  Some have said that the slapstick sequences that usually involve him chasing Hugo all over the place are out of place; I feel they are perfectly placed light interludes.  Way back when he played a certain person called Ali G, I was convinced he was a comic genius and I still think that.  Watching him in Hugo, he would be absolutely perfect for the role of Inspector Clouseau if they ever decide to make another one.  Of course most of Hugo is from Hugo’s point of view, even giving us a terrifying feel of what it might be like for a child to be trampled on, and so it’s right that certain things appear a little exaggurated, or slowed down [there’s a wonderful bit where loose notes blow slowly and magically around a room].

Of course Hugo really takes flight once we know who the toy shop owner is, the magician-turned-filmmaker George Melies, who stunned audiences of the early 20th century audiences with fantastical visions and special effects.  The movie has constantly been about people who are in some way incomplete and need to find meaning to their lives, but now it becomes not only about someone getting their life back, but also becomes a love letter to not so much cinema but the history of cinema. Scorsese whets our appetite with a two minute montage of well known faces and scenes from silent movies, then shows us a glorified flashback to the making of one of George Melies’ films, and for ten minutes or so this critic was in Heaven.  What true film fanatic wouldn’t want to travel back in time to the set of one of the earliest films?  Scorsese allows us, for a few priceless moments, to do this. We see a dragon operated by wires, cast members battling other cast members who are suppose to be skeletons, sea goddesses, and other amazing sights, all in a glass set.  After this, we have a rather conventional climactic chase and a vertiginous climax, and some may say that the film doesn’t need these, but Scorsese is trying to entertain after all as well, and the true climax of the movie is afterwards anyway, where the story resolves itself in the only way it can and we are present at an event which probably happened.

Criticisms of all this being too ‘educational’ seem ridiculous to me, though it’s typical of the world we live in now, where ‘learning’ is of less and less interest.  What’s wrong with teaching viewers, especially young ones, about the pioneers of the cinema?  Hugo gently attacks the ignorance many people [people who in my opinion are not true film fans] have about old movies, fools who won’t watch them because they consider them ‘boring’, and even if everything else about it were rubbish, I would love it for doing that alone!  Fortunately, almost everything about Hugo is brilliant, from the amazing performance of Asa Butterfield as our young hero, who is able to express so much with a glance, to the almost omnipresent score by Howard Shore, who shows a pleasing light touch and which constantly adds its own commentary on events.  In the end though, this is Scorsese’s film, and it may not contain a single swear word, or scene of violence, but might be the most personal movie he has ever made, it’s major themes of film preservation and never forgetting film’s past being ones that are obviously close to his heart, and ones that should be close to the heart of everyone who has become obsessed by the greatest art form of the 20th century.  Truly heart warming in the best possible way, it’s a masterpiece and Scorsese’s best movie for a very very long time.

Echoing films by Martin Scorsese like Goodfellas, Mean Streets and Casino, Revenge of the Green Dragons is a new crime drama from directors Andrew Lau (Infernal Affairs) and Andrew Loo. A24 films have just released […]

Some new images from Martin Scorsese’s intriguing bank crime film, The Wolf of Wall Street, have been released. Check them out below. Based on ex-stockbroker Jordan Belfort’s memoirs, DiCaprio take on the role of Belfort, and […]