Antarctica, 1982. Three Norwegian scientists are in a snow cat are following a signal when a crack in the snow causes the vehicle to fall into a fissure in the ice and gets wedged. The lights from the snow cat reveal a spaceship.   Palaeontologist Kate Lloyd is asked to go to Antarctica to assist, and travels with her colleague Adam Finch to the remote Norwegian camp.  There, she is shown an organism frozen in ice.  Against her wishes, a tissue sample is taken and, while the group is partying, reveals it is from an alien.  The ice thaws out and the camp’s dog is agitated and wants to get out of his cage.  Two of the team visit the ice block and just about see something escaping.  The dog kennel is discovered to have no dog, just some fur and lots of blood.  A terrifying monster is around, one that can replicate human beings….. 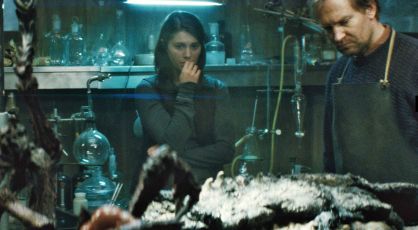 Another day, another dollar, and another bleeding remake of a film that is loved by many.  I personally consider the 1982 the Thing, which seems to be now called John Carpenter’s The Thing nowadays, an almost flawless movie and one of the greatest science fiction/horror films ever made.  I would imagine most folks reading this review will have seen that movie, but if you haven’t I really urge to check it out!  Now there has been some pretty lousy remakes of late, with Conan The Barbarian and Straw Dogs being the first two that come to mind, and those that haven’t been lousy have mostly been pointless.  I would put The Thing in the second category.  It’s not that poor a film, it’s just extremely uninspired and a pale shadow of its predecessor.  It claims to be a prequel of the ’82 film, but comes across as just another remake, and did we really need the story of the Norwegians that were there before Macready and his team visited the camp?  No we didn’t, the whole movie is a story that does not need to be told.  So the film needs to be judged more as a remake, and on that level it fails miserably.  I am possibly guilty, in my reviews, of sometimes comparing a remake to its original too much and not judging it as its own entity.  Unfortunately, The Thing  tries to be so similar to John Carpenter’s matchless masterpiece, that I think one can’t help but compare it.  As much as entertaining [or should I say trying to entertain] a modern audience wanting some jump scares, gore and the like, it also seems to try to please fans of the original, but does it in a half hearted way.

Certainly it begins well.  Carpenter’s style is reasonably well approximated, with the cutting nice and leisurely and the camerawork slowly panning over the camp, or across empty corridors, though there’s no real feeling of dread, and this isn’t good!  Anyway, we soon have the discovery of the ship, which is nicely handled, and then Kate’s joining the team.  Sadly, except for Kate, none of the characters really register very much.  Bill Lancaster’s brilliant script for Carpenter’s movie concisely let us know the personalities of everyone with just a few lines, or the way they act and do things.  Eric Heisserer’s pretty poor script for this effort gives most of the characters far more dialogue, but the characters remain uninteresting and just don’t really register much all.  Still, the relatively slow but steady pace of the original [though of course the ’82 film is itself a remake, albeit of a more different film The Thing From Another World from 1951 so maybe I shouldn’t refer to it as ‘the original’!] is replicated here, and though the film fails to build much suspense, I, for one, couldn’t help but get a bit excited, because they have made giant strides in special effects since the ‘80s and CG is wonderful because it can do everything.  Actually I’m being sarcastic there, but nonetheless, I reckon many people would get pretty thrilled at the idea of a CGI team let loose on the concept of The Thing.  Just think of the great visuals they could come up with, just think of the invention!

Actually, we end up being given neither of those two things.  The effects seem content to merely provide variations of effects of the ’82 film.  Stomachs opening up.  Bodies sprouting legs. Tentacles coming out.  Big deal. Consider how ground breaking the original’s effects were, and you’ll probably agree that they missed a major opportunity with this film.  I know they wanted some consistency, but just think of the possibilities!  Frankly, they botched it, and even worse so because the CG is often really poor.  It’s mostly okay in the first half, and it’s nice to see a little bit more of what the Thing is like in its original form, but the CG gets worse and worse, and when we start to have a creature that consists of two people joined together [which makes little sense, o hang on! It’s because we briefly see one in the original] with spider legs rampaging around, I couldn’t help but think of the Scorpion King at the climax of The Mummy Returns. Think about it.  The idea of two men joined together as one walking about on spider legs is both blackly funny and pretty horrific, but here it’s not horrific and only funny because it looks so bad.  Watching this movie, I had even more admiration for what Rob Bottin and his amazing crew did back in ’82 with things like latex, strawberry jam, mayonnaise and gelatin.  What really winds me up is that a while back I read an interview about this movie and how they were going mostly for the practical approach.  What crap!!

Of course there are non-CG effects and they mostly work well, but it seems to me that the skill of creating special effects that are not computerised is a dying skill, and I find it incredibly sad.  Still, The Thing is reasonable if taken on its own.  It’s not especially good, but not crap either. The final third ramps up the pace in a way Carpenter’s movie did not do, it didn’t need to, but it’s something that works quite well for this version, and there is a terrific scene towards the end taking place inside the Thing’s spaceship.  By that time, I was hardly on the edge of my seat, but I was acutely aware how important sound can be to a film, because the variety of quite subtle noises in that specific scene is very skilfully employed and I imagine would work wonders with somebody who is really ‘into’ the film.  Sadly, this critic wasn’t.  The film wastes time paying homage to the original but just doesn’t develop enough of a distinct personality all its own.  Considering that it has no real reason to exist, you would think that it may go for broke and attempt some explanation of things that the ’82 flick refused to answer.  Sadly, except for mechanically setting up a few unimportant things – o look, that’s how the axe got there – it doesn’t bother.  We are still none the wiser about the alien, where it is from, what it wants, etc.  The sheer laziness of the scripting, considering this has been a project for years in varying forms, is astounding.  Of course great scenes from the original are copied, with for example a variation of the blood testing scene, but never as well.

The cast all do okay.  Mary Elizabeth Winstead does pretty good as the obligatory tough heroine who exhibits Ripley characteristics when need to, but is symptomatic of this movie’s falling back into the hoariest of cliches when it decides to briefly stop being a copy of the original.  This is director Matthijs van Heijningen’s first feature film, and he reasonably emulates Carpenter’s style while treating the action stuff with the obligatory fast cutting; in short, he shows little style of his own, but faced with such general conceptual idiocy, it’s understandable if he didn’t really try. The score, by the always impressive Marco Beltrami, is often very effective and mixes in the odd sound from the Ennio Morricone/John Carpenter score from Carpenter’s film.  He does it quite subtly, but being a film score fan, those bits stood out for me and made me even more wish I was watching the Carpenter film.  Taken on its own, this The Thing does just about pass muster.  Its dreadful box office performance in the US isn’t entirely justified.   It’s nothing special either though, and as a supposed addition to The Thing mythos, it’s pretty pathetic and pointless.  Seriously, what was the point?

The Thing prequel: We have the official image gallery right here

Care about this so-called prequel or not, you won’t be able to escape the onslaught of media coverage this big budget horror is gonna get And in the tradition of fair play, we will cover […]

We already know that Universal are rebooting all their classic monsters to create a Marvel style universe, and with Dracula: Untold already released, and The Mummy (set in the present day) currently in development and […]

There have been a number of Marvel stories doing the rounds today, so I thought it best to briefly cover them all in one handy post, so let’s get started! Firstly the synopsis for Thor […]