HCF may be one of the newest voices on the web for all things Horror and Cult, and while our aim is to bring you our best opinion of all the new and strange that hits the market, we still can not forget about our old loves, the films that made us want to create the website to spread the word.  So, now and again our official critics at the HCF headquarters have an urge to throw aside their new required copies of the week and dust down their old collection and bring them to the fore….our aim, to make sure that you may have not missed the films that should be stood proud in your collection.  With Mission: Impossible-Ghost Protocol currently bringing in the crowds, Dr Lenera, in the second of two Rewinds this week and postponed from last week, decided to take another look at director Brad Bird’s first feature movie, a really touching and imaginative animated science fiction film that hasn’t found the audience it deserves. 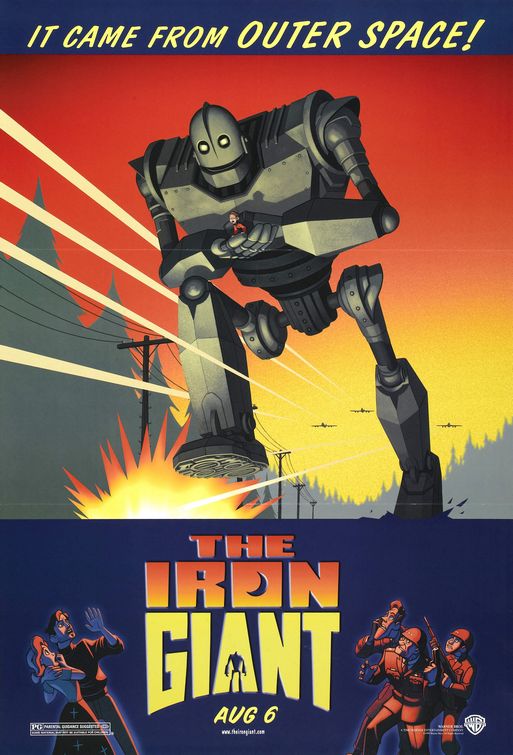 In 1957, a large robot crash-lands just off the coast of Rockwell, Maine.  Hogarth Hughes, a young boy who lives with his mother Annie, follows a trail of destruction in a nearby forest and finds the robot stuck in the electrified wires of a power station that it was trying to eat.  Freeing it and realising the robot is friendly, Hogarth beings to form a friendship with the mysterious machine.  He tries to instruct it how to repair a damaged railroad track, but a train collides with the robot’s head and Hogarth and the robot flee before the train crew can investigate.  The damaged robot repairs himself and Hogarth hides it in a barn.  However, US government agent Kent Mansley is on the robot’s trail and arrives in Rockwell……

The Iron Giant is one of those films that almost everyone praises when they see it, but not enough people have seen it.  You would think that the tale of a boy who befriends a giant robot would be an enduring favourite with kids, but it seems that The Iron Giant is viewed more by adults, which is a bit of a shame.  It’s full of mature themes, but its story is simple and direct enough that I wager any young boy would adore the film.  It’s based on the book The Iron Man by Ted Hughes, which had already inspired an album by Pete Townshend in 1989 and consequently a stage show.  The studio making the film Warner Bros had just had a flop with Quest For Camelot so were in no mood to provide much money for another animated film, but the trade-off for the lack of production time and low budget on The Iron Giant was that they were left alone with little studio interference. Tim McCanlies’s script significantly altered the book, making it less fantastical [such as not having the robot fight a dragon out to destroy Earth] and adding some more characters, though the tone and themes were still there and Hughes himself approved the script.  Sadly Warners, because they cared little for the film, rushed it out with little publicity and consequently it flopped, despite generally very good reviews.

One of McCanlies’s greatest alterations was to set the story in 1957 during the Cold War, when America was living in fear from a possible attack by the Russians, while at the same time UFO sightings were huge and science fiction films were being churned out consequently, often incorporating the country’s fear of a possible invasion.  The Iron Giant opens with a scene in a diner which encapsulates time and place, and the fear of that time and place, so economically that it should be studied by all budding scriptwriters as an example of how to best do exposition.  The actual story gets underway very quickly, and you’ll recognise many similarities to E.T. The Extra Terrestrial, another tale of a boy who makes friends with a creature from space which is hunted by the military.  I personally am one of those strange people who have never really enjoyed Steven Spielberg’s film, so I consider The Iron Giant to be far superior;  more intelligent, more subtle and a lot less sickly.  A good example of its cleverness is the way the Giant is in many ways a compendium of Hogarth’s interests and anxieties, as if he had dreamed him up.

There’s a suspenseful build up to the reveal of this metal being who eats anything metal, but of course this giant is far from evil, and becomes a great friend to Hogarth.  These scenes take up much of the film, but never fear, they are perfectly judged, being very touching without getting into schmaltz.  Although there’s one out-of-place bit near the beginning where a ferret comes out of somebody’s trousers and causes havoc in a diner [perhaps it was felt it was needed to enable children to get ‘into’ the film], there’s hardly any of the slapstick that almost every American animated movie feels obliged to put in [I love it as much as the next person, but why does every cartoon feature have to include it?].  When Hogarth bumps into a tree, the initial feeling is that it’s funny because that is what we expect it to be, but when we see blood on his face we have to suddenly change our thoughts.  Of course there are laughs, especially when Hogarth is hiding the Giant from his mother and his detachable hand is unable to stop moving around, in a bit that was copied in the first Transformers movie.

Though not an action movie, we do eventually get lots of action involving the military, with plenty of cool stuff like the Giant revealing weapons we didn’t think he had and destroying lots of tanks.  The Godzilla fan in me yearns a little for a bit more of this, but that would have the ruined the film’s pacifist message; just notice the number of times guns are shown in a very bad light, for example, but the film also avoids demonising the military too.  Of course the main message is “you are who you choose to be”, which if you think about it is rather different from the “be yourself” message that exists in most Disney films and possibly more valuable.  The film is full of important lessons for children, but never feels like it is lecturing.  It isn’t afraid though to tug at the heartstrings towards the end, and by then it has certainly earned it. It also isn’t afraid to leave much unexplained, especially concerning the Giant.  By the end, we haven’t really learnt that much, and that’s fine, because we can fill in the rest with our minds.

I’m not really a fan of the drawing in Warner’s animation style of this period, but the animation is nice and fluid and the Giant, who was actually computer animated [though it blends so well with the hand drawn rest of the film that you hardly notice], really comes across as a believable character through the way he moves.  For some reason he seems to have very emotive eyes; that statement sounds absurd, but I mean it!  Vin Diesel voices the Giant and it’s probably the best performance he has ever given.  Fine voice work overall [with Jennifer Aniston actually sounding not like Jennifer Aniston at all for most of the time] and lots of nice touches for animation, science fiction and comic book buffs, from animated versions of Frank Thomas and Ollie Johnson who worked on many of the classic Disney movies, to a so-brief-you-may-miss-it appearance by Sputnik, are the icing on the cake in this terrific movie.  An unnecessary final scene, in a film that had just perfectly ended, and the odd inaccuracy [did they really have 50s science fiction movies on TV during the 50s?] don’t succeed in ruining a nearly perfectly judged film.

So far everything I have seen for Brad Bird’s fourth instalment of the Mission Impossible series has been nothing short of breathtaking, and today we discovered a brand new clip which only adds to the […]

Do you wanna go to ‘Tomorrowland’? This trailer will ensure you do!

Director Brad Bird is working on an ultra secret new film, with Lost and Prometheus writer Damon Lindelof, and Jeff Jenson, and the Internet has been having a bit of a meltdown trying to find […]