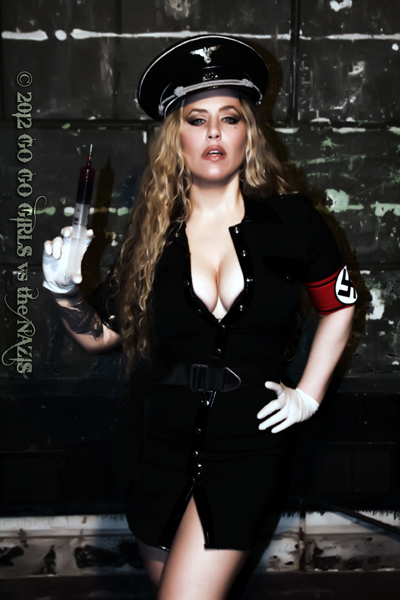 Scream Queen Melantha Blackthorne (SINNERS AND SAINTS, DEATH RACE 2000) pays tribute to ILSA SHE WOLF OF THE SS as the evil Nazi Doctor in Wayne
Clingman’s GO GO GIRLS VS THE NAZIS!

Melantha Blackthorne is Wayne Clingman’s dark muse for GO GO GIRLS VS THE NAZIS, which is due to start filming later this year.

Long known for his mad crushes on Lindsay Lohan and Erica Rhodes, Wayne has admitted that scream queen Melantha Blackthorne is his muse for this upcoming Russ Meyer tribute film.

“In the past I just followed her career in indy horror, but now working with Ms. Blackthorne on GO GO GIRLS VS THE NAZIS has brought a new understanding on how great and creative she is on both sides of the camera. In fact, to me Melantha is the new face of exploitation film.”

Yes, only time will tell if Lindsay will get over the end of Wayne’s crush but one thing is sure, exploitation film will never be the same.

For more info on GO GO GIRLS VS THE NAZIS visit www.gogogirlsvsthenazis.com

Check out some more badass pics of Melantha as evil Nazi, Doctor Headle, below. On September 6, 2012, the first teaser from the production of Go Go Girls vs. The Nazis was released to the world. Filmed in Milwaukee, WI and at Dr. Heidi’s Lab at an undisclosed location, […]

Salon Kitty is directed by Tinto Brass (Caligula) so expect lots of nudity. Set in Germany at the start of World War II, Salon Kitty is about a whore house, run by Madame Kitty, an […]

MAD Z Productions has announced it will begin production on its newest horror feature, Sisters, in August. The project brings together for the first time ever four of indie horror’s biggest stars: Jessica Cameron (Truth […]