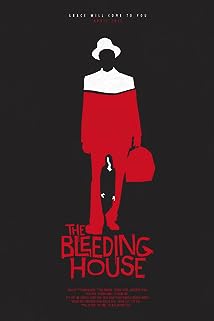 A stranger with mysterious intentions comes to stay the night at a secluded country home, but what he finds inside is a family torn apart by a violent past and a secret more deadly than he expected.

An ever so slow Funny Games….

Its quite hard not to like The Bleeding House.  It may sound like its set in a Cockney land full of Mary Poppins type characters singing Chim Chim Cher-ee, when its in fact a slow burn horror that relies more on talk and set up than it does on gore soaked torture porn.  In some ways that is probably a good thing due to the way the genre is at the moment, with found footage and the need to shock filing each new horror film, The Bleeding House marks a refreshing change to those who want something different, even though it may test those who want a bit of bite to proceedings.

What I liked about the whole film is the small  low budget vibe you get from the whole thing, its like a stage play brought to the small screen, where instead of a man with a knife bringing terror to the viewer’s hearts, its the claustrophobic grip that tightens around your neck and refuses to let go until its finished with you.  You may be reading this and thinking that this is heading for a five star treatment here, but while I admire its roots and what it tries to bring to the horror fan, ultimately, its a hard slog getting to the end of the whole thing and with a running time of a mere 87 minutes, it does feel a lot longer.

“Secrets!” can play havoc in every family and in life and the whole premise of The Bleeding House is that simple term,  In a back road outside a Midwestern town, the Smith family live in isolated home where their relationship is fraught with past mistakes.  The father Matt (Richard Bekins) is miserable of how his life has turned out while his wife Marilyn (Betsy Aidem) is sick of living far from everyone and everything,  His kids do not fare better either,  Gloria (Alexandra Chando) wants to be called Blackbird who loves to cover her bedroom walls full of dead insects while the son Quentin (Charlie Hewson) dreams of being away from the entire family and set up a new life with his girlfriend, away from the misery that the Smith family bring.

Its a whole set up that stinks of a horrible family life for all those involved,  Past mistakes and too many memories have wrecked the family beyond all hope, what they need is a bit of cleansing and one night when a knock at the door brings a man all in a white suite called Nick (Patrick Breen) a guy who needs somewhere to spend the night, clutching onto a bag.  The father lets him in, but what is in the bag? and why is this film called The Bleeding House?  Yes fans…the cleansing has began……

Low key horror is what you can simply call the film.  It never rises above the one notch it starts with and is very heavy with its dialogue.  Its always great here at HCF to watch a horror film try and take an old premise and offer something different and while it works at times, the payoff doesn’t quite match the expectation.  That is not a real bad criticism off me, its just with slow burns, you do expect the film to gradually rise to a tension soaking pay off, sadly Bleeding House doesn’t quite achieve that.  Its whole tone will either be appreciated or hated by you lot out there.

With enough clues scattered throughout, it may be easy to guess what kind of secrets the Smith family and what this strange visitor to the house have, but its a journey that I appreciated thanks to good acting, especially from Breen and the impressive Chando and despite some stupid character decisions later on that threaten to bring a dash of silliness, you can see why this film is gaining a massive following because while it may reach out for an acquired taste, those who find the love will discover The Bleeding House as yet another much wanted indie horror cult classic…..