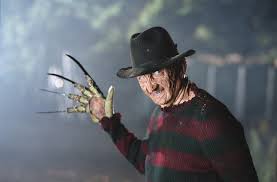 The Producer Brad Fuller has been talking about the upcoming situation regarding films that are either being made or what is happening to them, and when it includes the likes of Freddy Krueger…. you sit up and take notice!
Here is the complete rundown of what he said!
The Purge 2: The sequel to ‘The Purge’ delivers on the promise of the original in that we’re not staying in the house. It’s not a home invasion movie. You’re out in the streets and a group of people who get stuck in the middle of it and have to get from point A to point B.”
Friday the 13th: It’s a matter of getting a script that we all love. [Found footage style is] something that we’re looking at, but I can’t tell you definitively that that’s what the movie is… I don’t know [if Derek Mears will return to play Jason], because I don’t know which Jason we’re going to have.”
Ouija: Today is day 17 out of 25 [of production]. We’re shooting it here in Los Angeles. That is a fairly low-budgeted movie. It’s the story about a group of kids who take out a Ouija board and start playing a game, and all hell breaks loose… In our movie, the Ouija board is a communication device. Our kids tap into something horrible and the Ouija board is the way that the entity comes in and is going to have to go out.”
A Nightmare on Elm Street 2: I haven’t heard a thing. It’s a little bit disappointing. We were very proud of [the reboot]. In terms of pure box office, I think that’s our highest grossing film worldwide. I’d love to do another one. That’s up to New Line and if they want to do it, they will. New Line had such a huge hit with ‘The Conjuring’ and it feels like New Line might be moving away from the kind of horror with a lot of blood [and] more towards what ‘The Conjuring’ was. At least that’s what I’ve heard”
We can take or leave the Purge details and we already knew of the the shocking plans about a Friday without its Jason.  But the shocking news is of Freddy Krueger where there seems to be no plans at all to bring the icon back.  The remake may have been a box office success but it was meant by critical mauling from fans and we probably have to see what happens with the Friday 13th upcoming film.  Its like a vicious circle….if Friday flops then that will be it….. but if somehow it makes a shed full of money, then expect Freddy to be pushed back into the limelight and if that then proves a success, no doubt we also see the return of Michael Myers……
Its all in the hands of a Friday film that may not star Jason!!!!!
About Ross Hughes 1931 Articles
Since my mother sat me down at the age of five years of age and watched a little called Halloween, I have been hooked on horror. There is no other genre that gets me excited and takes me to the edge of entertainment. I watch everything from old, new, to cheap and blockbusters, but I promise all my readers that I will always give an honest opinion, and I hope whoever reads this review section, will find a film that they too can love as much as I do! Have fun reading, and please DO HAVE NIGHTMARES!!!!!!

James DeMonaco returns to direct ‘The Purge 2’, is it already due to begin filming?

James DeMonaco directed the first The Purge, and using Jason Blum and his Blumhouse production company, the film was made on a budget of just $3 million. Even though it had a mixed […]