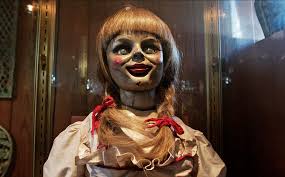 While The Conjuring divided the office here at HCF,  there is no denying that the most interesting sub plot of the film was that freaky doll shit called Annabelle.

Matt released news last year that a spin off tale involving that doll has been greenlit and now news comes of the cast that will star in what insiders are calling a “prequel” to the events of what happened in The Conjuring.

John Leonetti, who was the cinematographer on “The Conjuring,” will direct from a script by Gary Dauberman.

Also a sequel to The Conjuring is also in the works…..

More on this when it happens……

‘CONJURING 2’ SPIN-OFF ‘THE NUN’ GETS ITS RELEASE DATE

They’re basically creating a Conjuring Cinematic Universe aren’t they? We’ve had The Conjuring and The Conjuring 2, and in-between those two films we had Annabelle, which despite being a bit of a disappoointment to many […]

JAMES WAN SAYS THAT THE CONJURING UNIVERSE WAS PLANNED RIGHT FROM THE START!

It’s easy to get a bit tired of all this shared universe stuff, especially in the case of the Conjuring cinematic universe where it seems that things weren’t originally planned that way….though actually they were. […]

Discover the secret of what she wants when Annabelle arrives onto Blu-ray™, DVD and Digital HD on February 23rd and EST on February 9th from Warner Bros. Home Entertainment. Reuniting the filmmakers behind 2013’s hugely […]