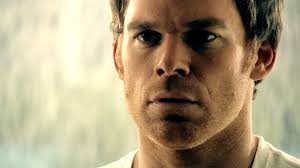 Lets make things clear here!
A spin off show should be set in the same universe as its “PARENTS” but set off on its own little path.  We wouldn’t have FRASIER all those years ago starting his new show only for every fan seeing the first episode of him sitting on a bar chair in CHEERS!
Also would we have an all new BREAKING BAD show starring Walter White called Walter??????   Noooooo….. why? because its stupid!
DEXTER was well on his way to becoming the greatest TV Show ever put on the screen until we reached Seasobn 6 where a rapid decline started and never stoppped and we ended up with a laughable finale which still hurts to this day.
Now totally ruining any lasting memory we have left of Mr Morgan, there is talk today of a spin off, starring the lead character himself!  So I put this in blunt terms……..” HOW THE XXXX IS IT A SPIN OFF THEN????????????????????”
Here is what SHOWTIME PRESIDENT DAVID NEVINS had to say…..
““It’s something we continue to talk about. If we were to do it, we would have to have a very good reason to do it. It would have to feel like it’s a new show. I’m not interested in doing it if it’s just a continuation… There have been some light, ongoing conversations. It hasn’t really gone anywhere yet. It would have to involve Michael [C. Hall].  I think if we were to do
it, I would only do it if it is with Michael.”

We still in the first month of 2014 and already I doubt if I write a more stupid news story this year.

Ross Hughes
About Ross Hughes 1931 Articles
Since my mother sat me down at the age of five years of age and watched a little called Halloween, I have been hooked on horror. There is no other genre that gets me excited and takes me to the edge of entertainment. I watch everything from old, new, to cheap and blockbusters, but I promise all my readers that I will always give an honest opinion, and I hope whoever reads this review section, will find a film that they too can love as much as I do! Have fun reading, and please DO HAVE NIGHTMARES!!!!!!

[youtube]https://www.youtube.com/watch?v=PVApgr1Mqto[/youtube] Ok I am the first to admit that it does not offer much to the fan and it can be accused of just being a clip show showing past glories, but its the end […]