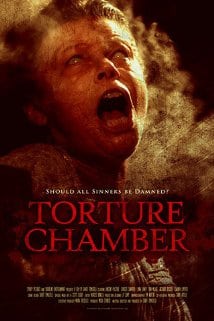 Like 13 year old Jimmy (Carmen LoPorto), cult director Dante Tomaselli has some seriously dedicated followers. Thankfully, unlike Jimmy, Tomaselli’s followers are not out to torture and kill people, and instead are fascinated with the directors work. Torture Chamber, his first film since 2006’s Satan’s Playground, is my first experience with his skills, and indeed on the strengths of this passionate, totally original film, I am keen to see more.

While certainly not to everyone’s tastes, Torture Chamber serves as a reminder of the days of the great Giallo genre, especially Dario Argento’s classic Suspiria, where complicated plots are overwhelmed by an onslaught of style, sounds and nightmarish visuals. Here Tomaselli directs, writes, produces and also creates most of the creepy music used to test your nerves and batter your senses, and the makers have opted for classic practical effects to deliver a modern horror classic, feet firmly in an old school kinda feel. This is a horror film made for lovers of the genre who are willing to give back to the film in order to get something more from it. Give Torture Chamber your undivided attention, and you will be fascinated, but more importantly, you will be very scared in places! Opening with a visual onslaught of fire and menacing music, Torture Chamber’s bombardment of sensory and hallucinogenic horror bites within seconds, and continues to smash your senses like it was a sledgehammer. Remember the feeling of exhaustion that came after watching Argento’s masterpiece Suspiria? Well Torture Chamber will leave you feeling equally flattened, like the director has tied you to a chair and performed some endurance test of your senses to see just how strong a horror fan you are, and how much you can actually take. The film is a test, a Tomaselli test, and if you make it to the end, you will probably be singing its praises too.

The film follows the violent outbursts of a young 13 year old boy name Jimmy, and in the first ten minutes we witness his God fearing Mother and older Priest brother performing an exorcism on the caged Jimmy, and things get bad pretty quickly. The ground shakes, walls crack, rumbles of hellish noise and a general feeling of WTF ensue, and the Tomaselli un-initiated are suddenly well and truly inside his world, and even more frightening, inside his head! It is a scary place indeed, but a powerful one. Within the first fifteen minutes, as things appear to be calming down (ish), the film delivers one of the finest jump scares in recent memory, and just like that Tomaselli has you in the palm of his hand. The realisation that you are in the presence of a director who knows EXACTLY what he is doing is undeniable, and come the films end, unforgettable. We soon learn that Jimmy has become very violent, and gathered up other youngsters who follow his every command, and punish those who they feel deserve it. An underground lair of spooky tunnels is where the kids take their victims, imprisoning them to await their fate. Victims are tortured to death in fine style, and the practical effects work wonders to promote the often gruesome violence. The film’s title couldn’t be more perfect as victims are hooked up to torture devices in Jimmy’s chamber of the macabre, and Tomaselli’s stealth-like camera is there to capture every brutal second. If the film wasn’t unsettling enough, Jimmy dons one of the creepiest masks I have ever seen, and if you are looking for something to appear in your nightmares, then this mask is definitely it!

The films narrative and structure may not be all that clear, and very well may not become clear until the end for some viewers, but the sense of confusion and hysterical madness only add to the impact. Torture Chamber at times feels like a bad acid trip, and full on descent into madness, and with Tomaselli at the helm, it makes that feeling of panic all the more real. Visually and musically the film is stunning, and sounds work wonders to create a sense of dread. The clever camera work is astonishing, with Tomaselli getting into some almost impossible angles, and forever stalking his cast of characters. Watching as the camera swoops through the underground passages, full of dark walkways and sudden bursts of fluorescent blue and characters in silhouette, is like watching a horrific dream unfold. There is genius at work here, real skill and a genuine dedication to the craft of creating real horror. However, there is a serious case of style over everything else, and Torture Chamber is not without its faults. The acting is pretty awful in places, and the script can suffer either because it is badly acted, or poorly written. Screaming comes as real agony rather than actual fear, and some viewers may find it difficult to see past the performances. However, horror fans are surely used to poor acting, and to find top notch acting in a horror film is often a rare treat, so I guess it can be excused here. Instead, concentrate on the atmosphere that has been created, the nightmarish visuals and the incredible sound design, and you will find out what real nightmares are made of.

Torture Chamber is a deep horror with underlining meanings which will differ with each viewer. You could argue that Tomaselli is having a pop at forced religious upbringings, as witnessed at a family dinner with the Father getting rather uptight with his children. You could also argue that the film is pointing the finger at over protective mothers who smother their kids at any sign of danger. There is also argument that the film is simply showing that a damaged childhood can create a twisted, evil teenager desperate for revenge on the world that turned its back on him. Whatever you think Torture Chamber means, it is a visual and sensual masterpiece of highly original ideas and inventive horror that deserves its place as a cult classic.

Dante Tomaselli’s ‘The Torture Chamber’ finally gets US release date

US horror fans desperate to see Dante Tomaselli’s highly anticipated new horror, The Torture Chamber, can finally mark a date in their diaries. The directors fourth horror film will arrive on DVD courtesy […]

Dante Tomaselli has directed a number of horror films over the years, including Torture Chamber, Satan’s Playground and Horror,  and now the Italian-American director is set to take on his biggest film yet, […]