It’s been only ten weeks since Jack Bauer exploded back into our lives after a four year absence and now once again he has departed us once more.  Flying off to either meet his demise or to take the title of this new series, Live Another Day….

Either way at the moment every single fan of 24 has no idea, especially with FOX refusing to answer questions of its return, so was it the best way too end what is basically a ground breaking show?

Well not really, especially for fans like myself who have stood by the character since the early days of Kim and that Cougar crap…(did they really write that scene?).

After the underwhelming finale of Day 8 which left fans cold, we were promised that Live Another Day would right the wrongs of the past.  That the reason for this “12 day event” is simply to finally give much needed closure to the character of Jack and most importantly to the fans itself.   Even if we never saw Bauer again, we were promised that Day 9 would deliver the end that Day 8 clearly failed to offer.   Somewhere between those words and the critical success of this season, those plans were sadly lost.

LAD simply ended with more frustration for us, which is totally unfair to fans who have invested so much into this show.  Lets make myself clear once and for all.  If FOX in the next few days announce that a DAY 10 is coming, then this season will become one of the best days since President Logan was in office and as ended with a mouth watering cliffhanger that will leave us all on edge until we hear that ticking clock once more.   But if such an announcement never comes and we never see Kiefer in his most iconic role ever again…..what are we left with?  Basically a shoddy end which matches the poor “goodbye” we saw in Day 8.

Lets remind ourselves how we got there though, because apart from the last ten minutes when the much expected time jump came, 24 was brimming with style and confidence. 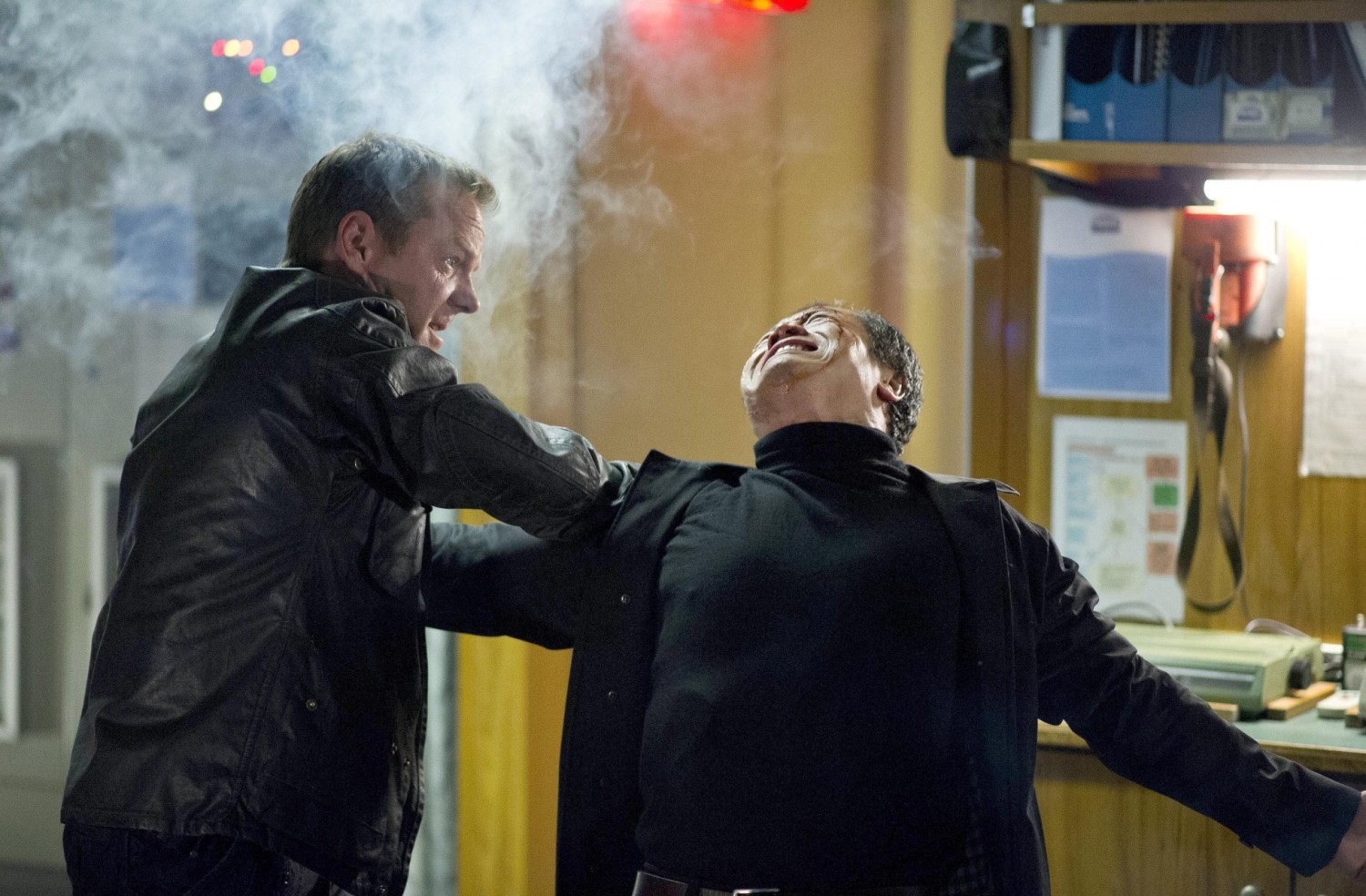 The golden rule if you a woman is “do not fall in love with Jack Bauer” as you will only end up dead.

Poor Audrey joins the list of Teri and Renee as those who have fallen for the charms of the former CTU agent only for them to meet their maker.  Audrey though was more bitter sweet than them all, after surviving torture and left in a deep coma, a few years on and walking and married, Jack somehow has came back into her life and she has paid for it with a sniper bullet right in the gut.   Equally cold is the fact she died with no one she knew around her,   Just looking up to the clear guilty Kate who had failed to do her job.

Also hats off to Kate for delivering the worst ever phone call ever seen in TV History.  I mean your just seen the President’s daughter die in your arms and your first port of call is phone her ex boyfriend who is the middle of a gun fight and trying to save the world.  Nice timing Kate!  But it did bring a master acting class by Kiefer whose pain and torture expression makes a mockery too all those who dismiss 24 as a nonsense show.   That one scene displayed why we love Kiefer and Jack.  No dialogue, just rolling eyes and sheer expression of guilt, we felt you pain Jack…..we felt it hard…..and just for one moment we thought he was actually going to kill himself when he raised that gun towards his face.  Instead though he took it out on the bad guys in what was one of 24’s most brilliant moments.

President Heller though was an emotional scene and a brilliant moment for William Devane.  His collapse on hearing the news his daughter was dead and his final ever speech about how he will never remember this day or his daughter ( which is nothing new as he has totally forgotten about his son Richard) was heartbreaking.  Many say that Heller should have died when that missile struck Wembley, but we never would have had that haunting final scene which was more powerful than any bullet or action piece.

Back to Jack and after a brutal fight with his nemesis Cheng, he went all Game Of Thrones on us and with one final swing, saved the world and ended the long story arc between himself and his foe.

Some gripes.  We have been waiting for this moment between Cheng and Bauer and while it was great to see the evil bastard return a few hours back, his impact was not cleary felt due to the now only 12 hours instead of 24 season run.  By now we should be entering “phase 2” of the story arc, but instead everything seemed kind of rushed.   The writers can’t help themselves at times by delivering twist after twist.  We started this day with Margot as the bad girl…then it turned into Navarro, then Cross before finally settling into Cheng.   That is a lot of bad girls/guys too cram into 12 hours.

But for sheer ride and thrill factor LAD delivered in spades.  Many thought the return of Bauer would not work and after the tired days of 7 and 8, viewers would not warm to the now dated process of how 24 works.   But everyone was wrong.   The four year gap has refreshed the show and seeing Bauer back in action has been a stunning thrill.  There really is no other show on TV at the moment like it and the critical success has given FOX a major problem, fans now want more….so are we going to get it?

Which brings me to the last 10 minutes.

Its touching that Jack gave his life up for his only friend Chloe.  That scene in the car when she tells him that “she is his only friend” is one of the reasons why her character is as important to the show as Jack himself.  His “trade” for her life was typical Jack and even when he faced the Russians after all these years on the run he could not help himself and deliver the words….

“I’ve taken you at your word, but if you’re lying to me, if anything happens to her or my family your entire world will come apart. And you will never see it coming.”

You one cool bastard Jack and I love you……………….(did he pass something to Chloe when he held her hand???)

But as he boarded the helicopter and flew off to Russia, you can not help but feel frustration that this could be the last we see of our hero.   This is not the closure we were promised and with plans originally to see this show end with the death of Jack Bauer, it seems like the fans, the writers are too scared to say goodbye to their creation.

Because of that, what we are left with is another Day 8 fiasco of a “no closure” last scene which means in a good way he could come back, but what if he doesnt?

Are we expected to be happy that Jack either died or is left to rot forever in a Russian cell?

As a fan of 24 and thanks to LAD being sooo good, its now up to FOX to announce that we going to have 24: The Final Day, which gives fans a 24 episode run that will have a clear plan to end the show once and for all, we deserve it…..but most notably….Jack deserves it…..

Until next time Jack….we hope!

Lars Von Trier unleashes his latest doom and gloom epic on UK cinema goers this Friday, and just to get you in the mood, we found six one-sheets for you to have a look at. […]

Yes indeed, though it’s a case of “blink and you’ll miss him” as his Nelson character from the original 1990 version  skulks in the background while Ellen Page’s Courtney talks about what happens when […]

Latest TV: Kiefer admits he is happy that a new 24 is coming…… without him!

FOX may have been surprised that a new announcement of a brand new 24 is coming was met with a muddled response from fans, a sense of disappointment hang over it!  Why?  Because 24: Legacy […]