Set in the small town of Snowhill Utah, this is a cult spaghetti western from 1968 and widely considered to be director Sergio Corbucci’s masterpiece. It has a classic anti-hero in the ‘man with no name’ archetype as mute gunfighter known only as Silence (Jean-Louis Trintignant) arrives in town to avenge a woman who’s husband was murdered by psycho ‘bounty-killer’ Loco (a scenery chewing Klaus Kinski). We discover the impoverished and snow frozen township have turned to stealing food for survival, making them rich pickings for bounty-killers who are permitted by law to capture or kill criminals for a price. 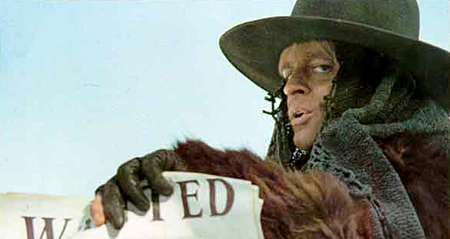 At the same time a sheriff arrives in town with an agenda, to clean and civilize the wild west, his by the book approach and dislike for the brutal way of life make him an enemy of Loco who stands to lose out if laws are changed. Meanwhile we find out that Silence became a mute after witnessing the murder of his parents at the hands of bounty-killers and having his throat cut in order to silence him and has a personal grudge against those who profit from the deaths of others. He has a reputation as being super fast on the draw and his style is to only pull his gun in self defence. 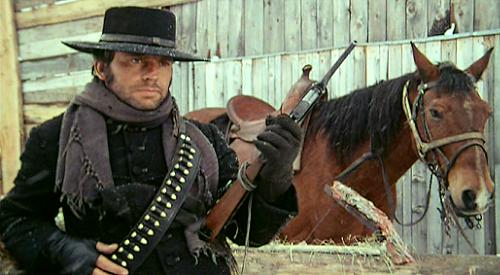 The film is however most famous for its shocking ending. Loco brutally murders the sheriff and sets out to get Silence. Our hero confronts Loco and his gang who have kidnapped local beggars and are holding them hostage in the tavern. Silence approaches but before he can do anything he is shot in the hand, severing his thumb rendering him unable to use his gun. Loco (in one of Kinski’s best moments) stares down our hero before blowing him away. His gang then go on to massacre their hostages, with Loco coldly proclaiming that “they all have a bounty on their heads, we’ll come back for them later”. Apparently this scene was cut from some versions of the film and replaced with a ‘happy’ ending which the director was loathe to shoot. However as harsh as the scene is, it leaves an impression and will definitely stay with you.

Overall one of the best of the spaghetti westerns around and a real forgotten gem.