“Once I buried two Arabs in a wall over there… Facing Mecca, of course.” A Belgian camera crew document Benoit, a charismatic young man as he goes about his day to day business talking philosophy, drinking and most of all killing people, lots of people in probably the funniest black and white film about a serial killer you’ll ever see. This is a Black Comedy with a capital B (and C) and definitely not for those who balk easily at gags involving murdering children.Trust me it sounds terrible and it is, but in a good way.

This film first hit our screens back in 92 and immediately caused an uproar with the Daily Mail types, most of whom had never seen the film and clearly didn’t understand it’s satirical undertones about the casualness of screen violence and of course the lengths to which reality television/documentaion will go (something which makes the film even more relevant now).  As mockumentarys go this is the Spinal Tap of serial killer films. Its side splittingly funny in places, despite the horrors that surround the humour.

Benoit himself as the films subject is a force of nature, one of cinemas most entertaining and complex villains, right up there with Alex DeLarge or Heath Ledgers ‘Joker’. His inane ramblings about red bricks and pigeons and drunken sing-a-longs ying and yang with his increasingly out of control killing sprees. These get to the point where, in the films funniest moment, he hunts down a rival serial killer like himself only to be confronted with a duplicate camera crew following the other guy (Pegg and Co must have nicked this gag for the ‘parallel gang/storyline’ in SOTD). 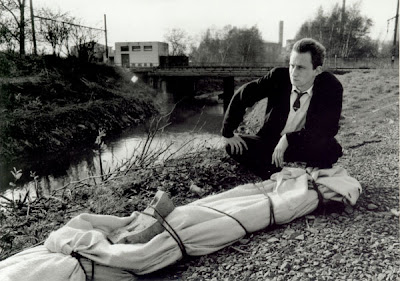 The camera crew, led by the late Remy Belavux (playing himself, they all played themselves in the film) end up getting dragged in to Benoit’s world too, taking active part in the murders and in the films most shocking moment, gang raping a woman before killing her and her partner. These instances are filmed and treated in almost a casual, passive way, as if what they’re filming is nothing out of the ordinary (and tbh it isn’t in this film).

If you have a strong sense of humour then I’d seriously recommend you see this as its one of the most interesting cult Euro flicks to come out of the 90’s and layered with more subtle gags on society and horror film satire than any Scream movie could manage.