HCF may be one of the newest voices on the web for all things Horror and Cult, and while our aim is to bring you our best opinion of all the new and strange that hits the market, we still cannot forget about our old loves, the films that made us want to create the website to spread the word.  So, now and again our official critics at the HCF headquarters have an urge to throw aside their new required copies of the week and dust down their old collection and bring them to the fore…. our aim, to make sure that you may have not missed the films that should be stood proud in your collection.  So here’s the sequel to Before Sunrise!

HCF REWIND NO.38. BEFORE SUNSET 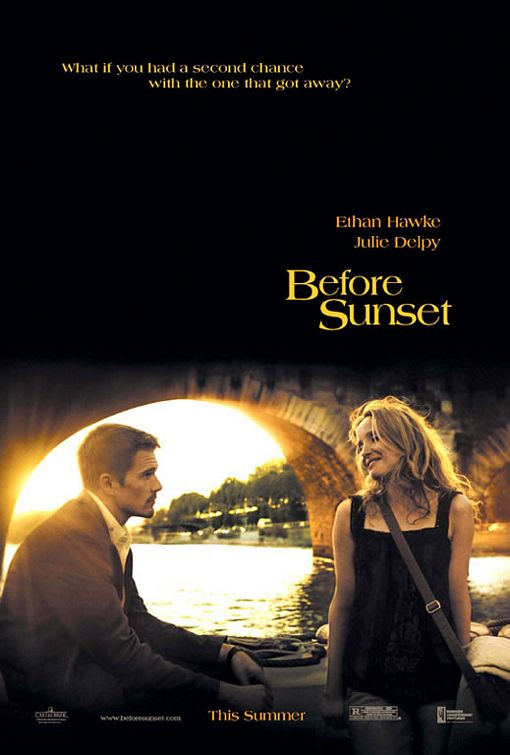 It has been nine years since Jesse and Celine spent that meaningful day and night in Vienna and agreed to meet up in six months time.  Jesse is in Paris, which is the final stop of a tour promoting his novel, which was influenced by his time with Celine.  As Jesse talks with his audience in a bookstore, Celine, having read the book, shows up.  Jesse has only just over an hour before he has to catch his plane, but asks Celine to show him some of Paris, and so the two converse and get to know each other again.  It transpires that Jesse showed up for their meeting, but Celine did not because her grandmother died……….. Lovers of Before Sunrise, like me, probably thought long and hard about whether Jesse and Celine, or one or the other, would show up at that meeting they mentioned having at the end of the film and if indeed they have a future together.  I suppose that romantics would say that they did meet up again, while cynics would claim that they didn’t, though I think that’s pigeonholing people a bit; I consider myself, sometimes anyway, as a romantic but often thought that neither Jesse nor Celine would show up, preferring to live with the idealism of their time together and not risk having that idealism tarnished.  Like many other fans, I partially wanted a sequel to Before Sunrise, to spend more time with these two people and answer questions that had been bugging me since 1994, but there was also a bit of me that didn’t.  Though I am certainly not one of those people who claim sequels are never as good as the original, Before Sunrise was so unique and different that a great sequel would be very hard to do.

Writer/director Richard Linklater, co-writer Kim Krizan and stars Julie Deply and Ethan Hawke knew better than anyone else the risks of doing a follow-up, yet decided to embark on one.  That they succeeded in creating a sequel that was certainly worthy of the first movie is something of a miracle.  I don’t think Before Sunset is quite as wonderful as Before Sunrise, but I don’t think it ever could be; during the nine years between the two movies, many of us have formed our own theories and assumptions about Jesse and Celine’s future after Before Sunrise, so no sequel could ever be perfect.  Hawke and Delpy co-wrote the script with Linklater and Krizan, and the film was shot in sequence on a low budget and in a mere fifteen days, during one of the hottest summers ever in Paris.  It easily recouped its cost and received a mostly warm welcome including even an Oscar nomination for Best Adapted Screenplay [it being a bizarre rule that scripts which are sequels are adaptations].

The film doesn’t waste time reuniting Jesse and Celine, and Celine’s appearance at the book shop is handled with great economy and dexterity.  As Jesse talks about his book, images of him and Celine in Vienna are shown to us, then we cut to Celine in the store, her barely changed appearance adding to the rather haunting sense of going back in time.  They soon start to walk about Paris, and an interesting feature of this movie is that it mostly avoids the typical Parisian landmarks, apart from a brief bit where they go past Notre Dame cathedral.  Because Paris is a very familiar city even to people who haven’t been there, this decision is an artistically justified one, but, whenever I watch Before Sunset, which I usually do a few days after the Vienna-set  Before Sunrise, I miss some of the local colour and detail which permeated Before Sunrise.  Things like the gypsy fortune teller, the poet and the dancer added their own important element to the film. Before Sunset, to be frank, could almost have been set anywhere.  All this was obviously intentional, so the focus is purely on Jesse and Celine, but to me it makes this second movie just a little bit less enjoyable.  Of course the geography again is literally all over the place, especially annoying if you yourself have been to Paris like me and fancied following in Jesse and Celine’s footsteps. Still, as the two talk and talk and talk in that ‘skirting around the issue’ way that characters rarely do in films but constantly do in real life, much of the magic of the first movie is recaptured.  Conversations range from politics to sex to work in the same lovely way as before, and again some engaging ideas of thrown up, such as when Celine tells of how she went to Warsaw when it was a Communist city, and how the lack of consumerism and things to do actually gave her a real sense of freedom. There’s also the great line “the past is great as long as you don’t have to deal with it”, adroitly telescopic many of the concerns of the film into a few words, and the very funny bit where Jesse talks of his brother going round loads of Buddhist monasteries and at each place having an offer to have his cock sucked! Of course this time round the conversations have an edge to them because you know both are trying to hold things back, and finally the emotions erupt in a truly heartrending scene, which I have no shame in saying always brings me to tears, in a taxi, where both people, for perhaps the first time in the film, say exactly what they want and truly bare themselves before the other person.

We are certainly given answers, other things that we suspected get confirmed, and some new things we learn, though there remains a delicious ambiguity at times.  Towards the end, Celine plays Jesse a cute little song she wrote on her guitar about a meaningful one-night stand, and drops in the name ’ Jesse’.  We are not satisfactorily told whether the song is actually about Jesse or not.  And the final scene leaves everything hanging.  You’re given clues as to what might happen next, but that is all.  Watching the film for the first time in 2004, I remember being rather disappointed by the fact that,  in a film that was supposed to give us answers and even ‘closure’, we ended up with more questions.  In time, I realised that that was the right choice, and not just because it leaves things open for a third movie [which may happen].

Though not a movie one would normally call a ‘director’s film’, Before Sunset is actually technically quite audacious, with a great percentage of the film taken up by long Steadicam takes.  Hawke and Delpy are even better in their roles; in some ways, they are those two people, and I don’t mean just because in real life Delpy lived in New York and Hawke was unhappily married and soon after got a divorce!  It’s interesting how Hawke appears to have aged considerably since Before Sunrise and Delpy has barely changed, though I’m going to admit that , having fallen a bit in love with her in the first film, I fell a bit in love with her all over again in this one.  The movie ends with her dancing to Nina Simone, mimicking the singer’s gestures and being so cute and adorable, as well as having such star quality that I really cannot understand why Delpy never became the huge star she should have been.  It also gives her character the only moment of true ‘release’ in the whole movie, almost a return to innocence, even to the mindset that her and Jesse had when first met, those nine years ago.  The past can never be entirely recaptured, but damn it we can try and maybe get pretty close.

PREDESTINATION (2014) Directed by The Spierig Brothers Citizens of America are living in fear as an unidentified terrorist, referred to as the ‘Fizzle Bomber’, is set to strike and wipe out 10,000 people in New […]

With just a few weeks to go before the release of Scott Derrickson’s new horror, Sinister, promotional activity is beginning to heat up. Already we have a second TV spot to share with you, and […]