Surprisingly, Thai horror flick The Victim (Phii khon pen) was actually made way back in 2006, so why it has taken this long to get a release is a little baffling. Back when it was made the Asian horror market was still thriving off the success of films like Ringu, The Grudge and even Thai’s own Shutter (all three suffered American remakes). Had The Victim been released here in the UK back then it may have found a much wider audience than it will sadly find today. Asian horror, while still thriving, has become a little stale of late, with the majority STILL using Sadako’s influence and, to be honest, I am growing tired of them. However, in recent months I have been seeing trailers for a number of interesting Asian horrors coming up, which proves the genre is far from dead and could possibly be due for a bit of a kick-start. So, maybe the timing is just right for The Victim?

The film see’s Ting (Sakakorn) attend acting class and is quickly noticed on the street by a police officer who requires her skills. Ting soon finds herself acting out a murder for the local police, in order for them to release a video in the hope it will attract witnesses who may be able to help them solve a murder. Much like the UK’s Crimewatch, here the Victim retraces their steps leading up to the eventual murder, and Ting becomes an overnight sensation. After a hilarious montage of clips from the video she is about to make, we witness the directors, cast, producers and police generally mucking about. It is funny, but you have to question why this was added in since they are trying to solve a murder case. However, once Ting enters her portrayal is so good the actor playing the killer can’t kill her, until he flips and plays out the stabbing whilst crying and screaming. In all honesty it is funny, and when the onlookers panic and begin to beat up the unfortunate actor, it would appear that we are actually watching a comedy. We’re not, and pretty soon the film takes on a more sinister edge… 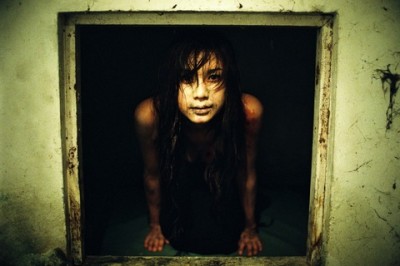 Ting becomes the go-to actress for these crime solving videos, making the headlines and loving the attention, and Sakakorn gives an impressive, convincing performance. However, we finally get to horror territory once she is asked to play the part of former Miss Thailand Meen, who it is suspected was murdered by her husband. The police department involved with the case get one of their female officers to play the part, before she meets a grisly death and suffers a heart attack. In true Ringu fashion we jump from the ghost attack to a shot of the officer dead, mouth open, face distorted and turned a dark and hideous grey. It would seem the spirit of Meen wants Ting to play her, and she is attempting to communicate with Ting about who really killed her. The guessing game about the killer is made far too obvious with the inclusion of a new character, however it would seem this was intentional as the director has a glorious yet baffling trick up his sleeve which I won’t spoil for you now. The Victim firstly plays like a comedy, then a murder mystery mixed with a classic Asian, or J-Horror ghost story, and even finds time for a romantic sub-plot. Basically, The Victim is trying to be everything all at once, and while I admire the directors spirit, there is too much going on here and the whole thing becomes very confusing. However, even though the film loses its way here and there, it is littered with numerous classic Asian horror moments: a standout scene see’s Ting trapped in a dark corridor with hundreds of creepy faces appearing in the shadows in the walls, the faces eventually come to life with dead bodies engulfing our poor heroine while Meen’s spirit watches on. The music to this scene and the sound effects are terrific, and immensely unsettling. Other classic moments are the look of the people who die throughout the film, and the many almost subliminal images of Meen’s ghost in the background. She appears in photographs and videos and generally creates a sense of menace and un-ease that only Asian horror can do. The pace is at times relentless, however there are times when the film could have done with shaving off a good ten or fifteen minutes.

The overall atmosphere is what wins the day here, and the atmosphere lends perfectly to the often jump-moment scares which come regular as clock-work. The cast all do a pretty good job, with the usual shouty moments and moments of madness, and Sakakorn expertly delves into dark territory come the films later scenes. The visuals here are superb, and the scares are masterfully created by some impressive special effects or makeup. We are even treated to that all important Asian horror ‘lift-scene’, however this film grants us a new and rather frightening twist. It is safe to say that the murder video of Meen is cursed, and this neat little Thai horror builds fear and tension around the idea of a ghost on-set. Yes there is far too many comical moments which dampen the tension, and yes the film often forgets its central plot: but, for fans of Asian horror The Victim has plenty to shout about. The film won’t win over any new recruits, but fans of the genre will find much to enjoy here!

Michael Biehn is about to make a name for himself as one mighty horror director as his new film, The Victim, prepares to come to DVD & Bluray here in the UK on 24th September. […]

The trailer for Michael Biehn’s new horror flick, The Victim, asks the question “who is the Victim?” Well, now thanks to Anchor Bay, we can all find out. Biehn not only stars in the film, […]