In 1830’s England, young medical student Victor Frankenstein witnesses the drowning of his brother. He bitterly renounces God and vows to find the secret to creating life himself. At his lodgings, he encounters Dr. Henry Clerval and witnesses him quickly and rather callously removing an injured person’s arm. Henry shares his quest and takes the younger Victor under his wing. When experiments in re-animating insects and a severed human arm succeed, the two prepare to bring to life a man whom they have assembled from body parts of victims of a mining accident. On the eve of their attempt, Henry discovers that the process will reverse itself and dies from heart failure before he can sufficiently warn Victor. Victor, committed to finishing the job, puts Henry’s brain in the creature and brings it to life………… 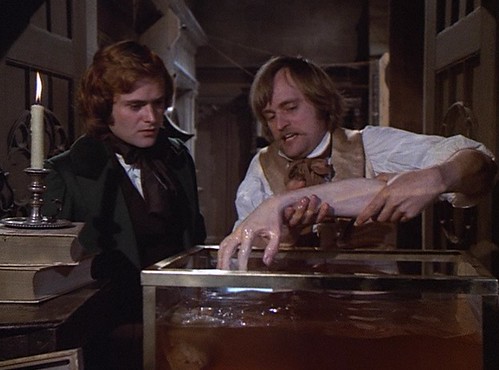 This ambitious production of Mary Shelley’s oft-adapted tale doesn’t seem too well known these days,  possibly because it was made for TV, but it really is one of the most interesting re-tellings of the story that deserves to be much more widely seen. Now I must say right away that it’s not a faithful adaption, despite its title giving that impression. In fact, the writers seem to be hell-bent on changing every little detail, while there are times when it seems to play like a compendium of earlier versions, notably Bride Of Frankenstein and most of the films in the Hammer series, but it has a conviction about it which carries it through and it really does explore its ideas in an intelligent way. Despite its lengthy running time, it never drags and was quite strong stuff for 1973 network television, even if today it seems coy in some scenes. For the modern horror fan, if you expect loads of gory thrills and chases then Frankenstein: The True Story probably isn’t the film for you, but if you’re intrigued by seeing one of horror’s greatest stories re-told in a clever manner, then I really recommend you check it out.With a fine cast and a script co-written by respected author Christopher Isherwood, it drew large viewing figures when it was shown in two parts, and a severely cut down version, reduced to 130m, was shown in the cinemas of several European countries including the UK, much like the later Salem’s Lot.

Now, apart from the improved picture quality, Second Sight’s DVD of Frankenstein: The True Story is superior to the old R1 DVD for one major reason. The original TV broadcast had a prologue where you see James Mason’s character stepping out of a carriage in the 1830s, in a few seconds taken from later on in the film, and into the present day [well, 1973] where he talks to the audience as he wanders through St John’s Wood churchyard in London. As well as fraudulently claiming that we are about to see Mary Shelley’s book transferred faithfully to the screen, he also bizarrely says that this is where Mary Shelley is buried and even shows you her tombstone, despite it actually being in the family plot in Dorset!  The original script had a prologue featuring the real life people the main characters were based on: Mary Shelley [Elizabeth], Percy Shelley [Victor], Lord Byron[(Henry/The Creature]  and Dr. John Polidori [Dr John Polidori], and that would have far better than what was eventually filmed. The R1 DVD had this clumsy, inaccurate and misleading opening, which was removed from the version taken from UK TV that I used to own, as part of the main feature, but thankfully Second Sight have rightfully thought it better to include it as a Special Feature, and I recommend you skip it! Writers Christopher Isherwood and Don Bachardy were actually unhappy with the finished production because many scenes [most notably a postscript involving the Creature] were cut out, and they published their original version of the screenplay for this film as a tie-in. They were also unhappy with casting – they had requested that Jon Voight be offered the part of Victor Frankenstein – and their hope that John Boorman would be hired as director was also dashed.

Nonetheless, what we have here is, for the most part, quite impressive, and yet in a way it shouldn’t work. As the story has been moved to England and Frankenstein is pointed in the ‘right’ direction by another scientist who is clearly a great deal madder than him, it becomes obvious that this is taking many, many liberties with its source, while you can begin to tick off elements from previous Frankenstein films: acid baths, the Creature disrupting a society function, the doctor with burnt hands needing an assistant, the Creature throwing himself off a cliff, and so forth. Even the movie’s most striking element; the Creature being initially handsome, was used in The Revenge Of Frankenstein, though the idea is done with much more depth here. Add to this a really mad scientist [this movie has three of them] called Dr. Polidori who is intent on world domination and actually seems to be inspired by both Dr. Praetorius and Fu Manchu, a touch of Pygmalion, and various other strands, and you have a right old mishmash which perhaps should not quite come off. However it does, partly because of the way it explores its themes and goes quite far with them, while Jack Smight’s direction, relying a lot less on close-ups like much TV stuff, is very confident and more cinematic than you might expect. He especially handles the creation of Prima well which has some visually striking images. 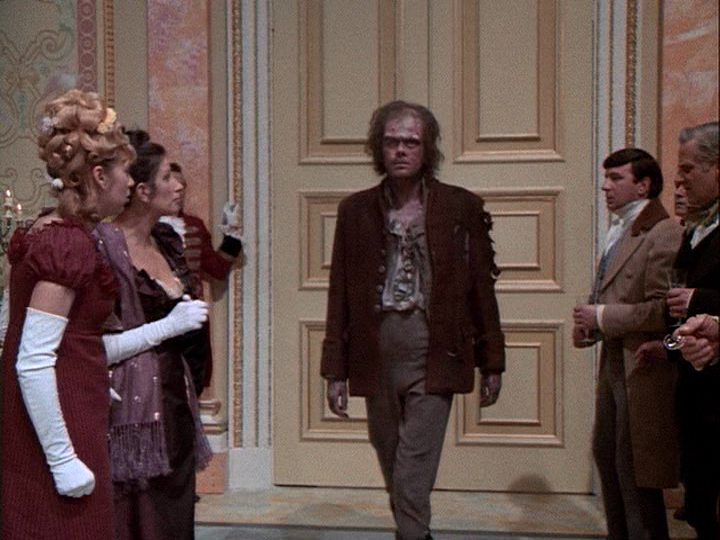 Having the Creature be handsome strengthens the idea of him being ‘sinned against’ rather than being a’sinner’, and am I the only one to notice a homosexual element in the relationship between creation and creator? This Creature is not only handsome but beautiful, shares a bed with his creator and constantly draws him away from his wife in a strange tug of war, while Frankenstein does not initially reject him. Of course not having the Creature be a ‘proper’ Monster means that Frankenstein: The True Story is less exciting than some versions, and even in the second half, as the Creature gets progressively uglier courtesy of excellent make-up by Hammer legend Phil Leakey, he’s more pitiable than scary. Even Karloff had his frightening moments. There is a scary monster in this film though, and that’s Prima, the female Creature, presumably because she was ‘born’ in a different way to her male counterpart. Though undoubtedly beautiful, I’m not often convinced by Jane Seymour’s acting. Here though, and this was just before she got her big break in Live And Let Die, she is fantastic, with uncanny movements and terrifying looks really convincing you she is purely evil. The way she cradles a cat, sings a song to it and tries to strangle it, than lasciviously licks blood off her arm, is very chilling. She also has a most memorable death scene which is one of those scenes that you may remember as being really shocking and bloody[ I did], even though you hardly see anything at all. It’s mostly achieved with clever editing and sound effects, and, though I enjoy my blood and guts, this seems to be a lost art these days.

The gore is on the level of a typical Hammer film; a few severed body parts, lots of partially off-screen deaths and the odd fairly nasty one, such as the Creature hurling a man against a wall and his head spattering the wall in blood. Conventional horror movie thrills are generally thin on the ground, as the film bravely prefers to explore the more intellectual aspects of the premise, but there are a few effective jolts nonetheless and the three hour film is certainly not boring. The effects, including a severed arm which has a life of its own, are pretty good and more convincing than in some bigger budgeted productions. The minimalist design of Frankenstein’s laboratory is actually more believable then the usual elaborate machinery, and this version gives you two ways of creation: solar power and pouring strange coloured liquid into a water tank. Good use is made of sets from previous TV productions, at times making the film look more bigger budgeted than it is. The final scenes set in the North Pole don’t entirely convince, but this was the first Frankenstein movie to employ the Arctic ending of the novel, though, as usual, it puts a slightly different spin on it.

Michael Sarrazin is very effective as the Creature, his usual awkwardness an an actor working really well for this role. His best moment is when he sees his disfigured reflection in shattered glass and wimpers “No! No!”. It’s very moving and the actor really helps make us feel his sadness. Sadly Leonard Whiting is rather weak, failing to convincingly show Frankenstein’s changing and conflicting emotions. The script seems to be making parallels with the way parents have to deal with disabled children, but Whiting fails to bring much realism. James Mason gives one of his best later performances as the dastardly Dr Polidori, clearly relishing the chance to be totally bad with no scruples, even if the whole character is one of the sillier aspects of the production. Ralph Richardson puts in a very touching appearance as the obligatory blind hermit; one look on his face, after things have gone wrong, tells you all you need to know about his distraught feelings. Gil Melle’s music score generally holds back, with little of the ‘blood and thunder’ approach favoured by Hammer and leaving many major scenes unscored, but this actually helps the film’s more psychological approach. There are some aspects of Frankenstein: The True Story that don’t quite work, but overall this is a fine Frankenstein movie, intelligent, a little subversive, and somehow managing to evoke Mary Shelley more than most of the more conventional and faithful adaptations.

Second Sight To Release FRANKENSTEIN: THE TRUE STORY on DVD in the UK on 10th March 2014

One of the most acclaimed versions of Mary Shelley’s classic Frankenstein: The True Story, featuring a stellar all-star cast including James Mason and Leonard Whiting, makes its UK DVD debut thanks to Second Sight Films. […]