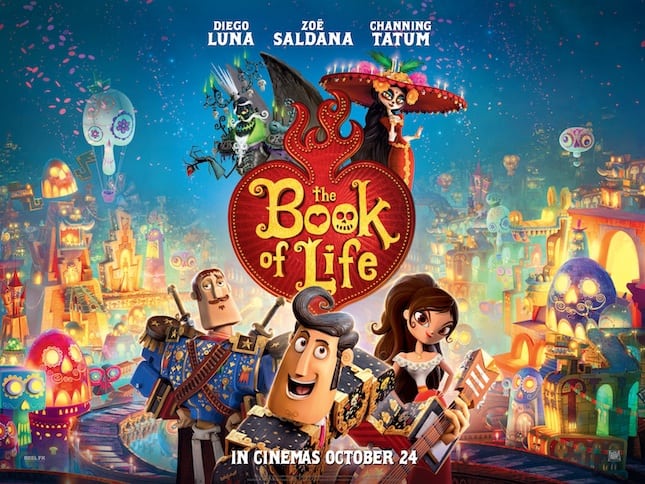 A busload of children visit a museum and are taken on a secret tour by a tour guide who tells them about the famous legends and myths of Mexican folklore. She leads them to a hidden room, containing the Book of Life, which holds every story in the world. She shows them the story of the Mexican town of San Angel and two gods, La Muerte: Ruler of the Land of the Remembered, where the spirits live on with their memories kept by their loved ones, and Xibalba: Ruler of the Land of the Forgotten, where the forgotten souls decay into oblivion. As they watched three children – Manolo, Joaquin and Maria, whom the other two are in love with – La Muerte and Xilbalba made a bet. If María grows up to marry Manolo, La Muerte would go on ruling the Land of the Remembered, but if she marries Joaquín then Xibalba would rule it instead….

The Day of the Dead festival is one of the most important ones in the Mexican calendar. It’s a celebration of the dead, which to some may seem distasteful but I’ve always found somewhat soothing, not to mention fascinating. The Book Of Life is, basically, the festival in the form of an animated movie. It doesn’t seem to be doing the business which the majority of most animated films seem to do at the box office, but then again it is quite a strange concept for a kid-friendly cartoon and, though it avoids scariness, the ‘U’ rating it has received in the UK is somewhat questionable considering some of its themes. The first film from Reel FX Animation Studios seems to sometimes lack faith in its story by putting in a ‘comical’ gag every few seconds to soften things and keep the younger ones occupied, even if it’s not really a film for very small children anyway, while the tale doesn’t really need this kind of thing. Nonetheless, writer/director Jorge R. Gutierrez obviously relishes the opportunity to celebrate Mexican culture and has created probably the most visually intriguing animated film in some time, with characters looking like they’re made of wood and simply fantastic,  eye-popping use of colour. The moment where we first see The Land Of The Remembered, even if we’ve seen a bit from it in trailers, is one of the stunning moments in recent animated film history. The entire film does what all the best animated features do – create its own unique world and have the viewer totally immersed in it, though some of the grotesque design takes some getting used to, such as the huge heads many characters seem to have.

The story, which bears some similarities to that of the Greek myth of ‘Orpheus In The Underworld’, basically boils down to the old chestnut of two men being in love with the same woman, and amidst all the frenetic stuff are some genuinely sweet and touching sequences, though I can’t be the only one who found the relationship of La Muerte and Xilbalba, the two gods who compete and argue but clearly lust like hell after each other, as interesting as, or more so, than the central romantic trio. You do though have to love a film where the wooden Channing Tatum voices a character who’s literally made of wood. The music relies too much on previously used stuff and what’s new isn’t too great, but it’s so easy to forgive such flaws when you are taken on such an incredible journey, and shown such incredible sights, with this film. Its themes of love, family, friendship and respect for the dead may seem to be primarily Latino but are also universal, though I may scream if I see another animated film where: “Be yourself” is a primary theme. The Book Of Life has some minor problems, and doesn’t quite top How To Train Your Dragon 2 as this year’s best toon movie, but it’s still quite unique and extremely admirable in its ambition. I hope it will find its audience in time.

Marvel’s lesser known heroes, Guardians of the Galaxy, has been a bit of a mystery over the past year, with just small casting updates trickling through (although the cast is very impressive). The […]