PIRATES OF THE CARIBBEAN:ON STRANGER TIDES 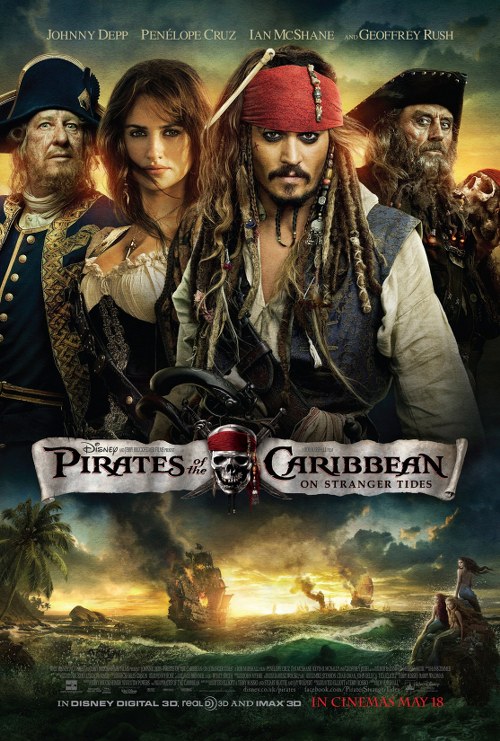 In London, Gibbs is on trial for piracy, but his judge is actually Captain Jack Sparrow in disguise, and they escape the court.  Hearing that an impostor Sparrow is auditioning pirate recruits at a seaside bar, he goes to investigate and finds it’s an old lover of his Angelica, whom he seduced while she was in a convent.  Angelica captures Sparrow and he find himself aboard a ship lorded over by Angelica’s father Captain Blackbeard, who wants Sparrow to help him locate the Fountain Of Youth.  Meanwhile Sparrow’s old rival Captain Barbossa, who has abandoned his pirate ways and is now a servant of the crown, is also searching for the Fountain Of Youth………….

Upon its release in 2003, Pirates Of The Caribbean:The Curse Of The Black Pearl seemed to take everybody by surprise.  Apart from being the first pirate movie that hadn’t flopped since the 1950s!, the way it resurrected all the hoary old pirate cliches, revelled in them and gently mocked them at the same time was masterful and a very skilled balancing act.  It had the feel of an old fashioned matinee movie but with a knowing modern attitude and of course laced with the best CGI.  It also created one of modern cinema’s greatest characters in Captain Jack Sparrow.  Now many critics feel things went wrong with the first two sequels, Dead Men’s Chest and At World’s End, I don’t entirely agree, the former was almost as fun as the original in my opinion but the latter was definitely a bloated, confused, often stupid and, most bizarrely, often dull mess, albeit with a few great scenes and ideas.  During the run up to this slightly belated fourth instalment, we heard much from people involved with the film about how this one was going to return to the more straightforward and fun style of the first movie.  I’m happy to say that, for the most part it does, and works very well as a seafaring adventure film on it’s own, though it does have quite a few problems, sad to say!

After a wonderfully pulpy opening scene, we waste no time in being introduced to our hero, who now is Sparrow for once, rather than somebody badly played by Orlando Bloom, and we launch in into a breathless series of chases and escapes, with the highlight being a great carriage chase.  Perhaps to compensate for the slow movement of At World’s End, the pace of the movie is immediately far faster than the other films, and it’s great!  Of course we soon get into the main journey, and surprisingly the film still refuses to slow down.   Interestingly, at this point, the film also starts to have a surprisingly dark tone.  Most scenes are set at night, and Dariusz Walski’s cinematography has a real Gothic look to it.  Then we get into the film’s greatest sequence, a lengthy battle with mermaids, and it’s great to see mermaids portrayed like the mermaids of pirate folklore for once, vicious and nasty.  What makes them particularly effective is that they are not shown that clearly.  Dead Men’s Chest and particularly At World’s End threw the CGI on to the screen in bucket loads and the quality of the effects seemed to diminish the more they were used.  In this episode, it’s used more sparingly, and it actually increases the effectiveness of some scenes, especially those involving the mermaids.

About half way the film starts to slow down a little but remains fairly exciting, though scriptwriters Terry Rossio and Ted Eliott can’t resist throwing in a bit of the double cross stuff which helped to bog down At World’s End.  It’s not too much here though.  Unfortunately, the horrible spectre of Twilight rears its ugly head, with a subplot involving a man and a mermaid.   Of course there’s nothing wrong with the basic idea, which has been the subject of many stories and indeed films, from Splash to The Little Mermaid,  but here it’s been Twi-fied  [I’ve decided, I’m going to use this word, which I made up a while back when reviewing Beastly, whenever I deem fit], so you get lots of intense glances where people actually look like they are about to be sick, awful acting, and horrible dialogue.  Now this stuff isn’t in the film enough to totally ruin it, but they could have removed it with no loss.  Sadly once we get to the Fountain Of Youth, the film totally loses the plot in more ways than one.  Of course it’s a common problem with quest movies that they rarely exploit the thing that is being looked for once it is found, and perhaps it’s understandable, especially when sequels might be forthcoming, but Rossio and Eliott obviously didn’t know what to do towards the end of this movie so they copied situations and scenes from Indiana Jones  And The Last Crusade. There’s a bit of brief sword fighting that seems pathetic compared to the full on climactic action of the other three films, things kind of happen that don’t make any sense, and then it ends with some laughs and suggestions of a sequel.

I’ve criticised the script several times in this review, and it is very flawed, with far too much of it consisting of Sparrow being captured and then escaping in an elaborate and funny way.  I think they should have had a new writer alongside Rossio and Eliott.  Now this movie’s script was actually based on a novel called ‘On Stranger Tides’ by Tim Powers and I wonder if the writers had trouble adapting it into a POTC movie?  The writers do succeed though in the amount of time devoted to Sparrow though, they resist the temptation to have him on screen all the time, even though he is basically the ‘hero’ this time round.  The bickering between him and Angelica is also good, funny but nicely barbed, and this part of the story ends in a surprising and brave way which I certainly did not expect.  This episode is smaller in scale than the last two movies, maybe even the first, and, while it’s nice to have a more focused story, there aren’t really any fantastically memorable sequences except for the mermaid attack.  Apart from some of Sparrow’s antics, which, despite what some critics have been saying, remain tremendous fun because you just don’t know what he’s going to do some of the time, there’s a dearth of originality, and that’s a shame, because the film is certainly entertaining and has it’ s heart in the right place.

Rob Marshall takes over from Gore Verbinski but I defy anyone to notice the difference. I’ve read reports that the action scenes are overly fast and choppy like in many films these days, but it just isn’t so, at least in the 2D version.  I personally don’t like characters looking like cardboard cut outs, action hurting my eyes and the picture being too dark, so I don’t bother with 3D anymore.  I really wish they’d give this clapped out gimmick, which is still a long way from being perfected and more than anything else an excuse to raise seat prices, a rest, but it doesn’t look like they are going to, so I will keep on moaning about it!  Johnny Depp is as wonderful as ever as Sparrow, he looks like he’s having fun every minute, though he does seem like a rather kinder Sparrow here and has possibly lost a bit of his edge.  Surprisingly he is almost matched by Penelope Cruz who is a great foil for him [and really shows up what a poor actress the incredibly overrated Keira Knightley  is], while everyone else has enormous fun playing pirate.  Composer Hans Zimmer seems mostly to be content with rehashing themes and motifs from earlier films, some of which might be nice to hear, but compared with his great work on At World’s End [why did the worst film have the best score?] it’s a severe disappointment.  On Stranger Tides certainly entertains, it’s solid viewing for the family and there’s not enough of that at the moment, while it gets things right more than it gets wrong.  It’s better than At World’s End, that’s for sure.  However, I really dislike it when a film is great for its first half, then goes downhill and has a poor ending.  It can’t help but send me out of the cinema with feelings of both irritation and disappointment, and sadly I felt both those things after On Stranger Tides, a real shame for a movie that is actually pretty good.

“Justice is what I seek…” the new trailer for Disney’s ‘The Lone Ranger’ is here, with tons more Johnny Depp!!

A second trailer has landed for Disney’s The Lone Ranger, and while the first trailer only hinted at the fact Johnny Depp was in it, the second trailer allows him to take centre stage. The […]

As a fan of Guillermo Del Toro’s Hellboy films, I wasn’t overly pleased to hear that a reboot was coming from Neil Marshall, despite it intended to be an ‘R’ rated movie [which of course […]