“Daddy’s gonna stroll down that far subterranean shore, all littered with the flotsam of hopes and dreams. Relics of ancient times. Lonely cenotaphs. Standing along that melancholy tideland.”

Terry Gilliam, I must be honest is a film-making God (or Messiah, 😆 ) in my book so I’m a wee bit biased when it comes to his movies. I avoided this on its release back in 2005 due to the mainly hostile reaction from snobby critics who I now realise couldn’t deal with the fact that here was one of cinema’s true mavericks, a guy who gave two fingers to Hollywood and has been scorned by the system ever since giving us one of his best and most original works in years. This film definitely divides opinion and in a good way. For one thing it’s very dark, mysterious, poetic, challenging and its blacker than black humour will put off some people.

I find all the negativity at odds with the film itself as its gorgeous to look at wonderfully melancholy and hauntingly beautiful.

Young Jeliza- Rose is taken off to a remote dilapidated farmhouse after her junkie father (his Dudeness himself Jeff Bridges) accidentally kills her mother during a drug crazed binge. On their first night he dies from a heroin overdose and Jeliza-Rose starts to frequently retreat in to her imagination to compensate for the loneliness of the real world. She plays and talks to dolls heads who all have different personalities and give her differing advice. Throughout the film she doesn’t seem to acknowledge her fathers death, leaving him rotting on the living-room chair, chatting to him and dressing him up.

She eventually comes in to contact with some neighbours, a scary old woman Dell, who is blind in one eye due to a bee sting, and her younger mentally disabled brother Dickens. They take Jeliza- Rose on board and even preserve her fathers body via taxidermy! It turns out Dickens has some history with getting in to trouble and is obsessed with killing what he thinks is a ‘Monster-Shark’ which is actually a passenger train that passes the farm frequently. We are left by the director to figure out if all these crazy goings on are real or as a result of Jeliza – Rose mental state.

The film has many memorable moments, such as talking squirrels, a magnificent underwater dream sequence and a scene that develops a strangely romantic connection between Jeliza- Rose and Dickens, which apparently put many stuffy critics off the film. All I can say is trust the director and nothing bad will happen! 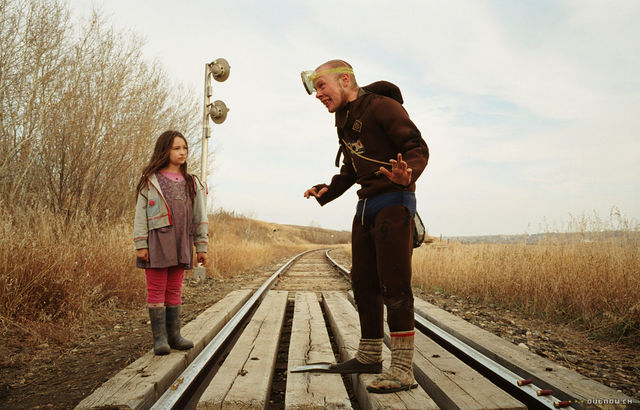 I wont give away the ending as it’ll spoil it but I will say don’t expect a conventional one. This is Terry Gilliam after all! What I will say is the film is IMO one of Gilliam’s best work, it’s certainly one of the darkest films he’s ever made and possibly the most risky as well. It actually has a lot of comparison with Pans Labyrinth (it was actually released a year before), with themes of innocence lost, childhood imagination, loneliness and although it doesn’t come close to Guillermo Del Toro’s mighty masterpiece it is too damn clever and original too be forgotten or dismissed as one of Gilliam’s lesser works. I actually enjoyed this more than the Imaginarium of Dr Parnassus and that film got a heap more praise. So if you fancy a night of dark, strange weirdness then give this film a try and hopefully you’ll enjoy this as much as I did.

If, like me, you cannot wait much longer to see Terry Gilliam’s bizarre looking new film, The Zero Theorem, then hopefully these three featurettes will keep you going until the film release. The featurettes […]

The Python’s back together for animated autobiography of Graham Chapman

Quite possibly the funniest bunch of fellas ever to walk the Earth, Monty Python are getting back together to start work on a new project. Roughly ten years before his death, Graham Chapman wrote a […]