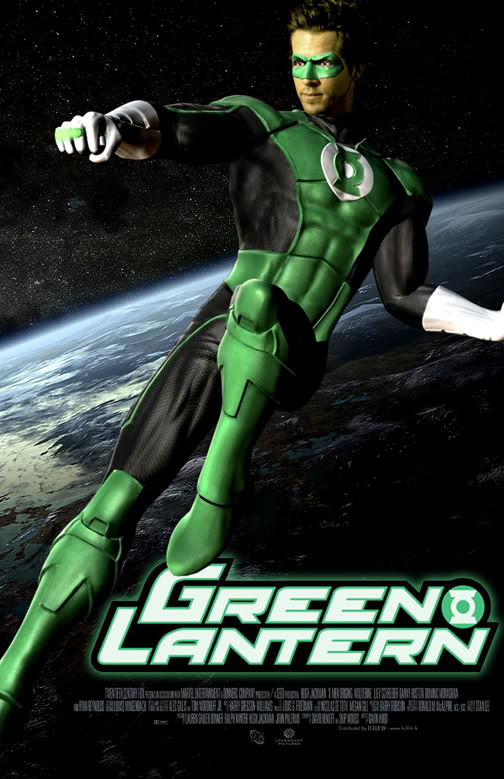 For centuries the Green Lantern Corps have been protecting the universe. However an ancient monstrosity called Parallax has been steadily growing and kills several Green Lanterns.  Abin Sur, a highly skilled Green Lantern, confronts the monster and is mortally wounded.  He crashes on Earth and his magic ring, something which all Green Lanterns have, chooses fool hardly, hot headed pilot Hal Jordan, to be the next Guardian.  Hal, who refuses to commit to his childhood sweetheart Carol Ferris and has almost been sacked from the air force due to a botched training exercise,  is not sure what to do though discovers he has great strength and is soon transported to the planet of the Green Lanterns……….

Green Lantern has had mainly poor reviews and hasn’t been too successful at the box office either, though it’s certainly not as bad as that. As with Thor, it goes for a mainly light approach, with some laughs that do actually work, but sadly ends up being more The Fantastic Four than Spiderman, with disappointingly little action [why do so many recent superhero film resolutely fail to deliver in that respect?] and just no real edge at all. I wonder if there is a much longer Director’s Cut in the offing? The opening sequence is almost incomprehensible unless you’ve brushed up on your DC comic books and because no attempt is made to ground anything in something resembling reality and nothing is deemed worthy of explanation, it’s hard to care at times.  The whole story in the film seems rushed, but it still just about remains entertaining, with an especially fun training section, and is a visual feast at least.  Though all the effects are done through CG, some of them are really quite inventive and almost have a surreal feel about then, such as Hal creating……….a racetrack during an action scene, and Parallax, sort of a giant rock head with tentacles, is a rather unusual menace.  I also loved some nicely wierd touches such as some ancient Green Lanterns perched on the top of huge stick-like rocks with their cloaks going almost all the way down to the bottom.  As often seems to be the case at the moment, the climax is a little lame, with the great concept of Parallax attacking Earth thrown away. Ryan Reynolds is typically likeable and typically uninteresting, while Peter Sarsgaard gives a fun performance as a villain.  Not horrible, and should shut the kids up at least, but could have been so much better.

So far they haven’t really revealed very much about Life except the basic premise, which is definitely a good thing in my book, but a Red Band trailer [no sex or violence but a bit […]

Despite nearly $800m for each film….yes a staggering amount, it seems that since Disney purchased the film studio FOX, there are no plans at the moment for a Deadpool 3. This is according to […]

Kevin Bacon continues his roles as a villain in Universal’s R.I.P.D

Now here’s a comic book adaptation I am almost losing sleep over with excitement! The film R.I.P.D is based on a Dark Horse comic written by Peter Lenkov. The film is being directed by Robert […]