HCF may be one of the newest voices on the web for all things Horror and Cult, and while our aim is to bring you our best opinion of all the new and strange that hits the market, we still can not forget about our old loves, the films that made us want to create the website to spread the word.  So, now and again our official critics at the HCF headquarters have an urge to throw aside their new required copies of the week and dust down their old collection and bring them to the fore….our aim, to make sure that you may have not missed the films that should be stood proud in your collection.  Here, Dr Lenera takes a look at a rare animated fantasy from 1982, that you may probably think is just for kids, but you would be wrong.

In an enchanted forest, a unicorn learns that she is the last of her kind and decides to embark on a quest to learn what has become of the other unicorns. The unicorn discovers from the addled talk of a butterfly that a demonic animal called the Red Bull has herded all of her kind to the ends of the earth.  Venturing into unfamiliar territory beyond the safety of her forest home, she begins a journey to find them and bring them back.  First of all, she encounters a witch called Mommy Fortuna, who captures her and puts her on display with some other fantastical animals, but an incompetent magician called Schmendrick, who is reluctantly working for Fortuna, befriends her……….. 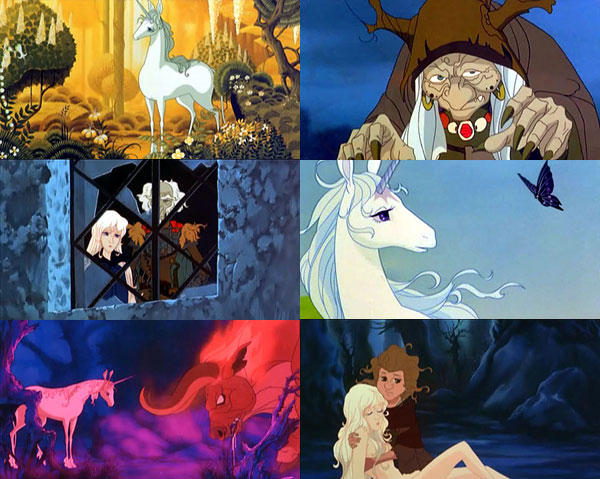 The Last Unicorn is a very interesting and quite unusual animated movie which has obviously been marketed for children but, like the classic Disney features, it can actually be enjoyed by adults just as much.  It deals with many adult themes, such as loss of innocence, mortality and corruption, is literally crammed with metaphors, and is very bittersweet for much of its duration, but these elements never become so weighty that a child can’t enjoy the film or understand the basic plot.  Unfortunately, though the film does have a cult following, I don’t think it’s got the attention it has deserved.  I think if it had been made by Disney it would be regarded as maybe not quite one of their masterpieces but certainly a classic in its own right.  Maybe one day.

The original script was by Peter S.Beagle who wrote the original novel of the same title, and out of necessity he whittled the book down to its essentials.  I have yet to read the book and intend to as soon as possible, but Beagle supposedly retained practically all the story and certainly all of its tone and meaning.  A variety of animation studios were asked to make the film, and all refused except Rankin/Bass, whose involvement originally horrified Beagle.  This company, headed by Arthur Rankin Jnr. and Jules Bass, had made quite a few fine animated films including The Flight Of Dragons and The Hobbit, though the less said about their version of The Return Of The King, made as a sequel to Ralph Bakshi’s The Lord Of The Rings [because that version ended two thirds of the way through the trilogy of books], the better!  The film attracted a major cast to do the voices, including Jeff Bridges, Mia Farrow, Alan Arkin, Angela Lansbury and Christopher Lee, who apparently kept badgering the filmmakers to add more scenes from the book!  Despite this, it only did average business on release, and some later versions were cut, mostly removing utterances of the word “damn”, so you have to be careful which DVD you buy [the current R2 edition is uncut].  Since 2003, the film has been the subject of a legal dispute with Beagle fighting the current owners Granada International for a share of the profits, something which he claims has been withheld from him.  The case is still going on.

I knew this movie was going to be pretty special right from the opening titles, where, accompanied by an admittedly rather mawkish song, we see what looks like a Medieval tapestry and with each line of the song, we are shown something on the tapestry which corresponds to whatever the words are describing.  Then we treated to several layers peeling back, a la early Disney, to reveal a gorgeous wood backdrop.  The story gets going really quickly, with a comical butterfly character telling the unicorn enough information to set her on her quest.  This creature speaks in a very random way, mixing poetry and song, some of it well known, and it’s like a later Disney or Dreamworks ‘comic relief’ sidekick, though surprisingly the butterfly isn’t in the film after this scene.  The rest of the film really is fairly serious in nature, apart from a bizarre little segment featuring a very amorous tree [honestly] and a wonderful skeleton character near the end.  In the manner of many great quest stories, the unicorn encounters a variety of characters along the way, some good, two of whom join her, and some not so good, such as Mommy Fortuna the witch.

Now even though there is a hair- raising encounter with the Red Bull quite early on, this isn’t an action filled cartoon, but it’s packed with incident and has some wonderfully conceived and realised scenes such as the accidental conjuring up of Robin Hood and his Merry Men.  Just over half way through the unicorn transforms into a human woman, the Princess Amalthea, and although the pace slows once we reach the castle of King Haggard, who has been controlling the Red Bull, the film becomes not just a quest tale but a very touching story of impossible love as Amalthea is courted by Prince Li.  There’s a really beautiful sequence where the two characters sing a haunting song of their thoughts and we see images of these thoughts, such as a wonderful bit of Amalthea and Li transforming into seagulls and flying into a forest glade, where they transform back and dance.  Of course we do get an exciting climax, which boasts another incredible set piece involving waves forming unicorns, and for once I really didn’t know what was going to happen on first viewing.  This is something you can never really say about the Disney movies, you know everything is going to be alright, the hero will go off with the heroine, the villain will meet his/her end ,etc.   Towards the end of this movie, I really wasn’t sure.

The animation was actually mostly done by a Japanese studio called Topcraft and most of its members went on to become core members of Studio Ghibli.  Therefore The Last Unicorn is visually a wonderful mixture of Oriental and Occidental animation, with the characters looking 70% American-style and 30% percent like anime characters.  Almathea really looks like a typical anime heroine except for not having the typical large eyes.  Likewise the actual animation looks like the missing link between the 60s/70s Disney style, where the employment of the Xerox machine [which transferred the initial drawings into the cells] resulted in a graphic, almost newspaper cartoon look, and the more fluid style of the emerging Japanese animation style.  Now I’ve said earlier that this film is full of adult themes, some of which I mentioned previously, and I think you can add a vague environmental element [the way humans in the film are encroaching on nature, for example], and also the idea of, do we really see the truth or do we just see what we want to see?  Honestly, this theme is all over the movie, from the captive creatures that Fortuna has collected which appear as mythical animals to those who want to see them that way, to Li seeing something special in Amalthea but not really knowing what it is.  The actual characterisation and character development in The Last Unicorn is superb, everyone changes throughout the film, and everybody, even villains, reveal things about themselves that you wouldn’t expect.  The only villain who remains a villain is the Red Bull, who doesn’t seem to have a personality at all, but then he’s more of a machine than an animal, made to just drive the unicorns to Haggard’s kingdom and that’s all.

The voice work is superb by everyone, though the songs are a slightly different matter.  They often seem to tell us what we are seeing and were possibly included to make the story easier for children to follow.  Written by Jimmy Webb, the two sung by the band America [no, I hadn’t heard of writer nor band before I’m sorry to say] are okay, pleasant and forgettable, but the two songs sung by Mia Farrow, and/or Jeff Bridges are gorgeous, though neither are great singers  [most animated films have different people voice the characters when they sing].  I can’t really think of much else that I would change about this quite wonderful movie, which I was sure would be worthwhile but not the haunting, thought provoking work of art it is.  Yes, I say haunting, because, despite everything else, it’s a palpable sense of loss and sadness that the film will probably leave you with more than anything else, without being actually depressing.   A live action version has been mooted a few times, which has been mooted, is great because I think the story could easily be expanded upon and turned into a terrific fantasy movie, but I doubt the result will be as good as this animated version.

Princicipal photography has begun on Warner Brothers and Legendary Pictures new exorcism flick, The Seventh Son. The film is due for release in February 2013 and with an all star cast and director Sergey Bodrov […]

In the works for what seems like forever, Warner Brother’s supernatural fantasy come exorcism flick, The Seventh Son, has finally revealed its first look. Warners released two official images from the film yesterday, and thankfully […]