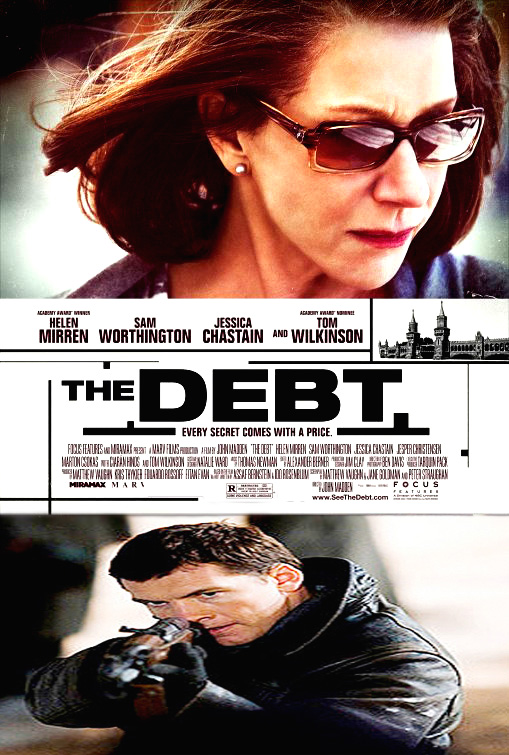 1997.  Rachel Singer is giving a speech celebrating the publication of a book by her daughter.  This book details certain events in 1066, where Rachel, a retired Mossad agent, was part of a three person team who tracked down Nazi war criminal Dieter Vogel, the ‘Surgeon Of Birkeanu’.  After a brutal fight, Rachel shot him as he tried to escape.  Elsewhere, one of her two ex-colleagues David Peretz seemingly kills himself by walking into moving traffic.  This is witnessed by the other colleague, Stefan Gold, who tells the shocking news to Rachel.  Rachel begins to remember past events, which may have happened somewhat differently to the ‘official’ story………….

The Debt is a remake of a 1997 Isreali film of the same English title, which translates into Jewish as Ha-Hov.  I think most of you will agree that American remakes of foreign language films usually turn out to be inferior, but I haven’t seen the Isreali movie, nor in fact had I heard of it until reading about this version.  Considering it appears to be hard to see or obtain, I’m not going to refer to it any more in this review, except to say that, from what I have read, the remake is very close.  It’s also quite a rewarding thriller that is pretty gripping and doesn’t need car chases or explosions to be so.  It explores several important moral questions about truth, such as, is lying ever really an acceptable cause of action, and delves a little into the subject of Nazi war crimes [something I find morbidly fascinating], though not very much.  One thing it isn’t is like Munich, despite what you may have heard.  This is a more twisty, morally ambiguous and downright interesting [if not always believable!] story, and to me is the better film, strange as Guy Madden has not been a director I’ve appreciated much before [Shakespeare In Love and Captain Corelli’s Mandolin I’m afraid did little for me!].

The film is a little confusing at first.  One reason is that, because some of the very early scenes are so short, it’s hard to take in all of the information you are being given – I would have preferred a slower introduction.  Another reason is, and this is a major problem, the older versions of the characters just don’t look much like their younger counterparts, to the point that a couple of times I had trouble working out who was who!  Still, once we get into their mission, the movie really begins to work very well indeed.  The building up to the kidnapping of Vogel is superbly managed, with some really uncomfortable, almost queezy scenes where Rachel, working undercover, is examined by Vogel who is working as a gynaecologist.   The actual kidnapping, with the agents having to smuggle their victim across what was then the Iron Curtain, [which separated West Germany from East Germany, and was heavily guarded], really is suspenseful, and I was actually thinking Alfred Hitchcock at a few moments, so well was it done.  After this the movie becomes more of a psychological kidnapping story, with the three agents starting to lose control and the clever Vogel beginning to manipulate first Rachel, and then David.  The tension rarely diminishes though I must say that the three agents seem to be pretty unprofessional Mossad agents, and when the story switches to the present day for its final act, it loses some of its power.  It remains exciting to the end, but the implausibilities mount up and it winds up too reminiscent of the ending of The Boys From Brazil, a film I do admire but became a bit laughable in its final reel.

Now as said before there’s not a great deal of action contained in the script [surprisingly co-written by Matthew Vaughn and Jane Goldman] but the plot does move forward steadily and takes in at least two nice twists which certainly worked for me.  What violence there is,is extremely brutal; this is one of those movies where, if a character is stabbed or kicked in the head, you really feel it.  A romantic element, with both guys after Rachel and she only really falling in love with one of them, seems rather ‘shoehorned’ in at first and not too well written, but towards the end it does actually affect much of the plot and is even a bit moving.  I could have done with this film being a lot longer [it would make a great TV series!], and gone into more details about certain things such as the nature of Vogel’s crimes [though some will say that some disturbing photos tell you all you need to know!] and the characters, especially Rachel, because most of the events are shown from her point of view.  Towards the end, the film still reminded me [honestly] of Once Upon A Time In America with its themes of betrayal, lost love, inability to escape the past, living a lie etc.

Madden directs with a sure hand and even dares to break one of cinema’s ‘rules’ – the camera cannot lie.  Back in 1950, Hitchcock got into deep trouble when his movie Stage Fright showed a supposed flashback which turned out to be inaccurate, and though in this movie I have yet to read it commented on, it’s still quite surprising to see it. The performance side of the film are mostly excellent.  Sam Worthington still hasn’t convinced me he is much of an actor and his accent is dreadful, but Jessica Chastain and Martin Csokas are fine as the young Rachel and David, and Helen Mirren gives one of her best performances yet as the elder Rachel, really convincing us that here is a woman who is tortured by her past every waking moment.  Unfortunately, the younger and older versions of each character just don’t look like each other; in fact, I think that the guys playing David and Stefan should have swapped places!  Jesper Christensen as Vogel really suggests deep evil and is especially brilliant when he trying to manipulate his captors, with one particular speech where he says how the Jews prefer dying to living and in the concentration camps could have escaped the gas chambers if they wanted to, being one of the most chilling scenes I’ve seen this year.   There seems to be a small phase, with movies like Tinker Tailor Soldier Spy and Drive, of intelligent yet still entertaining, movies for adults going on at the moment, and for me, despite a few glaring faults which I couldn’t quite overlook, The Debt continues the trend.

Three is much to do in first full length trailer for ‘The Huntsman: Winter’s War’

As promised earlier this week, the full length trailer for The Huntsman: Winter’s War has been released, and it aint too bad. It’s a little playful, full of action and light hearted comedy in places […]