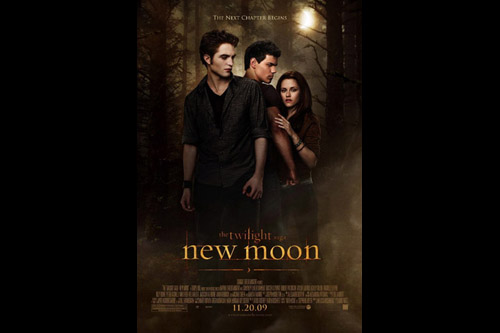 When one of the other Cullens almost kills Bella after she has cut herself, Edward realises how much of a danger they are to Bella and, after ending their relationship, leaves the town of Forks with the others.  Bella is heartbroken and depressed but when her father threatens to send her back to live with her mum she makes the decision to start socialising again.  She begins to spend more and more time with Jacob and her pain starts to ease, though Jacob obviously has stronger feelings for Bella than she has for him. However, Jacob starts to avoid her, and eventually finds out that he is a werewolf.  His pack members are on constant patrol forVictoria, a vampire whose mate was killed by Edward and may take his revenge by killing Bella……….

The first Twilight was poor, but this horrible sequel makes it resemble Citizen Kane.  Honestly, this is an embarrassingly awful, tedious piece of crap that sadly its target audience seems to be lapping up. While the director of the previous movie Catherine Hardwicke seemed to at least have some kind of handle on the material and did her best to make you care about proceedings, Chris Wietz [who previously screwed up The Golden Compass and so obviously has no flair for fantasy] just seems totally lost.  The screenplay is horrendous, with some scenes, especially in the first half, going on far too long and with even some dialogue scenes virtually repeating what’s been said in a dialogue scene ten minutes earlier.  Honestly, one scene comes along, then a few minutes later you may very well see the same scene again in a different setting.  On the other hand, the action in the second half seems really half hearted, rushed, and on one instance ruined by a song just plonked over the action. Some of the back story is admittedly quite interesting but, despite the extremely slow pacing, it’s as if some of the important information is missing.  No attempt is made whatsoever to have a bit of tension and the CG werewolves are amazingly unscary and unconvincing.  Judging by this movie, CGI is getting worse, not better.   Kristen Stewart, I will admit, is easy on the eye, which may explain why I stayed in the cinema, but her acting is so wooden I expected her to start sprouting branches, and what on earth does Edward see in this miserable slouch?  Then again, what does she see in this personality-free psycho who just scowls and looks like he’s about to throw up?  Taylor Lautner just takes his shirt off every now and again rather than actually act.  Far too boring to be unintentionally funny, I was obviously wrong in thinking that the second Twilight movie would really get this franchise going properly, and am now dreading the next book being filmed.  Sadly, being both an idiot and a glutton for punishment, I will still probably go and see it.

ROBERT PATTINSON TO PLAY…LAWRENCE OF ARABIA

Yes, you read that right.  The Twilight star is to play the role made famous by Peter O’ Toole in the classic 1962 film Lawrence Of […]

I can hear the Robert Pattinson girly-fan squad screaming right now with excitement at the release of upcoming, period drama, BEL AMI. Just as well that Studiocanal have just released the new quad poster for […]

SNOW WHITE AND THE HUNTSMAN: in cinemas now