THE TREE OF LIFE 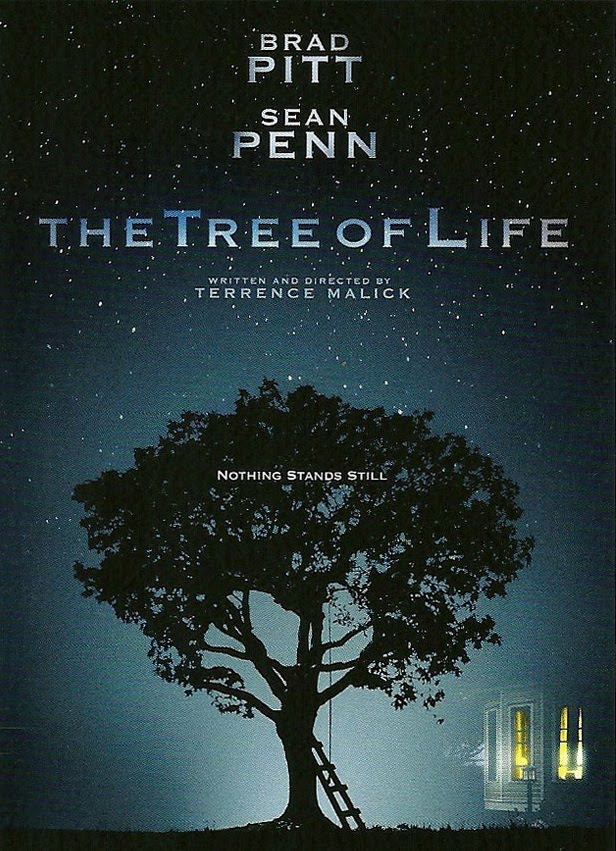 In the mid 1960s, Mrs O’Brien recalls a lesson taught to her that people must choose to either follow the path of grace or the path of nature.   She receives a telegram informing her of her son’s death at age 19, and the family, which also consists of her husband and their two other sons Jack and Steve, is thrown into turmoil.  In the present day, Jack O’Brien is adrift in his modern life as an architect. When he sees a tree being planted in front of a building, he begins to reminisce about his life as young teenager during the 1950s.  We , however, witness the creation of the universe, Earth and life on Earth, before we switch to his childhood……… Though I certainly have my favourite genres, I’m the kind of film fan who enjoys all kinds of movies [except maybe romantic comedies].   You may find it strange that this critic, who spends  the majority of his time on this site writing about either the latest Hollywood blockbusters or old horror movies, is about to rave about an impressionistic, intellectual and almost obtuse ‘art house’ meditation of life, death and the universe, but that is what is about to happen.  The Tree Of Life is cinematic art with a capital ‘A’, and I think it’s a truly beautiful, spiritual achievement, though I must state straight away that there is a good chance you may hate it as well as love it.  This movie seems to have divided people like few others have been able to do of recent years, with few folk seeming to be in the ‘middle’.  I’m not going to go all snobbish like some, and say that if you do dislike the film you’re an idiot.  I do though think that if you can’t stand it one day, if you revisit it a few months later you may have a totally different response!

The Tree Of Life doesn’t even attempt to work like a ‘normal’ film.  For a start, it doesn’t really progress as a series of scenes like most films do.  Instead, it consists mainly of montages and fragments of scenes, in the way memory does, edited in as strange a way as possible. For most of its length, it seems to be about somebody remembering his childhood, but for about half an hour makes a digression and shows us the creation of the universe.  The whole movie tries to work in a different way, a way in which the story, images and ideas are not there to be automatically understood and digested but experienced.  Perhaps you ‘get it’, perhaps you don’t, but in some way the brain may at least partially work something out.  Before I start to sound all pretentious, let me say that that back in the 70s this kind of movie was quite common in cinemas, where directors as diverse as Andrei Tarkovsky, Alexandro Jodorowsky and Nicolas Roeg were making motion pictures of this kind, films that were pushing the boundaries of ‘normal’ cinema and trying to make viewers assimilate things in a different way.  The fact that The Tree Of Life, despite getting a very limited cinema release, did much better business than expected, hints that audiences would like more films of this nature.  Of course its director Terrence Malick, who has only made four films in fourty years and hardly ever gives interviews, has always had a mystique about him while his films get weirder and weirder!

The film opens with a mysterious light resembling a flame, which we will see again.  Then we have a few minutes of flashback footage, and you’d better get used to the way this bit is filmed, because all the flashback stuff is filmed like this, with strange angles and edits which break most of the rules of ‘normal’ filmmaking, but give proceedings a trance-like feel.   I personally love it when filmmakers find new ways to show and tell me things, but it’s understandable that many will get annoyed.  Regardless, the photography here is absolutely beautiful, though viewers of any of Malick’s previous work will expect this.  Also they will expect characters narrating their thoughts, and lots of shots of trees and the sun streaming in the gaps between branches, and they certainly get all this, along with the usual slightly oblique commentary on mankind’s relationship to nature.  The film soon switches to the present day though, and the gray, soulless, virtually futuristic buildings are a shocking contrast to the small town beauty that we have just been experiencing.  Again, the shots and edits are strange, but here deliberately uneasy, even menacing, as if we have just time travelled and are trying to get used to this brave new world.  Now I will say that the present day scenes with adult Jack consist of little more than him gazing at things and appearing to be deep in thought, and don’t really add much to the film.

However, we soon get to the creation section that appears to have caused many walk outs in cinemas.  For several minutes we are treated to nothing less than the formation of the universe, with trippy visuals that were created entirely without CGI [Malick got special effects maestro Douglas Trumball to come out of retirement to work on this film, though great use is made of real footage, such as the nebula sometimes known as The Eye Of God], then the formation of the Earth and eventually life.  None of this is shown in the way you would probably expect, with seemingly  random cuts to Saturn’s rings, or the inside of a cavern, but it all ties together in a montage of incredible audacity and awesome beauty the like of which is rarely seen in the cinema.  Why are we being shown all this?  Who knows, and does it matter?  I don’ t think it does.  The majority of the rest of the film is spent on Jack’s childhood, eloquently detailing his first experience of things like love and hate, and showing the family become increasingly fractured by the father’s dominance.  Malick refuses to let him become an actual villain though, even though we grow to intensely dislike him.  Throughout all this, Malick still emphasises montage over actual scenes, but truth be told, the second half of the film is a bit dull in places, and a few bits struck me as being pointless.  And then, in lieu of a climax, the film gives us an audacious sequence of fantasy rife with symbolism, religious and otherwise.  What does it mean?  I must admit, even I found it’s obliqueness too dense, and it’s interesting to note that Sean Penn has said that the original script was clearer and all the better for it.

So what is it all about?  What I think it’s all about might be different to what you think, but I reckon many people will see the film as, in some ways, Malick’s  2001: A Space Odyssey, an attempt to understand life, the universe and our place in it, though his approach is quite different.  Despite showing us the creation of the universe and peppering the rest of the film with bonkers images such as a house underwater, Malick grounds things in a strong human element which is almost sentimental and the antithesis of Stanley Kubrick.  The childhood depicted in the film is an obviously rose-tinted one, perhaps inspired by Malick’s own, but the emotions we are privy to are ones that are universal.  Some have mentioned a strong religious element which is maybe strengthened by the use of much religious music, and the narration is often restricted to questions, such as “are you there”?, possibly to some unnamed deity, but the film actually exhibits an atheist point of view in some things.  Mercy, though, is clearly an important theme in the movie. There is an early scene where a dinosaur [yes, there are dinosaurs in this movie] spares another dinosaur’s life, and later on Mrs O’Brien gives water to a convict, as in Ben Hur.  Then, quite near the end, Jack has the oppurtunity to kill his father, and I don’t think it is ruining things to say that he doesn’t.

I am aware that parts of this review are perhaps a little vague, but then so is the film. I haven’t yet mentioned the fantastic, immensely detailed performances by Brad Pitt, Jessica Chastain and young Hunter McCracken [Sean Penn seems rather wasted], and am probably not devoting enough time to them, but  in a year’s time, after a couple more viewings, I could probably write a review that is totally different.  I do hope, though, that I have shown that The Tree Of Life is something quite special.  It’s certainly nowhere near perfect [unlike, to my mind, Malick’s masterpiece The New World], and there are things that grate – the copious chorale singing, the relative lack of dialogue that, while commendable, often results in strange looks to try and transmit the emotion words would have illustrated, some dull sections in the second half.  And yes, the film is, without a doubt, pretentious.  Nonetheless, I can’t stop thinking about it, and it really is like nothing else out there at the moment.  You may love it, you may hate it, but it is what cinema is all about, and more should make films like it.

Though I didn’t like World War Z much, it was a huge hit so lots of people are no doubt looking forward the sequel. However, it seems that we’re going to have to wait a […]

Prepare for danger in this new clip from ‘World War Z’

With only two days to go before Marc Forster’s World War Z hit cinemas, you’d think all the clips would have stopped by now. Not so, and today we have yet another clip […]

World War Z is a zombie horror based on a novel by Max Brooks, and takes place ten years after a Zombie epidemic which almost destroyed humanity. The film picks up all over the world […]