Right off the bat, I want to tell you that I used to really like this movie. I used to call it one of the decade’s finest, enthusiastically throwing adjectives like ‘brutal’ and ‘uncompromising’ at it. Then I did something that can really make or break a film; I rewatched it, and in doing so all but slaughtered a lot of these happy memories. Sure, Eden Lake is not a bad film per se. The tale of a modern couple going for a holiday in the Lake District, and getting terrorized by the local youths, has some definite plus points. The pacing is flawless. The acting is very accomplished (particularly from the young Jack O’Connell who plays the ruthless ringleader of the tormentors, Brett) and the violence stays intense and gritty throughout without ever feeling like it’s too forced or that the director is revelling in it. Besides, any film that can make you actively route for some adults in battling a bunch of kids is doing something interesting with audience identification, right?

Not necessarily, no. That depends entirely on the kids they are doing battle with. Eden Lake is a movie that is fuelled entirely by bigotry and class prejudice. As our lovely middle class couple (Fassbender and Reilly) reach their holiday destination – accompanied by a conveniently thematically relevant radio show – they are instantly confronted with the most feral and feckless of working class families imaginable. There’s arguing in the streets, people slapping their kids and uncivilised hollers aplenty. This dichotomy of the polite middle classes vs. the beastly underclass continues as they reach their spot by the lake only to have their moment of tranquillity ruined by some young, and ASBO happy, members of the working class. How unfortunate! Before too long these young rapscallions flash their bits at them, steal their car and then eventually take it in turns to torture them. And to think the perfect gentleman was preparing to propose as well! And if you think the kids are bad wait until you meet the parents; ignorant, unpleasant and highly abusive. The message is loud and clear: fear the working classes. 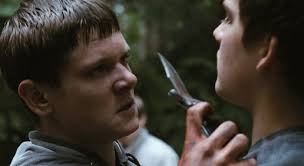 Now this complaint may sound like a double standard. After all, horror has always had a history of demonising poor people whether it’s the deep wilderness of Deliverance or the vast Australian outback of Wolf Creek. Hell, even the classic The Texas Chainsaw Massacre taught us to fear those with less than us. True, but the difference is that none of those genre pieces extended such stereotyping to the entire community. Leather Face and co live in the middle of nowhere, or at least far from the beaten path. The makers of Eden Lake can’t claim such excuses, and so the dominant source of fear appears to be an entire class of person and not just a few members of said group. Sure, the teenagers don’t openly embrace torture as an option until after the honourable husband accidentally kills an out of control dog (coming from a working class environment it is, of course, highly vicious). But even prior to the dog killing they do attempt to run them over, laughing in the process. And besides, Brett’s murderous love for his dog is entirely undermined by a bit earlier where we are shown him and his gang torturing animals for fun. All of this could have at least been lessoned had the writers included a small cast of characters that go against the grain, but we see very few exceptions to the rule. And those few that we do see switch to full murder accomplice mode the second some pressure gets put on them. Surprise, surprise; reactionary right wing rag The Daily Mail said the vigour with which the youths hunt, knife and burn their victims is ‘worryingly authentic’. True, the film’s not quite Fight For Your Life (1977). But then it was made 31 years later.

I’d like to say that the offensive portrayal of working class communities is the only bad part about the writing, but unfortunately the script is so based on coincidence that it’s hard to take it seriously.Eden Lake is another horror where the ridiculously evil bad guys cross paths with the blandly perfect good guys all the time, despite the visibly acres of forest. Reilly finally sees a route out of this cesspit only to find out the driver is related to one of her pursuers. And the entire end sequence where she finds herself on someone’s couch is so fast paced that you almost forget how truly far fetched it is. That and the protagonists’ collective stupidity goes beyond the horror standard with the narrative being strung together by a collection of errors in their judgement. A particular highlight is Fassbender trespassing in to the home of Brett’s inhuman father, when nobody is around, and then proceeding to look around the family house for a while. It is one of those typical horror moments where the characters do something that nobody would do in real life just to suit the plot.

Yet despite all this criticism I am still giving the film 3 stars. The truth is that beneath all the classism and scripting convenience it’s definitely not a bad piece of cinema. The director Watkins shows that he’s come a long way since My Little Eye, offering an experience that is visceral and involving and is willing to defy the classic conventions of the genre (even if, in the case of the ending, this can also be to its detriment). Indeed, you could do a lot worse than visiting Eden Lake. Though if you do, don’t take your social conscience with you, and be sure to take a massive bag of salt to have with it.

Not too long ago Ridley Scott’s Prometheus sequel was re-titled Alien: Paradise Lost, and a start date for production was confirmed for February 2016. The title has now changed once again, and for whatever reason, […]