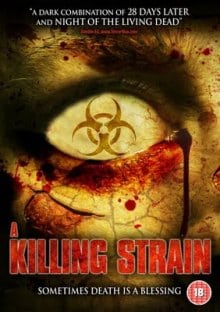 The zombie genre continues to thrive with films like 28 Days Later, World War Z and to an extent (Rec) delivering new and inventive ways to keep the genre alive, and TV show The Walking Dead has secured mass appeal for the undead. With its continued support from fans, the zombie genre is showing no signs of going away any time soon, and will no doubt flourish for years to come. Sadly though, when a genre is still at the top of its game (remarkable after so many decades) there will always be misfires and mediocre films to sit alongside the good stuff. The Killing Strain is not exactly a waste of your time if you love the genre, but it delivers nothing new and happily sits in a safe zone of delivering a zombie story seen countless times before, with no imagination and the entire idea seems a bit pointless really.

After an opening showing a scientist conducting an experiment and a dead person coming back to life, we already know that this will turn into an epidemic. When we meet David (Lagleder) and his wife driving across country desperately trying to hold a conversation amongst the poor production, we know that they are going to run into a zombie in the corn fields. We guessed that David would have to leave his now undead wife, and in case your an idiot, we knew that David would end up with a small group of survivors doing all they can to stay alive. It aint rocket science here, and The Killing Strain may have some clever music to create some impressive tension, but it has all be seen before bigger and better, which begs the question why. A low budget is no excuse: look at films like Colin if you need an example of how to bring fresh ideas to the zombie genre on a ultra low budget. But low and behold, The Killing Strain follows all the usual rules: the group is made up of David the level headed guy, a balshy loud mouth idiot and his girlfriend, another girl with issues, a geeky guy (because he has glasses) and the old lady who cooks and feeds them. They are holed up in a farmhouse, and spend pretty much the entire film there bickering and arguing about what to do, who is toughest, discovering a hidden underground bunker and shouting at the zombies outside. When the action hits, like a fight scene between big balshy man and level headed man, the choreography is painful and the editing is dreadful. The dialogue is often embarrassing and the characters are rarely engaging, and when there is no zombie action or tension, the film just kind of drifts and you might even forget you are watching it. The Killing Strain may sound awful, but it does have its merits. As I said the music works wonderfully in places to create tension, and there are one or two set pieces that might shift you nearer to the edge of your seat, if only for a moment. Some of the zombie action is quite well crafted considering the films budget, and even though the script is terrible, it might raise a few (un-intended) chuckles. This film is painfully mediocre, but not rubbish, and for zombie fans who have to have their zombie fix, the familiarity of the story and setting might just do the trick. For those who are a little more choosy with their horror, then it is probably best you give The Killing Strain a miss.