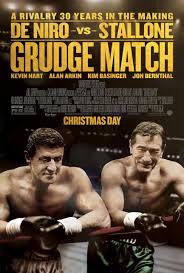 I doubt very much if I see another film in 2014 that made me sit back in awe!

Now before readers start to think that I am set to give Grudge Match a Five Star showing, let me finish.   You see, this is an odd piece of film making.   A weird vibe engulfs the film from the off and you just can not believe what you are seeing.   From the bad CGI effects at the beginning, to the obvious nods of previous films, this is a Rocky film but without the Balboa, its a deranged idea to have good old Sly play anther boxer in this case Henry “Razor”……and its the shadow of the Italian Stallion that hangs over the entire running time

Take the scene where Rocky…..sorry I mean Razor goes into a meat factory with his trainer and sees the meat hanging from the hook.  He goes to punch it, like we have seen him do many times, but then is told not too as they are only there to buy some, this follows a sly look to the camera by Sly to us the viewers.  Now some will call this a wonderful joke for fans of Rocky…..which would have worked if someone else apart from Sly was in the role.   For me personally I felt a slight unease at the whole show, its like the writers and the stars knew the joke they were playing, but for me, having loved every single Rocky film (and yes I include Rocky V), I just did not get it.   The humor on show seemed too desperate and sometimes insulting because lets not forget……despite the many sequels that stretched into good comic book fun……. Rocky the original is an Oscar winning film, so maybe a bit of respect is due not only to the franchise but also to Sly himself who portrayed an against all the odds hero to wonderful effect!

Or maybe I am just being a boring bastard!

Grudge Match tantalizes us with the promise of a Raging Bull Vs Rocky mash up which sounds brilliant, if it was made way back in the 80’s.  Here we have two stars slugging it out in the ring and to be honest its quite painful to watch.  To be fair Sly still looks good, and if the rumors of a Creed film with him returning to the role of Rocky is true, then he won’t look out of place.  Sadly Robert De Niro looks way off the pace.  He trims well for the final fight but its a hard slow slog watching the long awaited showdown as the punches are sluggish, the pace is dire and you really just want the trainer to throw in the towel after the first round even though the hints of brutality are a welcome surprise.

How did we get to this fight?

Well the beginning shows us the rivalry between both Razor and Billy “The Kid” McDonnen,  two fighters that hate other more so than past real life counterparts Benn and Eubank.  We see their early two fights from days long gone that is displayed with awful CGI, taken from snippets from Rocky and Raging Bull, in which both win one each.   The planned third  was supposed to be a winner takes all, global fight that every boxing fan wanted to see and which would have made the two fighters very rich, only for Razor to inexplicably pull out for no reasons given.

Thirty years later and Billy  is still pissed off.  His character now long retired and running a car dealership in Pittsburgh. While Razor has morphed into the character of Paulie from the Rocky films in which he has fallen on hard times and now works in a factory.  Again following the route of a Rocky film, this time think of Rocky Balboa, the two are tempted for one last hurrah despite both aging a combined age of over 100.

What follows is two hours of padding really where the film tries each genre but fails miserably.  The comedy parts are just not fumy (save a few decent wisecracks), the drama is weak (how can it compete against Warrior) and the action stakes are slow (what did you expect).   Grudge Match feels like a film that had an idea but once given the budget, was unsure which direction to take.   Take the final fight scene for example.   I was a bit shocked at how brutal the fight seemed to be!  Now that is a good thing, even though it took an age for the punch to land due to to the slow movement of the two, but still, the film peaked up from that moment.   But then the tone we were watching from that point was at odds from what we have seen.   Everything was light and cheery but then we were thrown into a punch up that probably warranted the 12a rating when at first we were heading towards a U.

Grudge Match could have worked if they took this as a serious drama about two past it boxers tempted out for one last fight, but then why watch something like this starring Sly when he has the last Rocky film on his CV which is an outstanding film in its own right.  Which once again ties down the problem of Balboa haunting every frame of this.

Its hard for me to pour such scorn at a film which stars many actors I like and which you can tell that everyone had a blast doing.   having a supporting cast like Alan Arkin is always a sure bet, even though we could have done without the sub plot of Kim Basinger’s character Sally who “had a child with the one but was in love with other” nonsense that is as poor as it sounds, even though it has to be said, good old Kim still looks good after all these years.

After the shades of nastiness during the final rounds,  it climaxes with all the predictability you expect from such a film and for a running time of over two hours, this is a bloated attempt by two stars who try to show they have got it but fails in many ways to achieve the knock out it requires.

Sly and De Niro are legendary actors in their own right and while its nice to see them trying to show age shouldn’t matter in films like this,  while the intention is there, a film without any decent originality or laughs was always destined to fail.

Relive past glories yes, but De Niro comes across more like a Gentle Rabbit than his Raging Bull and as for Sly, well he is more Rocky Bullwinkle than the man who fought and beat the likes of Clubber Lang and Ivan Drago…….

Only a brilliant cameo at the end for all boxing fans saves this from being totally utterly pointless…………
Rating: