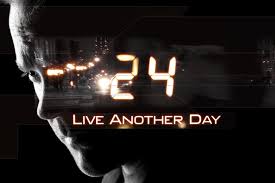 The last time we saw Jack Bauer was four years ago.

Chloe was crying at the image of him full of blood and battered blue, he said his goodbyes as he was now a wanted man, on the run for the rest of his life…..a poor reward for saving the world an amazing eight times.

After plans for a movie halted, fans of 24 were sure that we would never ever again see Jack Bauer in action, so when it was announced that Kiefer Sutherland’s TV Show TOUCH was being axed and he was returning to the role that has made him a world wide star….there was gasps of excitement from every fan.

Even the teaser trailer shown during the Super Bowl brought howls of ecstacy as we saw not only a brief sequence of Jack in action, but also he was once again teamed up with his super sidekick computer geek Chloe, because lets face it…..she is just as important to the show as Bauer is.

In the early hours of Tuesday morning, SKY viewers had a chance to watch the double header opening premiere at the same time as those in America and I was one of the 11000 watchers who stayed up until 3 in the morning….but the question is….. was it right to bring the ground breaking show back?

Lets face it, Day 1 and 2 are one of the best episodes ever show in America, day 3 lost its way a little as the writers tried their best to cram in all the popular characters, which didnt quite work and day 4 was more of a prequel to what Day 5 would bring….and what a day that was…..

Every fan would tell u that DAY 5 was the day that 24 will always be remembered for. A nail biting start from begining to end…..which resulted in a shocking twist that had fans drooling from their mouths……sadly because it hit so great heights…..the following days failed to follow suit. Day 6 is notorious for being too dark and same old, while by the time Day 7 and Day 8 arrived, the show had become stale, with fans guessing each outcome long before the twists emerge.

Even now when I watch what I thought back then was the last episode ever of 24,  I just can not help but feel underwhelmed by it all…..Jack needed a glorious ending….instead we had a whimper…..a final look back and then he was gone…..

So was bringing Jack back a good idea? 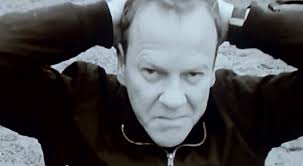 Jack is in London and he is wearing a hoodie? I wonder if David Cameron wants to shake his hand? I wouldn’t because the four years he has been away, Jack is now a hard cold bastard who has lost everything and has no one. The opening of this whole new day, saw him living rough until a massive fight scene gets him arrested and taken to the CIA Headquarters. All fans know Jack though and as he was caught, a wry smile appeared across his face…….the famous 24 symbol appeared and the countdown had began…..Jack caught? never! This was all a plan……but why?

Jack had nothing to say for 40 minutes in this opening episode (easy work Kiefer). Sat there like a mute, just thinking and looking like a right hard bastard. Not even that girl from Chuck and Dexter, Yvonne Strahovski who is now playing CIA Agent Kate Morgan  (Jack does like the Kate’s remember?) could get through to him, even though she was the only one with a bit of sense who kept on screaming to everyone who wouldn’t  listen…..”JACK BAUER DOESN’T GET CAUGHT!”….

While we waited for Jack’s true intentions….we had the filler of the rest of the plot. Good old William Devane was back as James Heller who was now the President of the United States, which meant of course so was his daughter Audrey Raines, last seen in a coma like state who just happens to be Jack’s long lost love….who Jack left way back in Day 6…..to complicate things…she is now walking and living a life……and is married to Mark Boudreau, the President’s Chief Of Staff……what is it with Audrey going out with guys who works with her father?

He of course finding out Jack is back….keeps it from his wife and vows to “vanish Bauer for good!”…..ooooh its all getting serious in London……

Then we find out the jist of what is happening!…..

Someone is doing a Tony in Day 7 and is hacking into things and causing mischief. This time a drone is overtaken by a mystery evil bastard that results in the murder of loads of soldiers which causes panic for Heller and our very own Stephen Fry who plays our Prime Minister…….if only!…..

Then Jack speaks……well speaks and kicks loads of ass……you go boy….damnit its good to have u back son. He got caught to save our very own Chloe….who judging by her hair style is a big fan of the books….The Girl with……as the design is uncanny….

The CIA are doing very bad things to our girl…so Jack is there to break her out and he does with a few moves and with the help of rocket launcher. But unlike before, Jack has an hidden motive in helping Chloe when it was revealed that he has discovered plans are afoot to assassinate President Heller on Foreign soil which if it did happen, would result in WW3……

So just another normal day in Jack’s life then……

The double header ended with a carbon copy twist of what happened at the end of the very first episode way back in Day One which every fan must have seen coming  (Hellloooo Mandy!!!)….. but then we had a fresh tiny twist at the end. It seems for the first time in 24 history we have a bad figure and that is of a woman……..about friggin time!…… Its London I suppose….home of girl power and Spice Girl shit……

So with all this happening…was it any good?

I am dismayed over the stuffy comments made by critics in America. If they actually thought that 24 was going too reinvent itself as a Breaking Bad style thriller then they must be batty as some of the plot twists that occur in this show. 24 is 24 and it will never change. Yes the series had become stale, with too much focus on CTU and too many moles……but the four year gap has done wonders for the show.

Being a die hard fan, I was hoping to be blown away like I was way back in the good old days and while Day 9 never quite reached that peak (so far), it was still amazing to see Jack back doing what he does best. Kiefer is simply breathtaking in the role. Bauer is very much an icon in TV History and too see him shooting, kicking ass and saying killer one lines makes the hair on my neck stand uo

The re-teaming of Chloe is must watch TV and as soon as she is in his ear telling him where the bad guys are, you knew one of the greatest TV Shows in history is back. Yes I was a bit put off see extra’s from EastEnders and Dream Team in some of the cast….but when the likes of Colin Salmon are popping up……you know there is quality in this show.

Cut down from 24 to 12 hours for this limited run. Even if this is the last time we get too see Jack in action, it will all be worth it. This already seems a step up from the dreaded days between 6 and 8, and even if does not quite reach the heights of Day 5…..the next 10 hours is going to be full of spilt screens, numerous twists and no doubt some undercover mole will appear which will make all fans go…..”Thought so………”

The final kill scene at the end of the second episode was very dark, even for 24’s standards so maybe this is going to be the most violent day yet and that really quite excites me.

Jack said he had no friends……..he lied…….he has a worldwide fanbase and we all rooting for him to save the day once more…….

Jack’s back baby…….and the world is safe again……well for the next 12 hours…….

TV: Welcome back Jack!!! Here’s the first teaser trailer for ’24: Live Another Day’

Fox has just released the first glimpse of a returning Jack Bauer in the below teaser trailer for 24: Live Another Day. As if the return of Jack wasn’t enough, Chloe is also in […]