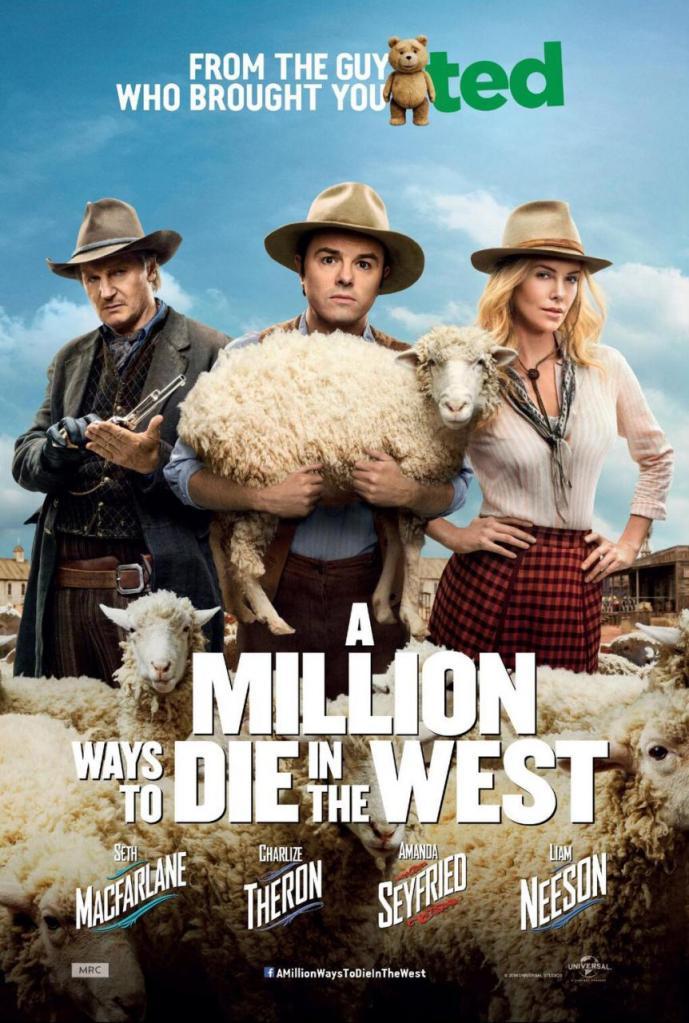 The genius behind Family Guy does his Blazing Saddles in his film debut as sheep farmer Albert Stark, who falls love with the wrong girl.   Expect duels and death in the only way Seth MacFarlane knows………

Its hard to believe that Family Guy was once axed by the studio.  Now considered equal if not better than The Simpsons (the show it tried to copy), the capers of the Griffin family has made a star out of creator and writer Seth MacFarlane who not only has hosted the Oscars but also gave the world the comedy hit TED, a film that not only won critical acclaim but struck box office gold.

Not only does A Million Ways To Die In The West becomes Seth’s second attempt at the big screen, but it also  marks his debut in front of the camera.  A starring role which will probably delight all fans of Family Guy as they finally get too see Peter Griffin in the flesh.

So with no added pressure on the man and with a fanbase willing and waiting to laugh once more, how does the film fare?

From the off the tone is set.  A duel see’s an oral sex gag hit the screens followed by crude jokes and then more sex gags.   This is a kind of routine that sets in for nearly all its 2 hour running time. Seth plays a coward sheep farmer who after managing to talk himself out of duel, loses his girlfriend Louise ( a hardly used Amanda Seyfried) to the man with the moustace Foy ( the always brilliant Neil Patrick Harris).  When he saves the beautiful Anna (Charlize Theron) in a bar fight, love blossoms between the two, but unknown to him….she is already married to the evil Clinch Leatherwood (Liam Neeson) and he doesnt take kindly at his wife playing around.

Being a huge fan of Seth, I had to watch A Million Ways To Die twice.  The first time I knew I really wanted to enjoy this movie and perhaps I tried to hard too laugh at the jokes and be seduced by the vulgar tone.  Also and if you do not know ( and you lucky)  there is a stuning cameo halfway through that made my geek levels go overdrive and shout “YYYYYEEEEESSSSSS!!!!!!!!!!!!!!!!!!!!” at the screen.   Its probably my favourite cameo of all time and its one that should be cherished by many fans all over –  well done Seth for pulling it off.

Apart from that stunning moment, the second time of watching this comedy I began too realise what I honestly felt deep down the first time I was watching but failed to admit…. that its actually not that very good of a film.

Seth blunders by giving his character all of the screen time when in fact its those around him that are crying out for material.  Harris is wasted yet steals every moment with his raised eyebrows and the likes of Sarah Silverman and Giovanni Ribisi deserve better than the couple who dont have sex despite her being a prostitute, simply because they have to rely on the same sex gag over and over.  Its funny first time Seth….but the second and third time???

And that is the majpr trouble with this film, every joke which you laughed at, gets repeated over and over.  Its like its being directed by the South Park duo and they just copying their “Who Killed Kenny” gag because A Million Ways To Die feels so repetitive after a while that its a real bad sign, especially as you looking at a running time of two hours.  The title itself is like the “Kenny” gag as we get a few scenes of innocent people getting killed in vicious ways, its quite funny, if the trailer itself hadnt spoiled one or two of these scenes.

For a film whose tone relies on Vulgar gags, its the romance between Anna and Albert that shines through and suggests a “What could have been!” as the chemisty between Seth and Theron sizzles at times and you look back when the credits roll and hoped that we had more of the soft approach between them both than the need to fill everything full of sex and more sex gags.

The direction by the writer though is first class, it looks and feels like a western and the score booms out which suggests that somewhere inside is a good old action film crying out from this man.

Sadly though its not here as by the time Neeson rides into town, we are hoping for a proper western shootout but like the overal film, it promises a lot but fails to deliver and it limps out with a whimper that will leave most fans thinking “is that it?”

Seth is a likeable man with a huge talent, sadly this ambitious attempt fails too tick all the boxes but with TED 2 coming next year and with Family Guy still going strong, he wont be too disappointed by this failure as he seemed to be having fun in it, its a shame we dont enjoy seeing it and as for now,  the masterpiece Blazing Saddles can safely keep its cowboy hat on and declare itself as the ultimate comedy western of all time.

TV spots! New trailers for ‘Transformers 4’, ‘Edge of Tomorrow’, ‘Hercules’ & ‘A Million Ways to Die in the West’

I have a number of pretty sweet TV spots to show you today, so let’s get right to it shall we? First up is an impressive new TV spot for Transformers: Age of Extinction, […]

It’s a big week for Family Guy and Ted creator Seth MacFarlane’s new comedy, A Million Ways to Die in the West. Earlier this week came a collection of character posters, and then some […]