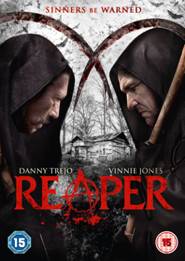 A young woman hitch-hikes her way to California but along the way intends to make herself a bit of cash from the strangers she encounters. It isn’t long before she finds herself in a sticky situation at a hotel she’s taken to. But that isn’t her only worry, as a deathrow inmate has escaped execution and embarked on a murder spree, with his sights set firmly on the hotel as his next place to wreak havoc.

Part road movie, part crime movie and part horror survival with a hint of sci-fi, REAPER is a fun yet flawed B-movie who’s characters and performances are more interesting than the actual plot. The plot itself is meant to focus on that of the Reaper, a cult leader who’s managed to escape the electric chair and now wields special electro powers which he uses to shock his victims. However, the Reaper appears briefly once a third way through the movie and then at the end, with a lame storyline that is too silly to comprehend. The more interesting plot lies with the confident young woman (Shayla Beesley) who goes by many names include Sheryl, Sarah and Natalie. At first we think she is a defenseless young woman being preyed upon by a horny, drunk salesman Bill (a fab Jake Busey) who gives “Sheryl” a lift. But it soon turns out that Sheryl is more than capable of defending herself and is actually the one doing the hunting, as it were. This choice of career puts her on the same road as Brad (James Jurdi), a gangster deal maker, and Jack (the brill Danny Trejo), a drug supplier. Brad’s path is set into motion by his boss Rob (Vinnie Jones) who’s giving Brad his final chance to broker a deal after he screwed up the previous two. But are any of them a match for the Reaper?

The Last Chance hotel is also one of the stars of the film in its own little way. The hotel, much like Psycho’s The Bates Motel, is home to a creepy receptionist named Caine (Justin Henry), who’s religious talk and peak cap eblazoned with the word ‘Repent’ should have been enough for the characters to think twice. With cameras located in each of the hotel rooms, there’s always a feeling of something much more sinister occuring inside the hotel besides the Reaper, but unfortunately there isn’t. The hotel acts as a prison for the film’s survival scenes to take place and in that respect it does a decent enough job.

Despite Danny Trejo and Vinnie Jones’ hooded images adorning the DVD cover, neither Trejo or Jones appear in a cape or hood. That costume is solely reserved for the Reaper in what little is shown of him amidst the electrical CGI SFX. The Reaper is meant to be scary but unfortunately he has as much menace as a fluffy kitten, with only his past crimes, for which he was sentenced the death penalty, the most frightening aspect.

REAPER isn’t bad, but it isn’t good either. Thankfully it’s crime narrative and the performances from Busey, Beesley, Jurdi and Trejo make it an entertaining watch of sorts that will pass an hour.

Bad Ass, directed by Craig Moss and starring Danny Trejo, was a film no one actually thought was real. There were rumours of a film being made based on  a Youtube clip where one trouble […]

I missed Machete Kills at the cinema, and even though it has become one of the biggest flops of all time, I can’t wait to catch it on DVD or Blu-ray. I believe […]