FROM DUSK TILL DAWN
Season Two

After being turned into a culebra (serpent vampire) by the seductive demi-goddess Santanico Pandemonium, Richie Gecko heads to the U.S. with his new love to take down one of the nine lords, Malvado, who enslaved and kept her prisoner at the Titty Twister. Still in Mexico, Richie’s brother Seth and pastor’s daughter Kate Fuller are struggling to make ends meet with their small scams, flitting from town to town. Struggling to cope with the loss of his brother, Seth turns to the comfort of drugs whilst Kate does everything in her power to support him whilst she tries to secure enough funds to find and help her adopted brother Scott who too was turned into a culebra at the Titty Twister bar. Their paths, however distant, will reunite as they each fight for their own agenda.

The television adaptation of Robert Rodriguez and Quentin Tarantino’s vampire horror FROM DUSK TILL DAWN retuns in this second series which officially begins its own path after the first season practically retold the original movie with a few additions here and there. One of those additions was the introduction of Texas Ranger Federico Gonzalez who returns as the tortured soul who must do what he can to keep his wife and baby girl safe from the threat of the culebras whilst keeping order between them. With Santanico intent on killing the powerful lord Mulvado and her once loyal servant Carlos keen on sabotaging her plans, it’s up to the ranger to pick a side. 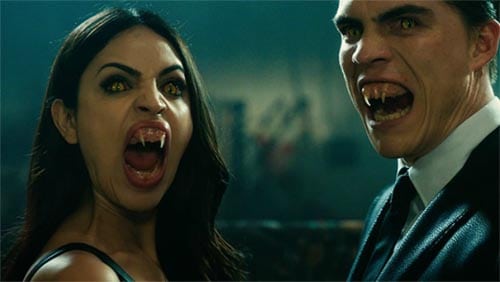 New characters are also introduced in the second series including a familiar From Dusk Till Dawn face in the form of Danny Trejo. After playing the bartender in the original movie, Trejo stars as The Regulator. Under the power of Mulvado, The Regulator is sent to track down Richie and Santanico to bring the latter back to her master Mulvado. Anyone who gets in his way who can provide important information is often dealt with in the most fatal of ways with their eyes and ears torn from their flesh and consumed to give The Regulator the power of sight or sound of which the original owner of said senses once bore witness. Wherever the Gecko brothers go, it always seems they’re being hunted down by one individual or another.

As far as the characters go, Season Two seems to improve upon the first series and this is probably down to the characters now having a story of their own to work with rather than rehashing one horror fans are already familiar with. That’s not to say there aren’t issues, because there are, but I seemed to care more about the characters this time round. Jake Busey as Sex Machine, for instance, is a much more likable persona in the second series with a more rounded character than we have previously seen. Seth Gecko also seems to overshadow his brother in this series too with the more interesting plot threads given to him whilst his brother Richie is off to fight for the top place of the food chain. As a whole, the characters have more to do this season though the story does seem to struggle with incoherence due to its indirect, backstabbing plotline that reminds me of how the Pirates of the Caribbean sequels ended up. When you complicate stories and have too many threads going on, it waters down the impact of the story which is certainly true of Season Two. Simplicity works, or at least dealing with one thing at a time, but unfortunately there’s that much going on in this series that it’s hard to pin down what the hell is happening half the time.

FROM DUSK TILL DAWN is without a doubt a step up from its first season, even if we do miss the brilliant Robert Patrick as Jacob Fuller, but it feels as though it’s holding back somewhat. The script, characters and story have all seen improvements but I feel the direction the series is heading is hardly unmissable. Though lacking serious bite, fans of the movie and casual horror fans will find something to enjoy here with its blend of vampire horror, criminal heists and eye candy, just don’t expect too much from it.

Danny Trejo and Vinnie Jones will face ‘The Reaper’

Could you wish for a better pairing of tough guy actors? The awesome Danny Trejo and Vinnie Jones are teaming up for a new horror film called The Reaper! Trejo is beloved in the […]

Now come on, apart from the over the top violence, Danny Trejo as Machete himself, the witty one-liners, the slapstick comedy, Charlie fucking Sheen as President and Mel Gibson as the villain, what […]

A VOODOO POSSESSION (2014) Written and directed by Walter Boholst When his brother Cody, a doctor in Haiti, goes missing, Aiden Chase travels to Haiti with his ex-girlfriend and news reporter Bree and her crew […]