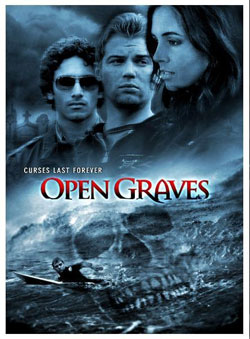 There is this cop in this right that is dead hard!  No serious!  Too prove he is one damn hard nut, he walks around with a cigarette hanging from his mouth and before he speaks, he needs to take a long hard drag from it before blowing the smoke from his mouth.  He does this a few times, just so us the horror viewer realises that he is one cop not to mess with.  He also, after taking a puff, speaks in a slow growl tone, one that can only suggest the inner anger from within.  This cop is also the brains of the entire force.  One that all fellow officers look up to in the first port of call.  How he manages to get such a wonderful reputation is shown in the first scene, when a body is found on a beach….its skin taken from its body in a gruesome manner.  All other cops look around, confused and frightened and what they are seeing, then he turns up….takes a look, a fellow officer asks…..
“what have we got sir?”….
A drag from the cigarette and a look up he replies……”It looks…..like…he…has as been….skinned!!!!!!!”

Open Graves is one of the daft horrors on the market.  But having seen so many bad horrors this year,, it did quite scrap the barrel and drive me insane like poor Matt who warned me in the HCF office not to even attempt to watch what he described as a “a pile of shit!”.  But then again this is a mate who suggested to me I should watch Bitch Slap and having watched the first ten minutes, I do not now either to call him a racist pig or hug him for suggesting such filth!

Anyway, Open Graves is a horror version of kiddie flick Jumanji and considering its been a while since that late Robin Williams film, that its surprising how long it as taken for a horror film to grab that that plot base.   But then anything that happens to these poor people on here is nothing considering the thought of  Williams jumping from a board game and punishing you to watch Patch Adams on repeat showing!

Here we have the lovely Eliza Dushka who despite having such a fan base thanks to Faith and Echo, two characters from the world of Joss Wheldon, somehow gets it all wrong in the movie world.  Here she meets a bunch of new friends on the beach, who have just happened to get their hands on an ancient game whose myth around it says whoever wins the game, gets a wish that comes true.  The others will die the same way as the cards suggest.  Not believing in any such thing, they play the game and of course deaths start occurring!

And that is it!  In between the mire there is a suggestion that the film has some intelligence.  The one death scene involving a beautiful woman and a photograph is quite ingenious and a stand out from the utter predictable plot that surrounds it….

Some of the acting is woeful, Dushka the star is underused, and the CGI is poor.  The use of a dragonfly, crabs (I kid you not) and snakes brings out the worst of the aspects of the movie and maybe just the die hard fans of franchise Final Destination will find some joy as many of the set up follows that blue-print!  Other than that, its a routine horror that is full of dullness and any one who we is actually surprised by the “twist” ending really needs to see more films….as sadly its predictable has everything else that is on offer!

OVERALL: Fans of Eliza will probably want to take a look, but what they find is one board game that belongs in the reduced sales range……

SECRET OBSESSION Directed by Peter Sullivan This review contains spoilers that are in the trailer Netflix films are a very mixed bag, with arty movies like Roma, or exemplary thrillers like Gerald’s Game and The […]

TV: Extended promo trailer for Stephen King’s ‘Under the Dome’ will trap you

We have seen a number of short teaser trailers for CBS’s TV adaptation of Stephen King’s Under the Dome, and now finally we have a full length trailer to show you, and it is […]