This is not what I was planning on writing about. I was a few hundred words in to a review for the found footage pedo-horror Megan Is Missing (which I would sort of recommend – but that can wait til later) when I stopped what I was doing to watch The Beast Must Die. Thirty minutes in to it I decided Megan can wait until later. You see, before it was even half way through, I was so convinced that everybody should to see this movie regardless of little things like my promises to site admins. So this brings me to what is bound to be your first big question: is it any good? Not really no. Simple as that. But see, this is the point where the difference between movies and films come in. Whereas Megan is Missing makes for a fairly sincere, albeit heavily flawed, attempt at a horror film, The Beast Must Die is a shameless and glorious success in offering an escapist and silly, but immensely watchable horror movie. Be warned, this is not a horror to take you fearfully in to the night, though nor it is one you can watch with an air of smug superiority about you because as dumb is it feels, it is above all very good fun.

Amicus studios offer you a murder mystery with a difference. While The Beast Must Die offers a fairly typical Agatha Christie style country estate setup (with the obligatory no way out scenario), the comparisons end there. Instead of Poirot popping along to solve another murder, the host has brought his guests to the house under the knowledge that one of them is guilty. But of murder or some sort of elaborate fraud? No, instead the host Tom has gathered his guests all together because he knows that one of them is a werewolf. Are you tempted to see it yet?

If not then you’d do well to ignore the rest of this review.

For those still with me, how Tom knows one of his guests is a wolf never really gets touched upon. He just knows. As such, cue lots of remarkably straight faced conversations on the topic of our lycan friends, a couple of clues chucked in here and there and a very endearing ‘werewolf break’ where the movie pauses for 30 seconds so viewers can talk amongst themselves about which suspect is keeping a deep secret. Will you guess right? Probably not; the script takes a few liberties to mislead along the way. Furthermore, don’t except the slueth in you to have their work cut out with  a labyrinth of complex motivations. But will you have fun along the way? I would certainly think so. The tension gets higher than it reasonably should at points, with the sheer ridiculousness of the situation being combated by how gravely the characters take it. As with the show 24, they take it seriously so you don’t have to. One particularly memorable moment sees a Thing-esque set piece of the guests all putting a silver bullet in their mouths to see who is forced to let our their inner beast first. 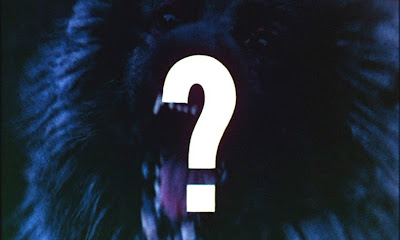 And it’s not just the horror element that’s fun. The movie is also stacked full of very 70s looking action. At points our host, Tom, will be hunting the wolf with a rapid fire machine gun from a helicopter. At others he will make said helicopter explode via his utterly inadequate shot. There’s wolf vs. man, man vs. woman and even a car chase along the way. The incidental music is also entirely at odds with the all too moody and morbid atmosphere that most murder mysteries revel in, giving jive where it should be strings. Most of it has no place in a werewolf movie, and should it be released for the first time tomorrow then critics would rightfully tear it to shreds. However, given the flairs, leather jackets and the plot’s general ridiculousness then it fits right in.

I’m aware that I maybe run the risk of looking like I’m being insincere here, or ironically excusing a bad piece of cinema, but I assure you that’s not the case. Given the premise of the movie it would be so easy for it to fall in to the kind of predictability and humdrum that makes almost every one of the numerous modern Asylum or Corman oversized animal features so ultimately underwhelming; sure they always look fun from the premise, but how many would you watch twice? Instead of the postmodern approach of knowingly being left-field, to make something that people will call ‘amazing’ between shots of spirits, The Beast Must Die simply is something out of left-field. And all the more fun for it. This distinction may sound petty, but it makes for a large difference. So get some friends round, don’t drink enough that it distracts you and have a great time sussing it out. While you do that I’ll get around to finishing my write-up for Megan is Missing.