If you are familiar with The Asylum, or any of the cheaply made monster movies with terrible effects, ludicrous plots, childlike scripts and baffling brilliance, then you already have a good idea what to expect from the one and only Sharknado. If you are new to this genre of film, then you have picked the perfect place to start!

Shark Attack 3 used to have the crown for the ‘best worst movie ever made’, but Shark Attack 3 can go and take a run and jump right into the awesome force of this Sharknado, and accept defeat. The best worst movie ever made has a new king, and that is the absolute brilliance of Sharknado. I have seen my fair share of crappy B, or what I like to call, Z-movies, and the one with the sharks in the tornado is by far the best this amazing genre has to offer. I have never had so much fun watching a monster movie, and I have never seen a cast so excited to be part of something so horrifically bad. Hats off to director Anthony C. Ferrante for upping the ante on these types of films, and it will take something very special to reach the heights of greatness we have on offer here.

The film opens with a fairly wasteful scene that see’s a dodgy Japanese businessman buying shark fins off an even dodgier fisherman. We have no idea how they came to be all the way out in the middle of the ocean, and quite frankly, I couldn’t care less. They argue over money, guns come out and suddenly sharks begin landing on the boat, eating the crew, the Sharknado has arrived! 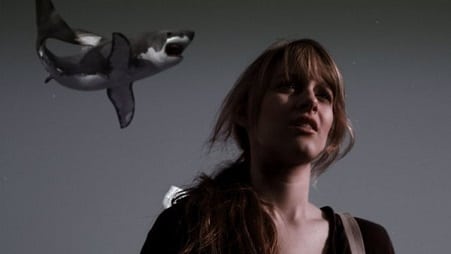 We quickly jump into the usual cheesy credits before heading to a beach in L.A. In true Asylum style, we perv at the ladies in bikinis as we follow two friends heading out for some fun in the water, one of the friends is Fin Shepard (Ziering) and he serves as the films hero. We watch a hot Chinese girl put on her wetsuit twice before sharks begin swimming up to the beach, and panic sets in.  The Chinese girl attempts to swim frantically away, but every once in a while stops swimming and appears to have forgotten what she is doing, and looks to be drowning instead! She is chomped and killed and that is the end if her. Hilariously, Shepard waves his arms around like a madman, yelling “Sharks” and telling everyone to “get out of the water!!!” Problem is, at this point he is the ONLY person in the water, and I found myself yelling at HIM to get out of the water instead. The hilarious scene calms down as the sharks sod off, but even though all is calm in the water, and only a small number of people appear to have been injured, everyone on the beach proceeds to run up and down, and up and down again screaming at nothing, while are hero attempts to nurse his friend, and contemplate what is going on. Now, all this happens in the first ten minutes, so there was me thinking that the film could not possibly keep up this momentum of brilliance for a further hour and ten minutes, but boy was I wrong. Within two minutes a freak storm hits a Santa Monica pier where tough as nails waitress Nova (Scerbo) works. She has a history with sharks, and while at first she won’t explain the scar on her leg, she later reveals it to be from when she was a child and she was out on a boat and sharks attacked. Her Grandfather was killed, and she tells us that “six men went in the water, she survived, the sharks took the rest”. A clear fan nod to Jaws, as is a gas canister in a shark’s mouth which is blasted open. A nod to Jaws, a homage, but never once is this film claiming to be in the same league as Jaws, it merely gives respect to its existence. So back to the pier, and boy if you thought the opening scene was awesome, wait till you see this! Sharks everywhere, a massive big wheel rolling and causing havoc and humans battling sharks! Nova kills one with a snooker cue, George (Heard) uses his trusty bar stool “don’t ever make fun of my stool again!” and all hell breaks loose, and the film keeps up this momentum ALL THE FREAKIN’ WAY THROUGH!!! Sharknado is astonishing in its sheer ambition to deliver something we’ve seen a million times before, but never quite like this. The cast are absolutely loving it, and churn out their cheesy lines with some serious intent: “My Mom told me Hollywood would kill me” says one chap, followed by the Hollywood sign landing on him, or better still a character gets attacked by a group of sharks and dragged into the rushing waters, and his cries for help? “On no! Ouch!! Get off of me!!” Brilliant! There is even some rather sick one liners as the waters turn red after an attack and one onlooker shouts out “looks like it’s that time of the month!” Now come on, has this film got no shame? Apparently not, and the carnage, chaos and awesomeness continues! A massive wave hits L.A, but continues to do so for the rest of the film, and as city streets are plunged under water, the sharks move in for the kill, and no bastard is safe, let alone continuity, structure of the film or even minor believability! A Tiger Shark (Nova knows this because she watches Shark Week!) swims under their range rover, but how is another question! The water under the vehicle is some two feet deep, but somehow this shark has swum underneath, and then does nothing. Later on Shepard saves a bus of school children from the raging waters as he abseils off a bridge. In one shot the bus is immersed in water, yet when the camera pans back for a wider view, we can clearly see the roads are totally dry with normal cars driving as if nothing is happening.  There are also incredibly silly decisions that will cause you, the rewarded viewer, to laugh out loud at the madness of it all. A man is literally swallowed by a shark, but his friends decide to grab his leg (hanging out the sharks mouth!) and pull him to safety. We all know that all they will get back is his leg, but they carry on regardless, and that is what makes Shakrnado so much fucking fun: it simply does not care about how things should look, and should play out, and it says sod off to plot, script of fancy storytelling. It is called Sharknado because it features a tornado with sharks in it, and if for some bizarre reason you expected anything else, then shame on you! The chaos never let’s up, and the scenes of total crapness continue to blast their way onto your TV screens with the sort of urgency as if this was the last film to ever be made. The storm comes and goes as the filmmakers please, with one moment rushing winds and water everywhere, and the next minute, calm. Sharks land miraculously on almost every helicopter pad on every skyscraper, and the windows to our heroes car magically turn white during the scenes inside the car! The sharks themselves are some sort of special land sharks, with the ability to fly, swim backwards and land on their prey when falling out of the sky. Hell they can even catch their prey in mid-air while a ferocious tornado flings them everywhere! Oh man, there is so much good stuff to talk about, so bloody much!

I feel I should stop (I could be here all night!) but I simply MUST mention my two favourite death scenes of random victims. The first is the man who gets crushed by the collapsing big wheel: as the monstrous wheel rolls towards him, the man suddenly loses gravity and tries to run but instead just kind of floats. He turns, lets out one of the funniest screams of the year and snuffs it. Later a woman in an airplane hangar inspects the ceiling as the storm rages outside: looking up at the ceiling above, the tornado pulls her through the hole in the ceiling. Stiff, and looking like a plastic toy, her exit is classic. Sharknado is awesome, and if you watch it and get very very drunk at the same time, it will become classic. Where else will you see a man waving a chainsaw about, gets swallowed by a flying Great White Shark and then cuts his way out! This is quite possibly the most fun you will have all year, and without a doubt THE best worst film ever ever made! Roll on the sequel!

Time to celebrate! ‘Sharknado’ heads to UK TV next month!!!

Brace yourselves people, for The Asylum’s Sharknado is coming to the UK’s SyFy channel in August! The most Tweeted film of the year, and a “social media phenomenon”, Sharknado will air on the […]