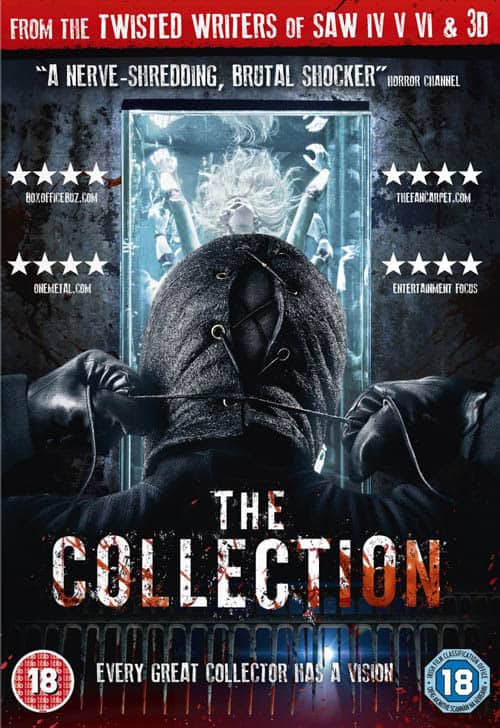 WHAT IS IT ALL ABOUT!

From the writing-directing team Marcus Dunstan and Patrick Melton (Saw IV, V VI and 3D) comes The Collection, a suspense horror film with nonstop thrills at every turn. Directed by Dunstan and starring Josh Stewart (The Dark Knight Rises, The Collector), Emma Fitzpatrick (The Social Network) and Christopher McDonald ( Boardwalk Empire, Requiem for a Dream), the film centers on a traumatized man forced to help rescue a beautiful woman who has become the latest obsession of a crazed killer who collects humans in a booby-trapped house of horrors…..

Despite it being more or less a box office failure and a few big rewrites due to the fact that it was originally going to be a SAW prequel, 2009 saw the arrival of The Collector, a horror that may have flopped big time but has grown in popularity on DVD.

Brilliantly staged, with each scene dripping with tension, it was a kind of horror that deserved to find some love, especially as they created an all new boogeyman to drive fans wild with excitement    Thankfully, following the likes of Shawshank Redemption, The Collector came to life on dvd. Massive word of mouth caused huge sales and added by critical acclaim, the studio were stunned by the demand of a sequel and so four years on, it arrives in the shape of the cleverly titled The Collection, a straight to DVD offering that the makers hope appeases those who wanted it badly.  But is it worth the wait?

For those not in the know!  The original saw an unlucky burglar break into an house only to find each room filled full of traps, the family tied up in the basement downstairs and a gimp like evil mother bastard who I suspected was actually Kevin from the Home Alone films.   Years of being abandoned by his parents and left on his own has caused a mental breakdown and now he goes into people’s homes, fill each room full of traps and enjoys the tortue.

Being such a huge fan of the original (I thought it was better than any of the SAW films),  I had high hopes that The Collection would delight my horror senses and while it was great to see the evil bastard back, the sequel suffers badly as it fall’s into the same path seen countless of times by other films.

Ever since Ripley led a team of marines back to that face hugging A L I E N planet, most horror sequels like to follow the blueprint, you only got to look at The Descent PT 2 and see how dumb the idea  of ” lets go back!” does not really work anymore.  Here we see the returning Arkin (Josh Stewart) suffer the same fate!  Having survived and lived through the chaos of the original, he finds himself back in trouble when a gang of mercenaries led by Lucello ( Lee Tergesen) drags him to the home of “The Collector” to help find a missing girl Elena (Emma Fitzpatrick).   What follows is nothing more than a bigger, more gory, more deaths storyline that is watchable but totally misses the simple tension approach that made the original such a thrill ride.

From the off, you can feel the different tone because we have a bonkers set-piece involving a rave and The Collector playing his little game.   Its a brilliant imaginative set-piece that ends up with body parts flying at the camera and while this is great for the gore-hounds,  it makes the film now seem more like SAW than it should.

The original worked because it was all set in one house with only a few characters and poor Arkin trying his best to save them by going from room to room.  It made you feel claustrophobic and sucked into the whole messy caper!  Now the whole universe has been expanded, it feels sort of like any other film of this nature, it has lost its very essence that made it so different and special!

The Collection is not a total dud!   The lead bad guy is such a wonderful creation and with a gory imaginative kill every five minutes, the film flies by, even though it offers nothing in the shape of character development.

What saves the whole show is the final five minutes.  I and probably many others were expecting a different climax, but the film gets turned on its head thanks to a brilliant last scene that somehow brings the whole two films together in a wonderful way and should end any hope of a third film called  The Collected.…..

Losing the simple approach of what made the original special is why The Collection is a good follow up, but does not quite live up to the high expectations many probably wanted, but despite all that, its still much better than most of the horror films that get released in the big screen these days………..