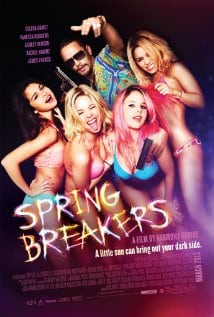 Harmony Korine’s Spring Breakers can be viewed as two completely different movies depending on the audience. Some may see it as a glorified soft porn movie about partying and all the highs and lows that come with it, while others may see it as a deep, spiritual journey of looking for something that can never be found. Those who saw it as a party film have complained that the film is boring, and one of the worst films of the year, while those who saw it as something much more under the surface have hailed it as a minor masterpiece.

I took from the film the deep, spiritual journey, and even though I would not go as far as to call it a masterpiece (or even a minor one), Spring Breakers is a very good film which has clearly divided opinion. From the opening montage of bikini clad girls, slo-mo camera, drinking, banging music and sexual invites, Korine makes damn sure you know that this film more than earns its 18 certificate. Throughout the film the camera acts like a pervert, getting up close and personal with the ladies and filming from angles normally reserved for porn films. When we meet the four main girls in the film: Faith (Gomez), Candy (Hudgens), Brit (Benson) and Cotty (Korine’s wife Rachel), it doesn’t take long for the camera to slither all over their half naked bodies like some sex crazed octopus. The girls are attending a religious school, but are desperate for something more, and we watch as they clamber all over each other in the hallways of their dorms. Wearing nothing but t-shirts, pants and trainers, the camera closes in for shots which are both hugely uncomfortable, but highly arousing. This is how Korine intends to show us the innocence of these four girls who have never been to Spring Break, but are desperate to experience it. Their sweetness and innocence is taken away by harmless fooling around, and a camera looking in where it really shouldn’t. We soon learn the girls do have a dark side, and they will literally do anything to get to the Spring Break party. While Faith is troubled by their dedication, the girls put on masks and rob a diner, and head to the ultimate party. At Spring Break they get drunk, do drugs, dance, tease men and have a good laugh, and eventually meet the brilliantly insane Alien (Franco). He employs the girls to quite literally live the high life with him, and he is very open about his dangerous side and dodgy dealings. A hilarious but disturbing scene see’s Alien literally singing about his weapons, money and all the bad things that he is. Declaring “I am bad!” with his gold teeth and psychotic smile, this is a strange experience indeed, and Franco is clearly having a ball. Not a lot happens plot wise: there are some turf troubles, the girls get arrested, they boast about their previous robbery and pretty much spend the entire film wearing hardly anything, but there is tons of substance. Korine spends an awful lot of the film repeating scenes or dialogue to almost hypnotize the viewer. Scenes often play out while catching up with another scene, and Korine employs flashback and flashforwards to confuse and dazzle in equal measure. The girls ponder, think back about how they got here, and often read out letters they may have written to back home. It is a philosophical and spiritual observation on the American Dream for the MTV generation. Parties, drinking and sex is all they want, but at what cost, and does finally getting to Spring Break really deliver what it promised? The questions are not answered, and we the viewer are left to think about the consequences and final moments for ourselves. We too are caught up in the haze of booze, boobs and bravado as the films almost dreamlike quality makes us feel like we are high with all the characters. The non-stop relentlessness of the soundtrack, the constant display of naked bodies, booze and drugs, the drunken observation talk and the spiritual depth to the girls thoughts and Korine’s often genius shots all add up to one hell of an experience.

Spring Breakers is not your average party film, it is far too arty for that, it is a deep, frightening display of just how easy the youth of today get caught up in looking for the next big thing. Spring Break is not the be all and end all, it is just another attempt at youth having something else to remember, something else in their life which they can say “I was there”, something to look forward to again, something to work for. Korine has masterfully portrayed a lost youth looking for something to make them feel alive, and in this case, Spring Break is it, and no matter what the cost, these four girls are going to enjoy it. We, the viewer, are simply along for the ride, but it is a fun ride while it lasts.

Th amount of press the Seth Rogen and Evan Goldberg created comedy, The Interview, has been getting of late, Sony had a guaranteed box office hit on their hands, regardless if the film was any […]

God’s too busy to stop Michael Shannon as ‘The Iceman’ in intense, action packed new trailer

After yesterday’s exciting announcement by Lionsgate that director Ariel Vromen’s new thriller, The Iceman, will arrive in UK cinemas on 7th June, a new trailer has also landed. The new trailer has a […]

I really enjoyed Hotel Transylvania, and I can happily admit to being very excited about the sequel. The first trailer has just landed, and it looks great. The first half see’s Dracula teaching his son […]