The Conjuring is one of the most talked about and critically acclaimed horror film of the year.  Fans have lavished the ghost flick for being the ultimate fright fest, a golden thrill ride for any horror fan to be scared throughout the entire running time.  There weren’t many horror fans out there who didn’t like it…..

The Conjuring left me cold, I explained my thoughts right here https://horrorcultfilms.co.uk/2013/08/hughesy-tells-how-the-conjuring-has-ripped-apart-the-office-of-hcf-overhyped-or-a-modern-classic/, and it was an article that shocked many fans who love this film site because I was one of the minority who refused to jump on the bandwagon.

Now I am at it again and I am writing this knowing that I am set for a bit of a backlash because having watched it finally last night, I believe Insidious: Chapter 2 is a much better film, in fact I go one further and say its possibly the most underrated horror films of 2013, a sequel that I believe even surpasses its original.

(Hughesy can hear the gasps from the readers as he types).

Why?  Well let me explain!

I was never fussed on the original Insidious to start with.  The first half hour was heading towards five star treatment for me, some stunning scary set-pieces set the mood brilliantly before it all fell apart drastically thanks to some stupid plot about Astral out of body experiences and some place called The Further which made the entire film laughable which is not good when it was supposed to be a horror!

I wasn’t even looking forward to the sequel!  What I expected was a rehash of everything we have seen before, especially with all the cast returning.   I’ve seen enough horror sequels to expect the same old, but bigger and louder……..and after the diabolical Paranormal Activity 4, lets just say, yet another haunted house flick to watch was something that filled me with dread!

But how wrong was I! 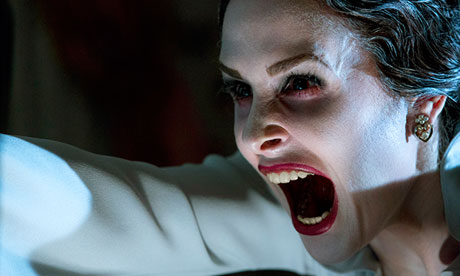 First of all Chapter 2 doesn’t even start off that well!   The opening flashback is a rather lame pace setter that started the first of only two groans that came from my mouth.  The second was when after the cliffhanger that ended the original was sort of explained,  we ended up seeing Rose Byrne’s Renai back in the same house and suffering from an all new but same old ghostly shit!  She even mutters the words “Its not over…..!”to her husband Josh (Patrick Wilson) which made me on the verge of giving up on the entire show!

But then it got all interesting.

The best thing I can say about director James Wan and his  screenwriting cohort Leigh Whannell that they have sat down and decided to play with our expectations.  Here I was thinking that this was heading for a spooky tale but instead what we got by borrowing the words from the Doctor was a timey wimey tale that borders on brilliance from the creative duo.

We all know from the end of Insidious that Josh was no longer Josh but while the original was nothing more than a homage to Poltergeist, here we have nothing more that a film that owes its identity to The Shining and Back To The Future.  An odd mix I know, but that is the only way you can describe the bonkers surreal oddity that shines from the screen.

While the real Josh comes a Marty McFly and jumps between events of the first film, you can see exactly how Wan and Whannell wanted desperately for the Insidious franchise not to become the boring old rubbish that Paranormal Activity became.

Even the lame beginning I mentioned was explained further on……originally I thought “Oooohhhh look there is a door opening…yawn!”, but then later on I was more like “Oooooohhhh look there is a door opening….wow!”…. and the scene was perfectly summed up by the returning Lin Shaye who mutters the words “So that’s what that was!” while looking at her young self.

Also I dismiss the idea that Insidious: Chapter 2 lacks the quality of its original.   Yes the film moves away from the jump scenes that made the first Insidious so great to watch, well for the first twenty minutes, but then Chapter 2 is more determined to tell a story without selling out to cheap scare images.   You cant deny that the bad guy of this film is a brilliant creation with a great back story that gives the film a much dark vibe that it desperately required.

Just looking at the imagery of his dead victims in white while in rows is a splendid set-piece and the tension soaked scene involving fake Josh and and a medium is a written piece of brilliant style thriller that is the standout moment of the entire franchise so far.

Insidious: Chapter 2 has more originality in its box than its original and The Conjuring has to offer.   While those two owed their success to the likes of Poltergeist and the Amityville Horror, this film branches out on its own and gives its best to offer its own much needed identity.  Even The Further plot which I mocked in my original review is expanded here and somehow gives the Insidious franchise a grip to expand into many sequels.

The ending suggested that we are moving into a new direction and that is a welcome surprise and if you wondering what it all meant….just listen to the noise and think of the first film…..then you know why for the first time in this franchise I am looking forward to the next film.

I have seen many fans criticizing the film for being too complicated and hard to follow, but I just love the fact that not once did we end up like many other sequels that follow the same old blueprint….

Wan and Whannell dared to be different in their follow up…… so I ask…….  Why complain??????

James Wan to direct the ‘Aquaman’ movie for Warners and DC?

James Wan used to be best known as a highly skilled horror director, and the genre loved him. Delivering some of horrors finest moments over the past decade or so, Wan has presented us with […]

At last! The first official teaser poster for Ridley Scott’s ‘Prometheus’ has arrived!

Now this is the sort of news which makes us very happy to be alive, and even more happy to be involved with our beloved genre of horror. Ridley Scott’s Prometheus is due for release […]

ANNABELLE COMES HOME (2019) Directed by Gary Dauberman Chucky already returned this Summer, along with Woody and Buzz. But there’s still room for one more franchise toy come to life: Annabelle. She’s back, and this […]