Caligula, the young heir to the throne of the syphilis-ridden, half-mad Emperor Tiberius, thinks he has received a bad omen after a blackbird flies into his room early one morning. Shortly afterward, Macro, the head of the Praetorian Guard, appears to tell Caligula that Tiberius, his great uncle, demands that he report at once to the island of Capri, where the Emperor has been residing for a number of years. There, Caligula, who himself is sexually involved with his own sister, finds that Tiberius has become depraved and showing signs of advanced venereal diseases. Tiberius jokingly tries to poison Caligula and one of Tiberius’ friends commits suicide on the prospect of Caligula’s rule. Caligula is saved from killing the dying Tiberius by Macro, who commits the deed himself, choking Tiberius and now ensuring that Caligula becomes Emperor….. 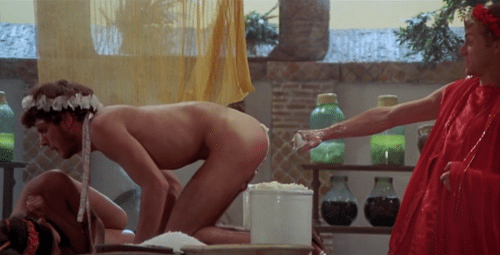 How times change. When Caligula first hit UK cinemas in 1979, it had 11 min cut from it, was widely denounced as garbage, and was even more hacked down for video releases where it very hard to see unless you were savvy enough to read advertisements in the back of certain film magazines advertising rare and uncut movies for sale [I plead guilty]. In 2007, the film received a fabulous four disc DVD set full of special features and three versions of the film including the full uncut version, which contained some hardcore porn shots. I couldn’t believe that you could actually go into HMV and pick this up, but there it was, with all the ‘normal’ films. It’s right though that Caligula was eventually treated so well on DVD, because whatever you think of it, it is an extraordinary, one-of-a-kind film that is hard to believe actually got made. It’s part historical drama and part sex and violence exploitation, and a film featuring pornographic footage that stars major stars, which unbelievably include Peter O’ Toole and John Gielgud. It’s considered by many to be one of the worst films ever made. In whichever cut you watch, and there are more cuts of this film than few others, it’s a mess, and viewing it is sometimes close to the experience of slowing down on a road to watch a car crash – you’re aghast but fascinated at the same time – but it has some praise-worthy things in it, contains traces of a truly fine film, and is just so totally insane you have to kind of admire it if you appreciate films that are off the beaten track.

The project had its origins in a TV series which was to be written and directed by Roberto Rossellini. He died, but Roberto’s nephew decided to turn it into a film, and hired the playwright Gore Vidal to write the script. Only Penthouse founder and publisher Bob Guccione was willing to finance the project. Directors John Huston and Lina Wertmuller turned it down and Tinto Brass came on board, along with a strong cast. Shooting for what became a hugely troubled production began in 1976. Vidal insulted Brass in an interview and was sacked, Brass rewrote much of the script, star Maria Schneider resigned because of the nudity, the budget was too low for such an ambitious film causing set designer Danilo Donati to re-do most of his sets and even causing script changes, and Brass and Guccione kept falling out, mainly due to Guccione wanting more and more sex in the film. After endless delays the film seemed finished, but then Guccione fired Brass for going way over the budget and extensively re-edited the film and replaced some of Brass’s footage with newly shot hardcore porn, supposedly unknown to most of the stars. The release was further delayed by Brass and Vidal launching lawsuits against Guccione. Vidal and John Gielgud got their names taken off the film and few others involved wanted anything to do with it. Amazingly, or perhaps not, it was a success in many countries despite usually being cut and sometimes even banned. During the time span of its post-production difficulties, Rossellini produced a second film titled Messalina, Messalina with the same sets and costumes, and soon after Joe D’ Amato brought out Caligula 2: The Untold Story, which similarly contained hardcore porn.

I could spend ages detailing the different versions of Caligula, and will only mention the main ones. The original UK cinema release lost 11 min of hardcore sex and violence but had 4 min of alternate footage put back in, running 149 min. The most widely distributed US version ran 102 min, removing many dramatic scenes too, though I once saw a UK video on a shelf running as short as 90 min! In 1984 Rosselini released his own 133 min cut in Italy which itself was re-edited at least twice. In 1999 Channel 4 showed a 145 min version [ partly shorter due to PAL speed-up] which contained some alternate footage and some creative panning and scanning. Then in 2007 for the DVD set which also released the original 1979 cut with hardcore, a new 153 min cut was created which not only, as per some other versions, replaced most of the hardcore footage with alternate shots and even some 16 mm shots they found, but re-arranged some scenes in keeping with Brass’s original vision for the film. Recently, Brass has announced that he is going to work on a genuine ‘director’s cut’ of Caligula. I’m not a fan of Brass, whether as an avant garde filmmaker or as a soft pornographer: he seems to me to be a very minor filmmaker with occasional artistic aspirations way beyond his talent, but his cut of Caligula [and it’s probably his best film] should be the definitive version. I wonder if it will include some of the material not included in any version that exists?

Caligula shows you what it’s ‘all’ about in the first half hour, after which it’s not really worth any viewer who is hating the film to continue. It begins with showing him romping with his sister Drusilla, then takes him to Capri where, during an orgy [actually people seem to be constantly having sex all over the place in this movie], Tiberius decides to punish a soldier for drinking by having rope tied round his penis to close his urinary tract, gallons of wine poured down his throat, and his bursting stomach punctured with a sword so both blood and winde pours out. Then we get a totally bizarre scene set in and around a swimming pool where naked women [and a few men] are sitting around. Tiberius, who is riddled with syphilis and therefore looks horrid, cries out: “Come in my little fishes, all of you”, and they dive in while Caligula does a strange march/dance that includes pretending to shoot with a bow and arrow. Then a guy called Nerva [and at least Gielgud wasn’t in the film for long, while O’ Toole soon follows him], is found dying in his pool, having slit his throat, and Caligula tries to get him to tell him what it’s like to die. You have it all in these first scenes: sex, sexual perversion, extreme and possibly gratuitous violence, weird camp, and moments of real resonance with strong acting. It’s these things that make up Caligula, and it certainly is an odd mix, resulting in a work that is terribly uneven, but also in one that is hardly ever dull despite its considerable running time and it being a sword and sandal epic that doesn’t feature much action.

Once Caligula becomes emperor, the film seems to be attempting to show us how power corrupts, though of course Caligula isn’t shown to be ‘quite right’ even at the beginning. There not being a whole lot of tension in the film, something not helped by a few scenes going on for far longer than they need to like an endless death scene where Caligula does far more than just mourn the person, the main fascinations are what insane thing is Caligula going to do next and what shocking image is the film going to throw at us. Caligula makes his soldiers invade Britain naked. He interrupts a wedding to rape the bride on the kitchen table and then out his hand up the groom’s bottom. A combine harvester-type device chops off the heads of people buried in the sand of an arena. Two lesbians wipe the blood of a dead man onto themselves and urinate on him, after which his penis is cut off and fed to two dogs. And so it goes on. The main idea was to obviously show the Romans, at least the rich kind [though there is an interesting scene where Caligula, in disguise, visits a poor area of the city], as they really were, and records do indicate they were often really like this, though the film weakens its aspirations to authenticity a bit by messing around with the facts of its story. There’s no doubt though that Caligula was as cruel, perverted [in fact probably even more – the film just shows him sharing a bed with his horse] and insane as the film depicts him. Malcolm McDowell, seemingly building on certain previous roles like his superb turn in A Clockwork Orange, gives an extremely full-throttle, no-holds-barred performance. This Caligula is horrible, but he’s also very charismatic and you just can’t take your eyes off him when he’s on-screen. Nor can you think of any other actor of the time playing the part so well. O’ Toole just comes across as hammy and Helen Mirren looks lost, but she does get a brief lesbian scene. Caligula is a degenerate, muddled piece of trash, but it’s also quite remarkable in its bonkers way, has bits and pieces of mad genius in there, and is really pretty compelling if you can get past all the sex and violence, which a lot of people can’t. I’m not saying that it should be considered a really good film, and even after several viewings I feel like washing afterwards each time, but it has definite plusses which for me outweigh the minuses, I’m glad it exists, and I sometimes find myself drawn back to the decadence of Ancient Rome as shown by the film so I can again ask myself things like: “What were they thinking? How did this get made?”, and feel a little sad that you’re not likely to see something like this on our cinema screens today.