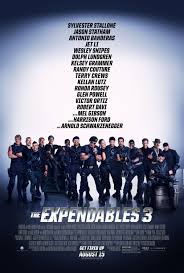 WHAT’S IT ALL ABOUT?

The Expendables are back and all set to face their biggest foe yet.  When on a dangerous mission, Barney (Sly Stallone) and his crew discover that Conrad  Stonebanks (Mel Gibson), the co-founder of The Expendables is alive and well, despite presumed dead by the hands of Barney many years ago.  Once a good guy, Stonebanks turned into a ruthless arms dealer and now his secret is out, wants to end the very gang he helped to create.  But Barney has other ideas and decides to get a whole new crew in to fight this evil mind, but who will come out on top………….

SIGH!…..No seriously….either I make that expression or I will just scream the words…..”What were they thinking?”

When The Expendables came out on 2010, action fans were in dreamland.   Not only did we finally have a love letter to all the 80’s action classics, but also the guys who we loved growing up with, were going to be in it….older and much greyer of course.   Despite it being an action classic, the death of the likes of Stallone and Arnold Schwarzenegger’s careers started when Die Hard came out.  Bruce Willis and his “everyday guy” hero showed the world that you didn’t have to have huge biceps to win the day and when Keanu Reeves was jumping between cars and buses in the sublime SPEED….Hollywood realised that anyone could play the “cop against the world” rules and the likes of Nicolas Cage and Liam Neeson’s careers was born.

Sly, Arnie and co were described as dinosaurs and while Schwarzenegger had the luxury of a new life in Politics….his buddies Sly, Dolph and the rest were soon releasing straight to DVD offerings which offered nothing but glimpses of their former glories.  It was ROCKY BALBOA that showed the world that Sly still had it in him and then when the very violent RAMBO sequel was released, Hollywood realised that there was a new found market for old actors reliving old glories and soon Sly was bringing everyone back for this all new franchise.

The original Expendables worked because it was a glorious love letter and a massive thrill to see all our old favourites back for one last hurrah!  It helped as well that the film was downright violent which made it feel like it should have….an old school mash up.  It should have been dated but it felt fresh and when The Expendables 2 was released with the added bonus of a showdown between Jean Claude Van Damme and Sly himself….a scene worth the watch alone, fans again lapped up the in jokes and violence so much that it seemed nothing could go wrong with this franchise.  If its not broke they say, then don’t fix it….a saying which falls on deaf ears as soon as this third film starts.

Most action films by the time they get to their third film are well established and confident.  Take Lethal Weapon, the original was a dark violent tale with a deranged lead character, by the time the third film came out….Martin Riggs was more friendly and 15 rating but still showed glimpses of being the mad cop we all know and love.  Lethal Weapon 3 may be more softer in style, but it had the right mix and too this day its still probably the most popular one out of all four films.

The Expendables 3 tries to do this approach.  It tries to be funnier….tamer…..but fails on all accounts.  It worked with Riggs and co because we loved the characters and there was scope for the changes to be made.  Riggs falling in love and being part of a family which was worked over in two films was the reason why he was tamer now.  The Expendables can’t offer that depth because of the vast amount of characters on display, so what fans expect is just utter chaos and these actors too do what they good at…..in a violent way.

Sadly we get nothing like this.   By taming the violence and upping the jokes, the film badly loses the very reason why we watching this franchise and with it kills stone dead any love we had.  This at times is so torturous too watch that it feels like a very bad gag and the joke is on us the viewer.  Also and inexplicably, they also decide to move away the characters like Christmas (Jason Statham) Gunner (Dolph Lundrgen) for fresh new blood who we really don’t give a shit for.  Why would I want to watch someone called Luna (Ronda Rousey) kick ass out of some bad guys when I am paying and want to see Statham do that job.  There was always a fear that with such a stellar cast, The Expendables would only offer minor cameos for fans and while the first two films had the right balance, sadly part three does come across like walk on parts for the majority of the cast.

Take for example the beginning and seeing new guy Doc (Wesley Snipes) in action.  Now this part was good because its finally great to see Snipes back on the big screen.  Such an underrated action star who deserves a Blade IV by Toro….and while this is an highlight, it is so fleeting that the next time we see him in action, its right at the end………why???????  I really don’t care about this new guy Thorn (Glen Powell) I want to see Snipes…..but it doesn’t happen until its way too late.

Also the humour is atrocious.  Yes its quite funny to hear Arnie repeat a Predator line, but any goodwill you have is ruined by the disastrous character of Galgo (Antonio Banderas) who is quite possibly the most irritating written guy I have ever seen in any action film.  If the idea was too make Banderas’s Shrek character PUSS, come to life in this, then please…..noooooooooo!!!!   Banderas is so over the top and far outstays his welcome.  Every time he appeared on screen I wanted to throw up and beg for one bullet to make its way and put us all out of our misery.

Harrison Ford and Kelsey Grammer really offer nothing new to the table simply because once more they come across as bit parts and what saddens you the most is the only bright spot in this wretched film, deserves a better comeback.  Yes I am talking about Mel Gibson who lights up the screen every time he appears.  Mel still has that Riggs vibe and showcases why he should be in better material than this and it kind of makes a mockery out of the new Mad Max film.  I like you Tom Hardy, but surely on this display, Fury Road would have been even better anticipated if the original Max was on show?

The action scenes are bloodless and bland which does not bode well as the director Patrick Hughes next film is The Raid re-make and already I have serious doubts after this.  Too much close up action and dodgy effects makes The Expendables 3 seem a more cheap version than before and Hughes really needs to up his game if his vision of that classic action film is going to offer the same intensity of its original.  Even the final showdown between Gibson and Sly is a damp squid that is over before it even starts…..

No doubt the on-line leak which has caused fury in Hollywood will be too blame for the downturn in figures at the box-office when in reality, The Expendables 3 is an awful film which betrays its very own blueprint.  Its dull, boring and at times totally unwatchable.  The franchise is now like the stars…old and creaky and if this was supposed to carry the torch over to the new younger guys they got it badly wrong….

The Expendables The Next Generation…………..they can forget it!

Jackie Chan confirms a role in ‘The Expendables 3’?

Come on, who doesn’t love Jackie Chan eh? The martial arts star is simply dazzling to watch on screen, and is a true gentleman, and if indeed what he has said is true, then seeing […]

We all know that The Expendables 3 is happening, and while I was not exactly blown away with the second movie, it was still a lot of fun. I found Van Damme to be the […]

THE EXPENDABROS Review – Available on Steam

THE EXPENDABROS Available for free on Steam A standalone platformer spinoff of Broforce, The Expendabros is a free to play game, available on Steam, that ties in with the new movie, The Expendables 3, which […]