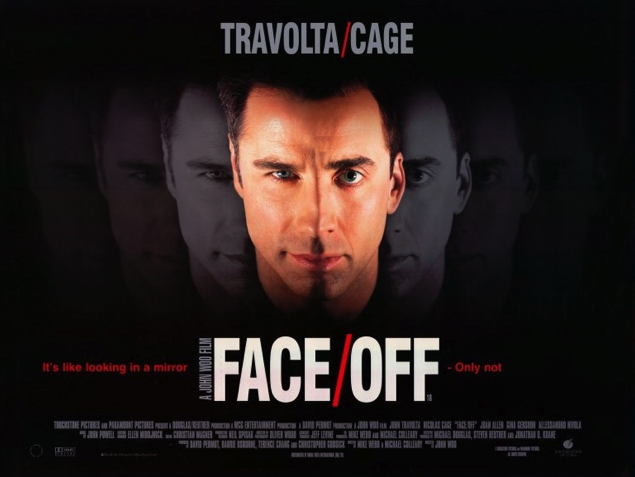 Could have been many!  From the coat flapping in the wind, to the tune of “Somewhere over the Rainbow”, to that mirror scene. and then the infamous Mexican Stand off.  But for me personally, its the moment Archer finds out that Troy has become him.  That reveal is still one of the best Woo moments……

Sean Archer: Well, if you are Sean Archer, then I must be Castor Troy.

Castor Troy: If I were to send you flowers where would I… no, let me rephrase that. If I were to let you suck my tongue, would you be grateful?

In 1997, every action fan was waiting for John Woo to finally deliver in the American market.   The legendary action director who five years earlier, gave the world the stunning classic Hong Kong flick  Hard Boiled was gently easing himself into a new country and his input so far seemed a more of a runny egg just waiting to burst.  His CV at the time for an American audience started with the weird Dolph Lundgren flick Blackjack, where the hero was scared of the colour white, to the underrated Hard Target which starred Jean Claude Van Damme, to the silly but entertaining 1996 attempt Broken Arrow that starred John Travolta.

It was reuniting with Travolta along with a new face to the action genre, Nicolas Cage that Woo a year later finally showed just what he was capable of.  Face/Off with its ludicrous plot should never have worked and before it was even released, the concept had many laughing simply because what action fans were getting were two men having the brainless notion of swapping faces.  Even typing that now seems daft and idiotic but by the end of 1997 , it had become one of the biggest grossing movies of the year and even now 17 years later,  Face/Off is rightly considered one of the best action films of all time.

Face/Off starts with the usual 90’s action trend of killing off the unexpected.  Ever since Sly Stallone scaled the rocky mountains and failed to hold onto Sarah’s grip which saw her plunge to her death, many films jumped on the bandwagon.  Here its a small scene but wonderfully sets up the tension between the good and bad. Archer  (Travolta) is on a merry go round with his son while in the distance his nemesis Caster (Cage) is holding a snipers riffle.   Castor with no remorse and in cool typical slow mo Woo fashion, pulls the trigger to kill off the cop who has been hunting him down.  The bullet goes through the body of Archer and instantly kills the poor innocent boy.   Its an early set up of the carnage that will follow and the pivotal moment that makes Archer so determined to get this guy, at any personal cost.

The film skips a few years and Archer is still haunted by the tragedy.  Castor is more crazy and importantly still on the loose and is planting a bomb in the city.  Archer gets news that Castor’s brother has booked a plane and rushes to the airport.  Its during this we see the first hint of how cool the entire movie will be.  With the credits still running on screen (yes its barely five minutes in and already we have a child’s death, a planting bomb and a juicy plot), Caster gets out of the car with his black long coat flapping in the wind, in a cool slow iconic moment.  If by then you have failed to realise that you are watching something special, then you really need to question your film judgement, because while in 1997 this was a stunning blast, now it just comes across as wonderful action classic moment.

What follows is lines like “How would you like to suck my tongue” to Archer chasing down the aeroplane in an all out gun fight battle that feels like it should be at the end of the movie not at the beginning.  Not many films start off in such frantic and furious fashion and we even get a confrontation between the two which ends up in a gun fight, fist fight, knife fight, while Castor sings along to the lyrics of “Ready, Ready for the big ride baby!”.   The result leaves the bad guy in a coma and Archer finally gets the peace he needs.  Even if the credits rolled then, most fans would have been happy as we have had a plot that most films would need 90 minutes to cover.  A bad guy kills the cop’s son, cop hunts him down….massive fight….cop wins!.  But in Face/Off, this is nothing but the calm before the storm,

With that bomb counting down to that plague that LA deserves, Archer needs to find it otherwise Caster will have won the final battle.  Despite trying to get the information out of the many friends of the now comatose bad guy, the answers are not coming and Archer is informed of a new medical procedure that will make him become the very man he hates.   By removing the face of Caster and putting it on his own….(yes crazy) and removing the love handles, adding a voice chip to his vocal chords, and with a swift haircut. he can become Caster and enter a secure prison to get the information of the bomb from the brother.  No one will know of this convert operation, not even his family and while reluctant at first, Archer knows its the only way he can save innocent of lives and so embarks on the procedure.  He wakes to find himself now as Caster ( with Cage now becoming the character of Archer) and he enters the prison to seek out Pollux ( Alessandro Nivola).  Unknown to him through, the real Caster awakes from his coma, discovers what has happened to his face and so becomes Archer ( with Travolta now becoming the character of Caster) and kills only the few people who knew of this deep undercover plan.  With the real Archer who is now in the body of Caster discovering the whereabouts of the bomb and believing he is free and out of prison, his world comes crashing down when he is visited by the real Caster who is now in the body of Archer, who gently tells him that he is going to spend the next 100 years in prison and he himself, is off home to fuck his “wife!”.

Phew….get your head around that!

In the 80’s what we had was a massive trend of “body Swapping films”.  From Vice Versa to Like Father Like Son, the genre was popular for the film-goers in that era and while we have the bonkers “Face cut off” plot vice, this is more or less a body swap film without the mystery Sci-Fi edge.  What sells the film and why it has emerged as the “Cult Action Classic” is because of its two stars.  Travolta and Cage are clearly having a blast in the roles, relishing their moment of being good or bad and clearly aping each other when the script calls for it.  Its also a credit to them both that when each take a turn of being the good guy, its the character of Sean Archer we are rooting for and not the actor who is playing him.

The support cast all play a pivotal role in this memorable film.  Joan Allen as the confused wife adds quality while the likes of Dominique Swain and Gina Gershon makes you wonder why they never had a big Hollywood career.  But giving free creative control for the first time in Hollywood, John Woo stamps every mark of his onto the screen.  Yes there are moments of amateurish direction, a cop gets blown up in the air with the wires clearly showing and the moment where Eve (Allen) is in the hospital, you can clearly see Cage hiding in the background.  But apart from that, the slow mo…the white doves, the manic over  the top action scenes, this is a lesson in action poerty by Woo which he himself sums it all up with a twisted take on “Over The Rainbow” which will make you never watch Wizard Of Oz with the same eyes ever again.

Originally intended with Sly Stallone and Arnold Schwarzenegger in the lead roles, Face//Off typifies everything that 90’s action was.  An over the top extravaganza that had fans throwing their popcorn in the air.   It is the perfect action film!  An all blaze not seen since the days of Die Hard.  Yes, its not in the same vein as HEAT which was deep and realistic, but simply because this does not live in the same world as De Niro, Pacino and that coffee shop.  Face/Off is simply designed to entertain no matter what and the fact it does so convincingly as it makes us blind to the obvious dumb plot holes that engulf the entire show, it should be applauded.

You can argue that Cage has been in an even more insane action film than this (Con Air?) but for Travolta, he has never been better! and as for Woo?  Its worth remembering that while this was his best American action film…..it still does not hold a candle to some of his Hong Kong work and that for alone is worth in the words of Caster himself….  “Oh, bravo. Bra-fucking-vo!”……