Jack Bauer, the former CTU Agent who has saved the world nine times, four more than John McClane, is currently living his life in a Russian cell.  Not exactly a fitting end to a man who put his life on the line on many occasions for America and at one stage, London. It weren’t the end us fans of 24 expected or wanted for our man, especially as we were told that last year’s special “Live Another Day!” would bring closure to the long running and legendary show.

Rumours of a film have been bubbling around for years, but its hard to get the structure of the premise of 24 into a film running time, unless you make it 24 hours long.  I have often thought that the writers should set it for 2 Hours and 40 minutes, so it keeps some logic of the 24 symbol (just ignore the o at the end of the 4), but with scripts being rejected and then remade into the likes of Olympus has fallen, and with FOX not rushing out a next instalment after the mini success of the nightmare day 9, it seemed for fans of Bauer, what we had at the end of LAD, was that controversial ending, which lets be honest……was awful,

Now yesterday we had news that 24 may finally be returning….YAY!!!…..but then came the twist….without Kiefer Sutherland in the signature role.  Now I like many saw this and screamed anger at the stupidity.  Its like making a new Buffy without the proper slayer, or The Walking Dead without a Zombie.  Jack Bauer is the integral clog of the entire franchise.  We want to see him continue to have bad days, to be brought to the brink of despair and win against all the odds.

I was furious……shaking my head and coming close to burning my DVD Collection in protest………but then I started thinking….and I thought some more, and then I began to realise, that perhaps this is exactly what the show needs…..  one day without our Jack….. 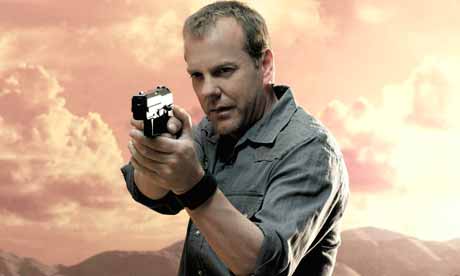 I am not going to lie but whenever the clock starts ticking on a day without our Jack, the first hour will be hard and it will be a true test of how strong the concept of 24 is.  Sutherland has always said that he is not the star of the show (but you are Kiefer), and that the real time clock is the reason why the show is so addictive.

He does have a point. When 24 is on form and there were glimpses on LAD of the old magic, there is nothing better on TV.  So for fans everywhere who have moaned that the quality has dipped since Day 5 and everything is the same cliché, having a fresh start may work wonders for long loving fans.

Having a brand new nightmare day, with someone else in the lead role, without past issues and memories may set 24 onto a whole new path.  A day without the baggage Bauer brings to the show may actually work in its favour.  But the writers have to make it fresh and original.  The script needs to move away from Presidential assassination attempts and Moles in the background.  No Nuclear bombs in suitcases or the usual plot traps the writers have always fallen into.

There are numerous ways an all new day can go and its vital we have that otherwise we just have a show replicating its past glories without its main star.  There are whispers that CIA Field Operator Katie Morgan (Yvonne Strahovski) may step into the lead role after appearing in LAD, a notion that I hope won’t happen unless the day in question leads up to another day of Jack returning.   I can see the logic of getting some familiar faces back in a storyline that hopefully would involve the eventual release of Bauer from the prison cells.

It would be quite something to see a full day of old faces coming together to free our Jack. The greatest strength of 24 is also the eventual shows weakest.  I mean won’t it be great to see people like Bill Buchanan back at CTU, that bastard Chappelle being awkward, President Palmer leading the way and somehow that evil bitch Nina holding the key.  All reuniting for one last hurrah to see Jack free at last.  Sadly all the much loved characters we grew to love have all been murdered or died in a final act of bravery.   But there are a few still lingering.   Chloe is a must in any day, while there must be a reason why Tony Almedia was included in the extra scene of the LAD DVD set.  Just having these two would add the old time viewers and if Katie is the replacement, the storyline must be a new one, which somehow eventually ends up getting Russia involved and leading to a trade off with Jack’s eventual release.  It be kind of ironic and somewhat fitting that the end of the new day will see Jack being released thanks to the help of other people, without him risking his life once more.

If there are going to do a day without Jack and it doesn’t offer us that eventual outcome, then I hope 24 does not have these characters on a mission that has no connection to Bauer, because like I said, it be kind of pointless.

I would not mind just a day of an all new hero, an all new cast, people we don’t know if we can trust or not.  It does not even have to be something grand like the nuclear bomb in Day 2, just grounded, realistic and that ticking clock bringing thrills and spills.  That is something that could actually work and in some ways, FOX and the franchise really can not lose.  If this day fails to inject a fresh adrenaline rush, the obvious marketing ploy for a further adventure with be the return of Jack, because fans will demand it and money talks in the land of TV Making and having our lead role back for what will no doubt be for one last day, would bring much interest and hype.

The fate of 24 really does rest in the hands of the creators of the show.  LAD was good in stages, but just failed to grasp like it should have.  Even the climatic ending which saw Audrey die was nothing we had seen before, even Jack’s rage was glimpsed way back when he was told his daughter was dead at the finale of day one.

Sadly being one of 24’s biggest fans, the show has never recovered since the ground breaking and greatest fifth day.  What has happened since,minus the first opening hours of day six which were remarkable, the show has tried to reach those heights but have failed.  The four year break done the show some good, it seemed fresh and watching Jack once more in action was something fans loved despite how it ended.

If 24 returns without him, the overall plan must be good or the show could eventually die. Never has there been so much pressure on those behind the scenes.  Get this right and we could be talking about a show that will forever be around in some kind of form, failing too and that ticking clock which has survived more cliffhangers than any show put on screen, may end up stopping for good……

24 The Movie update: “We’re running out of time for a script!”

In the words of my hero, Jack Bauer, Imagine Entertainment and 20th Century Fox are “running out of time!” That is what they have told Mark Bomback (The Wolverine, Shadow Divers) who has been commissioned […]