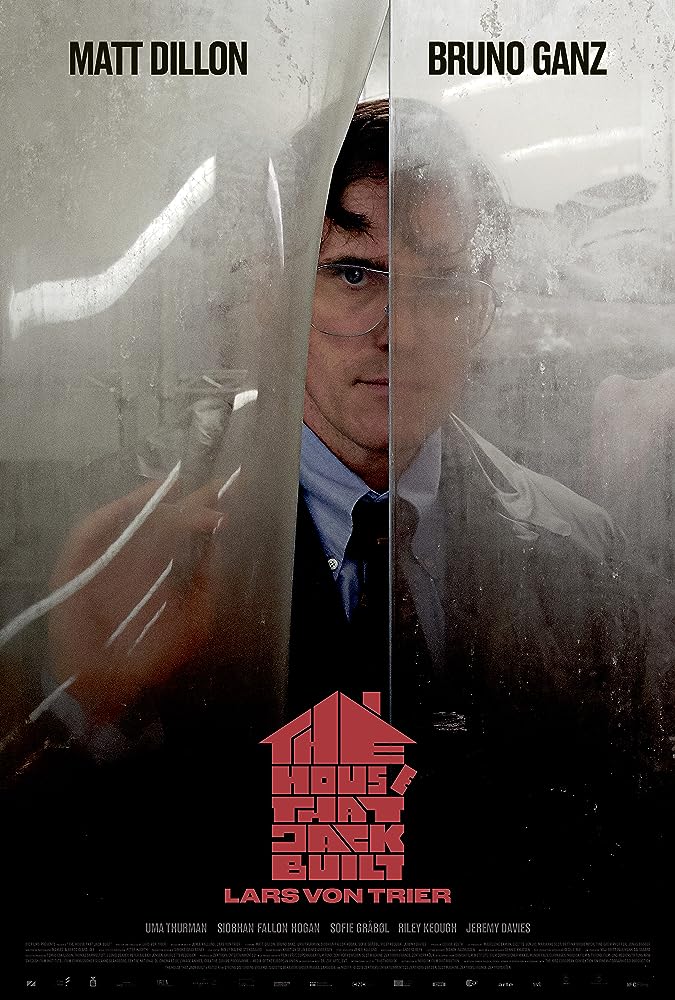 THE HOUSE THAT JACK BUILT
Directed by Lars von Trier

Having based much of his career around pressing the right (or wrong, depending on how you look at it) buttons, Lars von Trier is no stranger to controversy. Since touting the Dogme 95 concept, he’s been widely regarded as a provocateur, creating ever darker films about a world he seems increasingly pessimistic about. Recent efforts, especially Melancholia, have overwhelmed the audience with their unrelenting bleakness. Yet behind the nihilism, there’s often been the signs of a joker, sharing a wink with his audience. As such, I expect no small part of him was delighted when his latest offering, The House That Jack Built, prompted mass walkouts at its Cannes premiere.

On face value, it’s not surprising that critics were divided. Framed by a conversation with Virgil, Dante’s guide to Hell, the film focuses on five incidents in the 12-year reign of its titular failed architect turned serial killer Jack. These events range from him picking up then killing a hitchhiker (Thurman) by the side of the road, to physically and psychologically torturing his girlfriend (Keough) before getting creative with his knife. All of them are drawn out and shot in graphic detail. Afterwards, their bodies, big or small, are kept in a giant walk-in freezer, alongside numerous supermarket pizzas. There, he moves and manipulates them in a way not dissimilar to a movie director (I’ll come back to that), before photographing them to turn them into art. It’s this habit that results in Jack getting the ironic nickname Mr. Sophistication: a contrast between class and violence most notably conveyed in Hannibal. If only Jack were such a well-pronounced character. We spend a lot of time with him yet, despite Matt Dillon’s best effort, we don’t get to know Jack. There are chinks of his unique character smattered throughout, and he’s downright chilling in some scenes. For instance, seeing him teach himself facial expressions is a twisted joy to behold. Likewise, his OCD – which is used to great effect in the first third – leads to some laugh out loud moments as well as giving him some much-needed vulnerability. Yet for all the talking he does, Jack is afforded very little psychological depth save for a few idiosyncrasies, an interesting metaphor about lamps (that the narrative points out could be applied to anyone) and a vague childhood memory or two. As per the events episodes themselves, it’s a lot of content that adds up to fairly little. There’s no clear throughline, except Jack’s getting a bit worse. It’s not just him either – the victims are also scantly characterised, with large parts of the story requiring them to act in unbelievably stupid ways. A contrivance made no better by the film pointing it out. I’ll afford von Trier the benefit of the doubt, that he wanted us to view them as means to an end like Jack, but it doesn’t make for an emotionally engaging watch. In past films, he’s also treated people like symbols or plot devices, yet we sometimes still cared for them. Whereas even when we come to the relatively few money shots, outside the fourth incident it’s hard to feel much for any of them except some discomfort. Ultimately, the script seems more interested in treating the scenes as vehicles to explore big ideas than it is people the people in them. I suspect this may be because Jack is less a character than he is a semi-ironic author insert. von Trier is very much an auteur, and nowhere has is introspective nature been more apparent than The House That Jack Built. That’s right – this is maybe the closest we’ll get to a memoir. Musing over his own mythology, Lars confronts his critics on everything from the understandable accusations of misogyny and misanthropy, that have followed him his whole career, to his infamous Hitler comments. Predictably, he doubles down on all of them in his postmodern interrogation of the limits to art and the meaning of murder. For hardcore fans, this feature-length therapy session is probably a good thing, and I have no doubt many will love the boldness of his cinematic mic drop. Though to people who may have liked some of his flicks but think he’s a self-important ass, it’s more fuel for the fire. Falling into the latter camp, I found the repetitious meta layer to be to the detriment of the film that’s, presumably intentionally, as self-aggrandising as its loathsome protagonist. It was like he’d entered my local cinema then wanked all over the screen. The longwinded, in yer face didactics about grapes, arches and suffering were sometimes engaging – with a powerful subversion of Checkov’s gun being the standout. Though more often than not they detracted from an already bloated narrative as both the character and the director found new ways to ask us to believe depravity = art. In particular, a sequence about real violence as an iconic form of self-expression gives way to an indulgent reflection on how fictional violence works off the same impulses. This is followed by a montage of unsavoury clips from von Trier’s own back catalogue, before Jack removes the camera from his tripod, to replace it with a rifle. Wow – see what he did there? And whilst it’s perhaps a sign of his progress and growth that he consigns his bad bits to Hell, did we have to spend so long in purgatory first?

At 2.5 hours it’s a real arse-tester. It didn’t have to be either. But given how shallow and disposable the people in it are, almost every scene feels like it goes on longer than it needs to. On balance, the final pay-off is worthwhile, with the last 20 minutes boasting some of the most striking imagery of von Trier’s career. But with a tighter, more focused edit it could have been more welcome an hour earlier. Still, something I will praise it for is the pitch-black sense of humour that just about keeps it going. I’ve never regarded von Trier as especially funny, so this was an unexpected surprise. In a sense, the gallows humour is a necessity for a) balancing out the movie’s tone and b) allowing us to build rapport with the protagonist. And at points, it’s downright hilarious, with von Trier finding the right bad-taste humour even in his nastiest scenarios. It isn’t all one note – there’s even some slightly twee bits too, like the Bob Dylan allusion shown below. Yet it wasn’t enough to make me invested in the character’s “journey”, and even detracts from some parts in the gorier second half. Make no mistake, the movie’s sometimes a difficult watch, with sustained threat sequences and excruciating makeup/ effects. Yet for all its controversy, The House That Jack Built is surprisingly tame and, at its worst, dull. True, there are maybe a handful of genuinely disturbing images in there, though against the running time each is an oasis in a dry desert. Thus those expecting to see something akin to A Serbian Film, Grotesque or even Von Trier’s own Antichrist will be disappointed. Yet I expect the feeling will be mutual for those expecting a slow, meditative and substantial character study ala Henry. So we’re left with a movie too trashy and shallow to be a serious character piece and too boring to be a grindhouse stunt. You know, maybe it wasn’t disgust that made people walk out…

The House That Jack Built will be released Uncut in the UK 04 March, 2019, on DVD/ Bluray and VOD.

Sadly Lars Von Triers sex epic, Nymphomaniac, had a blink and you’ll miss it cinema release here in the UK. Now all we can do is wait for the DVD and Blu-ray, which arrives […]

Oh my! Are you easily offended by sex on screen, are you sitting at your work desk? If the answer is yes, then DO NOT watch the below teaser for Lars Von Triers uncut directors […]