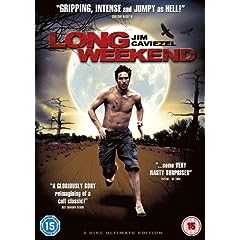 A new week and another re-make of the horror variety to hit the market.  Long Weekend a re-make of the 1978 Australian classic arrives with hardly no hype or marketing, maybe the terrible feedback from the much similar “Nature fights back” theme flop The Happening, scared the studios who just wanted this out of the way and forget about it, which is a rotten shame as this is superior to anything that the Shyamalan flick offered!

Anyone who as not seen Colin Eggleston original, should really get their hands on that before even attempting to watch this.  It is such a 1970’s weird but stunning horror that it flopped at first but soon found its voice and heart as is now considered to be one of the most cherished films from that decades “New Wave” cycle.

This fact must have not gone unnoticed for Jamie Blanks, born in the country and having carved out a name for himself as a horror director, his Urban Legends feature was a massive success thanks to the Scream boom and then he crashed and burned with the quite dreadful Valentine and then redeemed himself with Storm Warning which like Long Weekend was set around the lavish border of the Austrailian country.

As Blanks makes the wise decsion by not doing a Psycho shot for shot re-make, the fact that its called Long Weekend does go against it.  Originally called Natures Grave it would have been best served if it stayed under that title and played like more of an homage to the classic as the film and Blanks is under enormous pressure to carry the original’s style and fear of dread.  The fact that for some parts it does is a great achievement for everyone involved, its just its those moments that are the carbon copy scenes.

Blanks also shows great restraint in not selling out to re-make traditions and aiming for more blood and bigger set-pieces, instead focusing on character build and slow pacing which delivers a great sense of impending doom that a film of this “nature” requires.  Its also worth pointing out that the two on show Jim Caviezel and Claudia Karvan are wonderful.  Honestly!  Caviezel in particular whose Peter is such a smug prat that you just want to smack while Karvan’s Carla comes across quite stuck up and at times a right bitch, that its a refreshing change to see a horror not asking us for sympathy but joining in with natures revenge at the despicable two human characters on show.

And they are!  With their marriage on the rocks and hoping for a weekend to get some sort of sense of their life together back.  A road trip that involves littering, killing an animal and total disregard to what is around them, what  is supposed to be a gentle and relaxing weekend is soon filled with dread and terror. A taste of revenge from mother nature who is no doubt getting pissed off with the way us humans just believe we can treat the world anyway we want too!

For most of the running time and to my total surprise that for a re-make, its quite effective and solid.  The only reason on occasions it loses its power is when it sways from the original theme.  It at times unwisely puts its foot into the Supernatural genre and so gives us viewers questions that can not be answered.  The keep out sign as they enter this uncharted world, what Peter finds in a nearby abandoned Camper Van and also a Manatee that creepily moves up the beach, gives an indication that the place they are staying in as a haunted vibe and sets the film on a dangerous crossroads to what it really should be about!

Its too polished to be a match for the grainy realistic looking original, but for a straight to DVD release its a pretty good watch.  You do not get that pointless echo going around your brain, and its much better than many horrors that get released at the box office, especially a certain Mark Whalberg film that had us watching him being chased by the wind.  At least this a something more constructive and a more creepy tone that may make you have a bit more respect when you see one of Natures loving creatures…..

OVERALL: One of the shocks of the year for me.  No way did I expect this to be any good, the fact that its half decent and a good stab at a 70’s classic, makes the viewing all the more pleasing, its a just shame the film loses its way on occasions, otherwise we may have been talking about something special

The HorrorCultFilms Podcast – Episode 7: Jamie Blanks and Urban Legend In this episode, David and Ross were thrilled to speak with Jamie Blanks: the director of Valentine, Storm Warning and, of course, Urban Legend. […]