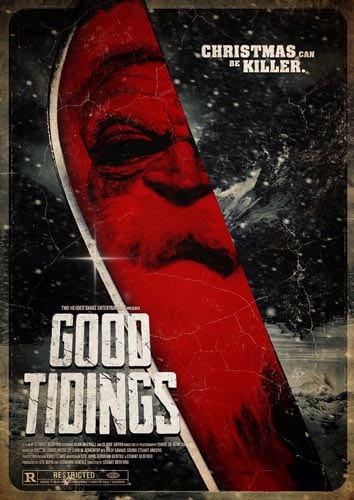 A homeless war-veteran with a chequered past must rely on a side of himself once thought buried when he and his companions are targeted on Christmas Day by three vicious psychopaths in Santa suits.

When the Slasher boom was in full force in the early 80’s, it was the 1984 entry Silent Night Deadly Night that is often referred to as the film that put the nail in the genre that was making so much money for those creating them.  Its not that the film was awful and its quite rightly considered a cult classic, but after Michael Myers terrorised those on Halloween and Jason returning to Camp Crystal Lake over and over, the sight of Santa Claus, going around murdering people was too much for those already alarmed at the huge popularity of the gory horror trend.

A massive backlash started that burst the bubble on the slash genre, even though films still churned out on the Hollywood machine, but things were never the same after Billy Chapman put on that red suit and decided to play a game of mistletoe and wine!  Black Christmas was the first horror film I can recall that took the rosy idea of the festivie period and turning it on his head and there have been a few since, from the daft killer snowman in Jack Frost, to 2005’s Santa Slay, that had the big man in a full murderous rage.  It seems though that in recent years the trend is coming back, with the likes of  Krampus and A Christmas Horror Story all being released to critical and fan acclaim.

So to complete the circle of life, Stuart W. Bedford has directed and written along with Stu Jopia and Giovanni Gentile a horror film born from the peak era of those 80’s classics.  If you love slasher films and are crying out for something to remind you of how good the genre was back in the day, then Good Tiding is the film for you!

Let’s get the main negatives out of the way, yes I know it looks cheap at times, with the imagination on show going way above the budget and yes, the acting is ropey on occasions, but so was many slasher films back then, I mean you don’t watch Friday 13th Part V for its Oscar worthy acting do you?

What Good Tidings manages to create is a perfect love letter and I got to be honest with you, the franchise needs it.  With MTV watering down Scream for the small screen ( I am still getting over the dire Halloween special), the trio behind this gives us horror fans exactly what we want.  With Found Footage horror and everything ghostly at the moment just bombarding every release, Good Tidings sticks out like a sore thumb.  Its violent, gory, old fashioned, but a stunning achievement and already destined to be a cult favourite for many years.

The plot is simple!

In a change to Slash blueprint, instead of one killer, we have three psychopaths all dressed up as Santa Claus who arrive at a disused Courtroom where a bunch of homeless people are staying over Christmas, with the sole intention to just murder everyone there.  No backstory, no motive, the simplicity of this film is one of the reasons why it works so wonderfully well!

Locking everyone in, the place becomes a battleground between those who were just seeking shelter and the three crazed killers while standing in the midst is Sam (Alan Mulhall), a war veteran who decides to go all John McClane for the day and fight back and save those he can with ex heroin addict Roxy (Claire Crossland) alongside him.

As that is it for the plot, the best slashers live by their set-pieces and the film has enough gory scenes to have the bloodhounds clapping from start to finish. Broken necks, stabbed eyes, heads chopped off, the tiny budget may be evident but you be too busy having fun to care! Even the fantastic music score owes so much to the work of John Carpenter and I say that with the highest praise as it fits right in to the 80’s style feel!

Its hard to come up with an original boogeyman so to put in a trio is an ingenious move and each of them carry their own personality and threat, from a limp, sucking on a candy cane, to even deep heavy breathing, the trio are a such a delightful creative hook that I just loved every time they were on screen. Played by Liam W. Ashcroft, Stu Jopia and Alexander Mounsey, you can just tell that the three are having a blast and enjoying each murder scene with relish.

A UK horror based in Liverpool was not on my radar for being one of the best horror films of 2016 but Good Tidings sets out to honour the genre and does such a wonderful job. I loved the Jason mask riff at the beginning, I adored the Halloween homage of the trio in the car passing Sam and his friend before they entered the homeless shelter, damn there is even a Die Hard gag mixed in with Home Alone, yep! you can see I invested so much into this film and the reason why is so simple! It was worth it!

Good Tidings is the slasher film that genre lovers of old will adore, its an old school bloodbath that reminds you of an age where these kind of films ruled at the box office.